The Truth about Thanksgiving

Though Thanksgiving is a secular holiday, it is most assuredly NOT a secularist Holiday.

Secularism as an ideology seeks to exclude religious influence and the values informed by religious faith from our common life. This American holiday called Thanksgiving has a profoundly religious core. So too does the American experiment.  The Declaration of Independence, the Birth Certificate of the United States of America proclaimed: 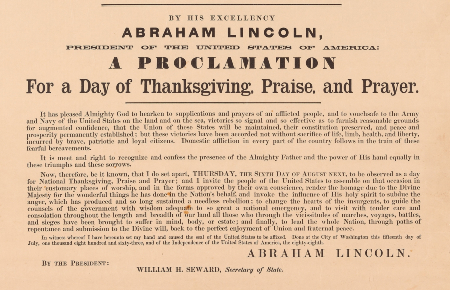 From the beginning, Thanksgiving has been about giving thanks to God above.

"We hold these truths to be self-evident, that all men are created equal, that they are endowed by their Creator with certain unalienable Rights - that among these are Life, Liberty and the pursuit of Happiness. That to secure these rights, Governments are instituted among Men."

The American founders believed there were objective truths - and that those truths are self-evident. They affirmed we all have unalienable rights given by a Creator. No matter how diverse the American founders were, they recognized that those unalienable rights were not given by civil government - and could not be taken away - by civil government.

They believed that these truths and rights can be discerned by all men and women because they are revealed by the Natural Law which is written on all human hearts. Standing in the Jewish and Christian tradition, they also affirmed that the Natural Law is a participation in God's eternal law.

Of the 56 men who signed the Declaration, Charles Carroll of Carrolton, cousin of the Archbishop John Carroll of Baltimore, was the only Catholic signer. At the time of his signing, it was illegal for Catholics to hold public office or to vote in Maryland. Yet, he still pledged, with all the signatories:

"And for the support of this Declaration, with a firm reliance on the protection of Divine Providence, we mutually pledge to each other our Lives, our Fortunes, and our sacred Honor." He knew the importance of the vision of freedom, rights and liberty which that Declaration proclaimed in those three profoundly simple but supremely powerful words: "We Hold These Truths."

All men and women are still created equal and endowed by the Creator with unalienable rights. And, there is a reason life comes first. Rights are goods of the human person. There must be a living human person to receive them and exercise them.

On this Thanksgiving Day we will gather around the table as families and give thanks to God for the liberty and bounty He has given to us as a Nation. There is a reason our national motto was and still is In God We Trust.   We must rediscover that reason once again.

I want to mention three of many challenges we face in the United States of America. I do this with an abiding faith that God truly loves this Nation - and is ready to help us find our way back to true greatness. That involves once again affirming His role in our life together. As Christian citizens of the United States of America, we are called to help the Nation we love at this vital moment in our national history.

The restoration of the recognition of the Right to Life must be our first priority, along with the restoration of true marriage and the family and a return to foundational moral values. Every procured abortion takes the life of an innocent human person, our neighbor in the first home of the womb. All the American founders would have agreed it is wrong to kill an innocent neighbor. How can we read Jefferson's words, "God who gave us life gave us liberty" and not see the evil of the intentional taking of the life of our youngest neighbors in the womb of their mother?

Legalized abortion must come to an end. The Right to Life must again be recognized and secured in the civil law of this Nation.  Saint John Paul II wrote the "Gospel of Life" (Evangelium Vitae) in 1995 and warned of what he called a "remarkable contradiction" which has been unleashed at the "level of politics and government". He cautioned us all of us concerning the emergence of a "tyrant State" and the "death of true freedom", noting:

"(T)he process which once led to discovering the idea of "human rights"- rights inherent in every person and prior to any Constitution and State legislation- is today marked by a surprising contradiction. Precisely in an age when the inviolable rights of the person are solemnly proclaimed and the value of life is publicly affirmed, the very right to life is being denied or trampled upon, especially at the more significant moments of existence: the moment of birth and the moment of death - the original and inalienable right to life is questioned or denied on the basis of a parliamentary vote or the will of one part of the people-even if it is the majority."

He pointed to the rejection of objective truth as the problem:
"This is the sinister result of a relativism which reigns unopposed: the "right" ceases to be such, because it is no longer firmly founded on the inviolable dignity of the person but is made subject to the will of the stronger part. In this way democracy, contradicting its own principles, effectively moves towards a form of totalitarianism.

"The State is no longer the "common home" where all can live together on the basis of principles of fundamental equality, but is transformed into a tyrant State, which arrogates to itself the right to dispose of the life of the weakest and most defenseless members, from the unborn child to the elderly, in the name of a public interest which is really nothing but the interest of one part".

We must come to the defense of marriage and family. If we had the ear of the American founders today, would anyone argue that they would have viewed marriage and family as expendable, capable of being redefined by judicial fiat or a feat of legislative alchemy? The two parent, man/woman, marriage bound family was viewed by all of them as the first society, first government, first school, first economy, first church, and first mediating institution.

We must help the Nation we love return to the moral values which informed the American founder's vision of a truly free society. In a letter sent to the First Brigade of Massachusetts in 1798, John Adams wrote, "Our Constitution was made only for a moral and religious people. It is wholly inadequate to the government of any other."

The American founder's vision of a good society proceeded from their belief in a common morality upon which this virtuous and free society could be built. The classical vision of happiness included the embrace of the moral life. Only with such an embrace could human persons flourish and find happiness. And, though they held differing religious convictions, at various levels of practice, they acknowledged the irreplaceable role of God in guiding the affairs of men and women and Nations.

As a Nation, we must once again embrace and acknowledge our reliance upon God.

Time to Return to God

The mistaken idea that freedom can be divorced from the moral norms necessary to govern our choices and guide our behavior is simply wrong. When there is nothing objectively true which can be known by all and form the basis of a common life then there is no true freedom.

On April 18, 2005, in a homily preceding his selection as Pope Benedict XVI, Joseph Cardinal Ratzinger asked a probing question:

"How many winds of doctrine have we known in recent decades, how many ideological currents, how many ways of thinking? The small boat of the thought of many Christians has often been tossed about by these waves - flung from one extreme to another: from Marxism to liberalism, even to libertinism; from collectivism to radical individualism; from atheism to a vague religious mysticism; from agnosticism to syncretism and so forth. Every day new sects spring up, and what St Paul says about human deception and the trickery that strives to entice people into error (cf. Eph 4: 14) comes true".

"Today, having a clear faith based on the Creed of the Church is often labeled as fundamentalism. Whereas relativism, that is, letting oneself be "tossed here and there, carried about by every wind of doctrine", seems the only attitude that can cope with modern times. We are building a dictatorship of relativism that does not recognize anything as definitive and whose ultimate goal consists solely of one's own ego and desires".

Benedict affirmed that freedom was also the mission of Saint John Paul, "when, in face of all attempts, apparently benevolent, in the face of erroneous interpretations of freedom, he underlined in an unequivocal way the inviolability of the human being, the inviolability of human life, from its conception until natural death."

Catholics, indeed, all Christians, together, must champion true freedom in an age rushing toward a new form of slavery masquerading as freedom. The work of exposing the "erroneous interpretations of freedom" was integral to the message of Pope Emeritus Benedict XVI. In one of his seminal works entitled "Introduction to Christianity" he wrote: "One could very well describe Christianity as a philosophy of freedom." And it still is.


As we pause with of our fellow Americans to give thanks, a question should be considered by all of us together. Are there still self-evident truths and unalienable rights? As Christians, we affirm that there are.  And, on Thanksgiving Day we should recommit ourselves to proclaiming them afresh to the Nation we love.

And we should thank the Lord for our faith, our family and our freedoms.