A leaked document reveals the Supreme Court will finally strike down the Roe v. Wade decision that legalized abortion in the United States in 1973. The decision will leave the question of abortion up to the states. It is unknown who leaked the decision. 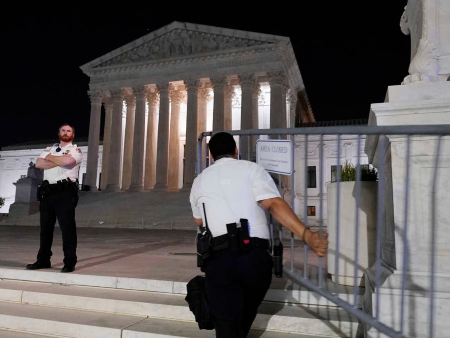 Public pressure could provoke the justices to change their decision.

LOS ANGELES, CA (California Network) - A draft majority opinion written by Justice Samuel Alito has been leaked to the media by an unknown source inside the court. The opinion reveals the court voted to strike down the 1973 Roe v. Wade decision, which legalized abortion in the United States. The new decision now makes it possible for individual states to ban abortion.

The decision appears to be supported by justices, Alito, Thomas, Gorsuch, Kavanaugh, and Barrett. Roberts may be undecided. Breyer, Sotomayor, and Kagan are opposed.

The document, authored by Alito, says "Roe was egregiously wrong from the start... We hold that Roe and Casey must be overruled... It's time to heed the Constitution and return the issue of abortion to the people's elected representatives."

Casey refers to the 1992 decision, Planned Parenthood v. Casey, that claims women have a right to an abortion.

The document is labeled, "1st Draft," and "Opinion of the Court."

While the news contained in the draft opinion is joyous for the pro-life community, such celebration is premature. And there are other, substantial concerns.

First, the decision does not end abortion, but leaves the matter to the states. This means some states, such as California and New York will not likely see abortion end, or even curtailed, Instead, it is likely to increase, especially if people travel from other states to have abortions.

Second, the decision will rally opponents to the left. Whereas the Democrats faced a tough midterm election and their chances for the 2024 presidential election were grim, this issue could make them viable once again by galvanizing previously lackluster support.

Third, the decision can change. Draft opinions are far from final, and justices can change their opinions, even up to the last minute. The announcement on this case isn't due for at least two months, which gives plenty of time for pressure to bear.

Fourth, the pressure from the public, thanks to the leak, could prove overwhelming. It will divide the country sharply. Perhaps enough that one or more justices may change their decision, or the decision could be rendered even less effective in the face of public pressure. Police scrambled to erect barricades at the court, and protests are ongoing.

Fifth, no decision of the court has ever been leaked. The Supreme Court is not like any other political institution, and the leak undermines the integrity and credibility of the court. If confidence in the court becomes shaken, if the court is swayed by public pressure, or mired in scandal, then the most sacrosanct of American institutions becomes just another political body, like any other that can be swayed by public and private influences. At a minimum, it means the end of the American system of justice.

While we may rejoice at the victory, it must be understood that the victory isn't yet won, nor is it decisive. And it could come at a pyrrhic cost, if our judicial system is subject to pressure and in particular, corruption.

A full investigation into the leak must be conducted and the guilty, be it a clerk or a justice, must be imprisoned. Despite the apparent victory, the fight for life is not yet over. And it seems the fight for the integrity of the Supreme Court may be starting.

"Roe was egregiously wrong from the start. Its reasoning was exceptionally weak, and the decision has had damaging consequences. And far from bringing about a national settlement of the abortion issue, Roe and Casey have enflamed debate and deepened division."