What does the Constitution have to do with the Bible? A lot, actually!

A lot of people ask, "What does the Constitution have to do with the Bible?" A lot, actually. Now, Catholic Online School has a course that answers this important question. 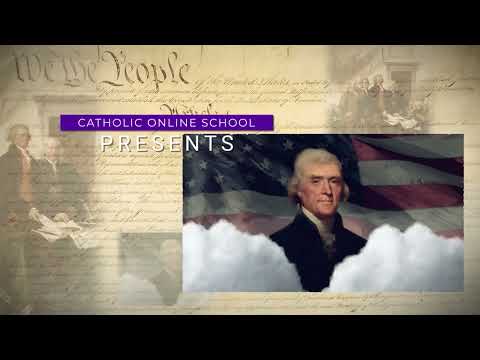 The Constitution never once mentions God or the Bible. How can they be related?

LOS ANGELES, CA (California Network) - Catholic Online School just released a brilliant new course on the Constitution. You may take the course by clicking here: The Constitution of the United States of America with 'Certificate of Completion'.

The Constitution is one of the most ingenious and influential documents ever written. Copied by governments around the world, the Constitution isn't just relevant to Americans, but to all people.

The Constitution is a short document, numbering just over 4,500 words. It can be read in just half-an-hour. Yet, few people have read it, and fewer still understand the rich significance of the carefully crafted articles and sections. Many people don't understand its importance to their lives, or how closely it is related to their history and faith.

Although the language in the Constitution is considered by some to be archaic, it is comprehensible with a little instruction. It's important to understand the Constitution because it guides and limits what the U.S. government does. A good understanding of these limits is a powerful protection against tyranny. Informed citizens understand their rights, and they can recognize when their government officials are trying to act in excess of limits on their power. it helps people to recognize corruption and evil in government.

Those who are ignorant of the Constitution are in danger of losing their freedoms.

The Constitution of the United States of America with 'Certificate of Completion' offers a Catholic perspective on this important document. Although the course is a history class, with an emphasis on explaining the articles and sections of the Constitution, everything is informed by Catholic teaching.

This brings us to our question: what does the Constitution have to do with the Bible?

It turns out, the authors of the Constitution were deeply informed by their knowledge the Bible and Christian teaching. They could not help but be influenced.

A minority of people argue the Bible and Constitution are entirely unrelated. They may even offer quotes or statements from the Founding Fathers themselves that plainly state the nation is not founded on Christian beliefs and principles. And they can point out an obvious truth, that the Constitution never once mentions "God" or the "Bible." (This ignores the other writings which contributed to its development.) It is true, the Founding fathers made a conscious effort to avoid direct association with any particular Christian denomination. But, there are certain ethics and truths that are impossible to ignore. For example, laws against murder, theft, adultery, and other misbehavior are rooted in Biblical law and Natural Law. All of civilization recognizes these laws, so it was impossible for the founders to ignore them.

The founders were certainly familiar with the Ten Commandments and with Natural Law. As a consequence, the Constitution contains limitations on government power, which compels government officials to respect these principles. For example, government agents are not permitted to confiscate property without cause or compensation. Instead, private property rights must be respected. A government agent who engages in misconduct can be punished. This includes the sin of adultery. The Constitution prevents government from interfering in religious worship. Punishments for crime must be carefully proscribed, not arbitrarily imposed. Justice is paramount.

Based on these facts, it is clear that even if the United States was not established as a "Christian Nation," and if some of the founders were deists or even atheists, it was impossible not to found the nation on Christian principles.

Of course, the people of the states and legislatures who ratified the Constitution were themselves overwhelmingly Christian. The thousands of justices who interpreted the Constitution from its ratification until now, have also been overwhelmingly Christian. As a result, their decisions have been informed by this faith, even if they themselves were unconscious of the fact.

Equipped with this understanding, we can now answer that indeed, the Bible and the Constitution are closely related.

The first lesson of the course, The Bible and the Mayflower Compact, touch on this relationship between our Judeo-Christian heritage and the Constitution. And there's a lot more to learn after this! You can take this first lesson now, and complete the course to earn your Certificate of Completion by clicking here.