Catholic school sued for being 'too woke.' What does 'woke' mean?

Anthony and Barbara Scarpo were once big donors who gave generously to Academy of the Holy Names, a Catholic secondary school in Tampa, Florida. Now, they are suing to rescind their donations and get their tuition back. The reason? the Academy has strayed too far from Catholic teaching. 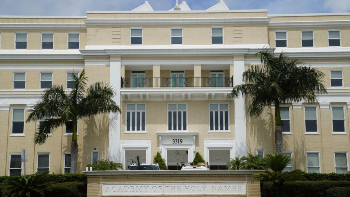 Academy of the Holy Names is facing a substantial lawsuit.

LOS ANGELES, CA (California Network) - In 2017, Anthony and Barbara Scarpo pledged $1.35 million to the Academy of Holy Names school in Tampa, Florida. The school, a Catholic college preparatory high school, was expected to use the money for tuition assistance and and its master plan. In gratitude, the school renamed their theater, the "Scarpo Family Theatre."

Now, with one child graduated and another transferred out, the family is suing for a return of their pledge and a refund of their tuition. The family alleges the school has strayed from Catholic teaching, and that it should no longer refer to itself as a Catholic school.

The lawsuit alleges the school embraced "woke culture," and gave priority to "gender-identity, human sexuality, and pregnancy termination." They also allege the school made students feel guilty for being white and having the money to attend the school.

The family and the school will have their day in court. However, the problems illustrated by the lawsuit are reflective of problems facing the Church in America, and Catholic schools across the nation.

Recently, issues of race and economics have become foremost in American political discourse. Everyday Americans have become "woke," which means they are now increasingly conscious of America's legacy of racism. Such a legacy is undeniable. The United States is a nation built on land taken from tens of millions of Indigenous people, with slaves imported from Africa doing much of the manual labor over three centuries, followed by an additional century of legal segregation. The long-term impacts of this are substantial. The promise of Critical Race Theory is that these problems can be illustrated from an academic perspective, and by making young people aware of this history, they will be better informed to address the troublesome legacy of these issues in the future.

The problem is how these facts are taught.  They are often mixed with political discourse and take on a new life of their own, becoming the pillar of new narratives that tend to be bigoted or prejudiced. Children are radicalized and some use this history to justify literal, present-day violence. Such ideas point people towards dangerous ideologies. Where the Church has been present, or even has been a historic participant, people are taught to despise the present-day Church and ignore the fact that the Church often pioneered efforts to protect and help victimized groups. And worst of all, Catholic schools, parishes, and even some priests and bishops are flirting with ideas that are blatantly contrary to the faith, and to God's law itself. Certainly, the Church cannot embrace same-sex relationships anymore than it can be expected to embrace heterosexual adultery. And the Church's schools can never teach that abortion is acceptable.

Yet, here we are.

On the other hand, there are a number of vocal Catholics who are taking the opposite stance on these issues and forgetting that while we can repudiate the sin, we must never alienate the sinner. Yes, Christianity is inherently divisive. St. Paul explained this to us plainly. Yet, the Church should not be fostering political divisions, which only subtracts and never adds to the Gospel message.

Our Churches and schools have only one purpose. That is to preach the truth. The Gospel is the Truth. Historical truths should also be taught, without excuses being made for some of the egregious errors, and outright atrocities of the past. The protection of pedophile priests is only one scandal. The terrible abuses suffered by Indigenous children is another. The Church cannot and should not avoid its responsibility in these matters.

As a nation, we should not dodge our past or our responsibility to live as One Nation, Under God with Liberty and Justice for all. That includes every single racial minority and every other person, each one lovingly and intentionally created by God.

However, teaching divisive curriculum, teaching that which is contrary to the Truth and to Church teaching does nothing to make our Church or our nation better.

As Catholics, we have only to teach the Gospel. We have no need to mire ourselves in the political zeitgeist. Teach the Gospel and the faithful will know enough to make the right decisions.

There's one Catholic school that's rising above, check it out here!