A prison ministry in South Carolina brought five inmates into the Catholic Church this winter, with the help of a dedicated team of ministers offering catechetical formation and sacrament preparation. 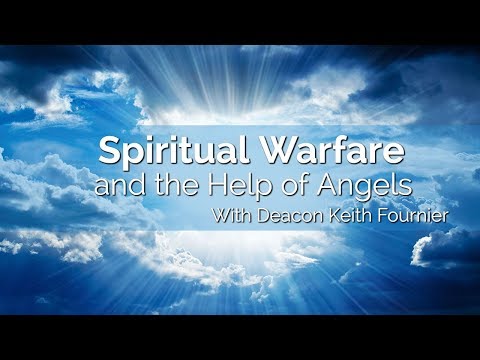 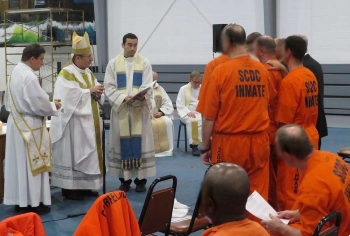 Charleston, S.C., (CNA) - A prison ministry in South Carolina brought five inmates into the Catholic Church this winter, with the help of a dedicated team of ministers offering catechetical formation and sacrament preparation.

The inmates at Perry Correctional Institution, near Pelzer, South Carolina, had been attending RCIA in the prison since last July.

Three of the men were baptized at a Dec. 10 Mass at the facility with Bishop Robert Guglielmone of Charleston, while two others had already been baptized in Protestant denominations and were brought into full communion with the Catholic Church.

Also at the Mass were Deacon John Leininger, the outside coordinator for and Father Rhett Williams, who handles the sacramental responsibilities at Perry.

He emphasized the importance of the prison's catechetical classes, which were able "to put a little flesh on the bones of what the faith is and what [is] God's grace and how it is that he works."

Inmates were allowed to invite family members and fellow prisoners to the Mass. The Catholic Miscellany, the diocesan newspaper, said those receiving the sacraments were deeply touched by the support they received.

"So many loving, caring people attended to watch me being welcomed into the Church. I truly felt the spirit of God throughout the Mass," said Timmy, one of the inmates receiving confirmation.

"[Confirmation was] the most important day of my adult life. The understanding of the role Christ plays in my life has taken new shape. I have come to love the Catholic faith, and the more I learn, the better my life becomes," said James, another inmate.

Fr. Williams attributed this year's success largely to the team assembled by Deacon Leininger, who has been involved with the prison for the last four and half years. He said the deacon and his team have developed a consistent ministry, where the inmates can rely on the volunteers and the presence of the Church.

Leininger also stressed the importance of consistent volunteers and commitments made by the ministry.

"Now, we're up to about six volunteers. So generally there's almost always two volunteers...And so even if somebody doesn't make it [as] planned, you still have somebody showing up. So consistency, the men know it's going to be there and... they feel welcomed," he told CNA.

He added that the ministry tries to avoid placing an undue focus on sin and repentance. "I've been there when other churches have come in and they're preaching out in that way, and we're just trying to live with them and talk about God's word," he said.

Leininger first began his work in prison ministry at a county jail more than 10 years ago. He worked there for six years, but the inmates there had sentences of no longer than a year, and he wanted a ministry where he could develop stronger relationships over time.

During the last couple of years, he has become more serious about prison ministry, retiring from his teaching job at Clemson University and entering the diaconate. Now, he leads the prison ministry for Perry, managing the schedules for priests and volunteers, and coordinating activities.

The  ministry is divided into two weekly commitments - Thursday Mass and Friday catechesis. Mass is celebrated by alternating priests: Father McClellan from St Andrew in Clemson, Father Dwight Longenecker from Our Lady of the Rosary in Greenville, Father Patrick Tuttle from St. Anthony of Padua in Greenville, and Father Williams, who is also the parochial vicar at St. Mary Magdalene in Simpsonville.

A specially selected inmate known as an "inside coordinator" sets up the altar, passes out rosaries or Bibles if requested, and obtains permission slips for men to exit their cells for the service. The attendance for Mass can range between 8 and 18 men.

"We have a number of people that come to Mass on Thursday that aren't Catholic either," said Leininger. "They'll come in just like in a regular church, cross their arms, and get a blessing. Now that was happening last year, and then we asked some of these men if they want to get brought into the church. Then we started a formal catechism with them."

The weekly catechetical classes are two hours long. Similar to RCIA, they study a variety of theological topics and sometimes watch Christian movies on the lives of saints. Among other lessons, Leininger said the class reviews the Eucharist and the history of the Church, including discussions on the Church councils and major heresies.

The class is also centered on prayer, he said. At a recent session, Leininger printed out worksheets for a novena and initiated a nine-day series of prayers for the sanctity of life.

Catechesis in prisons does pose its own set of obstacles, he noted, and it often takes longer than other RCIA programs. He said there are times when the prisons are on lockdown and outside religious groups cannot enter or prisoners get sent back to their cells early before the meeting has finished.

There are also inmates who transfer from another prison during the catechesis process but have to start all over because RCIA can differ depending on the institution. He said this will be a point of discussion at an upcoming meeting of prison volunteers. The hope is to unify the process enough that someone who transfers will not have to restart the program.

Leininger said prison ministry has been a powerful experience for him, witnessing the joy and life this ministry brings to inmates. He recalled one instance when a prison lockdown resulted in him and the inside coordinator being the only people present at a catechetical class.

After talking for about an hour, the inmate - who was serving a life sentence - told him, "The two hours I get to spend with the Catholic Church each week are when I feel more at home than any other time of the week."

"That one statement keeps me going - when I take an hour drive to get there, and then they won't let me in, but I'll still come back the next week," he said. "If I don't get in, I know they're missing it more than I am and it keeps me going every week."

Fr. Williams stressed that while the inmates in prison may have made mistakes in their lives, their circumstances do not detract from their value - or their need for the sacraments as "spiritual food for the journey."

"There's nothing greater that we can give than our love and attention [and] God's grace working through us to help them see themselves for who they are and where they need to go. We're all sinners and need to draw closer to God," he said.