Baltimore, Md., (CNA) - The new vice president of the U.S. bishops' conference says that he wants to help bring a spirit of evangelism to the conference as organized religion continues to decline in the U.S. 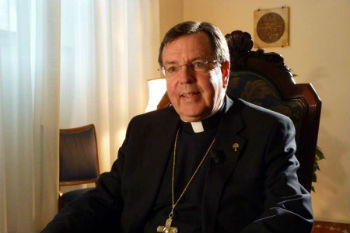 Baltimore, Md., (CNA) - The new vice president of the U.S. bishops' conference says that he wants to help bring a spirit of evangelism to the conference as organized religion continues to decline in the U.S.

"We need to become an evangelizing Church where the faith is passed from person to person more directly," Archbishop Allen Vigneron of Detroit, told CNA on Tuesday on the sidelines of the bishops' annual fall meeting in Baltimore, Maryland.

Vigneron has served as archbishop in Detroit since January of 2009, when he was appointed by Pope Benedict XVI. Prior to that, he was first coadjutor and then bishop of Oakland, California since 2003, and was previously rector-president of Sacred Heart Major Seminary in Detroit from 1994 until 2003.

The archbishop told CNA that there must be an "urgency" of evangelization in the U.S. at a time when the percentage of Americans identifying as Christian continues to decline.

A report by Pew Research last month revealed that the percentage of Americans identifying as Christian fell by double digits since 2009, and that Catholics no longer make up a majority among Hispanics in the U.S.

Evangelization is the answer to this, Vigneron said, pointing to a 2016 archdiocesan synod he convened with lay faithful, priests, and religious in Detroit. The synod led to his pastoral letter, issued the following year, "Unleash the Gospel." In that letter, Vigneron established ten "guideposts" for evangelization and warned against certain "capital vices" in the local church.

"It galvanized the diocese from bottom to top," Vigneron said of the synod, telling CNA that evangelization cannot just be one among many priorities for the Church, but that it is "the form that's supposed to inform everything."

"It was of inestimable worth for us to have a synod," Vigneron said, pointing to a time of  "epic change" in Church in the U.S., with a shift away from institutions that were once powerhouses of evangelization - schools and charities - but are no longer.

Evangelization, he said, "involves everybody learning some way, or thinking about, how today am I going to meet people that I can bring to Christ? And everybody can do that."

Following his election as USCCB vice president, Vigneron also spoke with CNA about the church's response to the clergy sex abuse crisis, including an update given to the bishops on the Vatican's much-anticipated report on Theodore McCarrick. Cardinal Sean O'Malley of Boston told the conference on Tuesday that the report had been prepared and was awaiting papal approval before publication either before Christmas or early in the New Year.

Vigneron told CNA he was early awaiting the report's release, and that it was a necessary step in healing the breach of trust between bishops and the faithful in the United States.

"I think it will be good for us to understand how this evil behavior was allowed to continue in the life of someone who - in whom so much pastoral trust was placed so that we can start on a path so that we don't do it again," he said.

As part of the related abuse scandals to hit the Church in the last 18 months, many dioceses are facing investigations by states' attorneys general into clergy sex abuse. The Pennsylvania grand jury report, released in 2018, revealed more than a thousand allegations of abuse over the span of several decades, and more than a dozen other states - including Vigneron's own state of Michigan - have open investigations.

Michigan Attorney General Dana Nessel launched his investigation into clergy sex abuse in all seven Catholic dioceses in the state last year. In May, Nessel's office announced charges of 21 counts of criminal sexual conduct against five priests in the ongoing investigation.

Vigneron told CNA that he was committed to working with civil authorities to address historic injustices, but that he and other bishops did not know when the investigation might conclude.

"I don't know where the work of the Attorney General in our seven dioceses stands right now," Vigneron told CNA but said he and the Archdiocese of Detroit were being "very cooperative" with state officials.

Vigneron told CNA that although the McCarrick scandal had been painful for the Church in the United States, many past victims of abuse had now come forward, and that is an important part of serving justice and healing in the Church.

"I can account for some of this matter by saying that the investigations that became very prominent led some people to come forward and speak up, and - when in the past they didn't do that," he said.

In past decades, abuse victims were asked by some dioceses to sign confidentiality agreements as part of settlements with Church authorities, something now specifically prohibited by Pope Francis. Vigneron said that it was important that no victim felt intimidated into silence.

"I think the time for confidential agreements is gone," he said.

Vigneron's three-year term as USCCB vice president formally began on Wednesday, at the conclusion of the conference's Fall Assembly in Baltimore.