Adhering to Church teaching is a priority for Catholic Relief Services (CRS), and policies are in place to ensure it is not complicit in immoral activities as it partners with groups that do not hold Catholic beliefs, said the bishop who heads the agency's board. 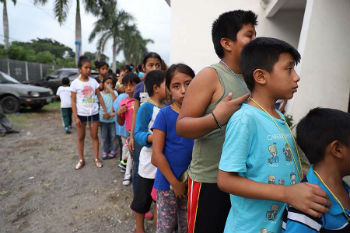 Scenes from shelters in Escuintla Guatemala after the Fuego volcano erupted

Baltimore, Md., (CNA) - Adhering to Church teaching is a priority for Catholic Relief Services (CRS), and policies are in place to ensure it is not complicit in immoral activities as it partners with groups that do not hold Catholic beliefs, said the bishop who heads the agency's board.

"Our efforts overseas are seen as among the finest examples of a morally-based Catholic agency," said Bishop Gregory Mansour, chairman of the board of directors for Catholic Relief Services.

"Nonetheless, we are seen as a bit strange by some international agencies that serve the poor, because we believe that serving the poor is just that - not eliminating the poor by abortion or contraception, but by truly serving them in all their human dignity."

The bishop stressed that CRS prioritizes Catholic teaching, to the point that the agency stands out internationally for its insistence on carefully crafting grant language to ensure that it is not participating in immoral programming. The agency will not get involved in grants that require it to compromise on Catholic doctrine, he said.

CRS was founded in 1943 and is the official international humanitarian agency of the Catholic community in the United States.

Mansour, who heads the Eparchy of Saint Maron of Brooklyn, offered an update on the work of CRS to the U.S. bishops at their fall general assembly in Baltimore this week.

As part of that presentation, the bishop stressed the importance of Catholic identity in CRS' work.

"We're Catholic to the core, training our 6,700 employees throughout the world - whether they're Catholic or not - on all the tenets of Catholic social teaching," he said. He pointed to the agency's zero tolerance policy and whistleblower program.

"The grants we apply for at CRS to serve - whether from large donors, from the U.S. government, the Global Fund - are vetted to be sure that we do not agree to do anything against Catholic teaching as we serve the poorest of the poor, and we have that same fidelity to all of those people who give either in a second collection for CRS or Operation Rice Bowl," he added.

Following the presentation, Archbishop Joseph Naumann of Kansas City, Kansas, thanked Mansour, as well as CRS President and CEO Sean Callahan, for safeguarding the integrity of the agency and listening respectfully to those who have had concerns.

"Thank you for all that you've done to protect the Catholicity of all that we're doing, and I just applaud your great work," he said.

Mansour replied that both the CRS staff and board of directors are "very conscious" of Catholic identity.

"And so we've been listening to anybody who has any criticism, trying to see if there's some validity to it, and if there is, we deal with it. If there's not, we tell them, 'Please. We've vetted this, we've looked at it. And we're at peace with it'," he said.

However, the agency suggested that the allegations mistook the actions of CRS staffers with those of non-staff community health workers, who are locally chosen on the ground of the countries where they work. CRS was training Madagascar community health workers in areas such as children's health, nutrition, and malaria prevention, and these health workers may also have been involved in contraceptive distribution programs, but they were not affiliated with CRS in doing so, the organization said.

In 2016, the agency was accused of being complicit in a contraceptive distribution program in the Democratic Republic of the Congo. CRS responded that while the language in the grant report was unclear, the agency had actually been working to promote Natural Family Planning in accordance with Catholic teaching. It said the report was written by an outside group that may not have understood the difference between Natural Family Planning and artificial contraception.

Catholic Relief Services has repeatedly said that it follows Catholic teaching and does not provide or facilitate access to contraception.

When CRS partners with groups that disagree with Catholic doctrine, the extent of their work together is limited to efforts that align with Church teaching, such as work to prevent malaria, promote childhood nutrition, or offer clean drinking water, the agency says. Both bishops and moral theologians review programming to ensure that it complies with Church teaching.

At a press conference following the presentation, CNA asked Mansour if he could elaborate on efforts to ensure the Catholic identity of programs in which CRS participates.

"To be honest, we are the only group that won't do contraception, that won't do referrals for abortions. And we make that quite clear when we write grants," Mansour replied.

However, he said, international grant funding is often given to joint projects with multiple partners. When CRS works with partners - including other Christian groups - that do not abide by Church teaching, the agency tries to avoid scandal and make it clear that they are only participating in work that is morally acceptable.

"And all of those the grants are vetted by moral theologians and bishops on the board, as well as laity who have a strong sense of Catholic identity," he added.

In addition, Mansour said, "when we get a complaint, we investigate it on the ground. We go to the place and we investigate with everybody. We do our best to do that."

The agency works with more than 1,000 different partners globally, so these investigations can be a lot of work, the bishop acknowledged.

However, he added, "I'm not afraid of doing it. I myself as chair, any time anybody had a criticism, I dealt with it personally."

CRS has a team in place to look at concerns raised, he said. "So I think if there are still complaints out there, our ears are open to listening."