Arizona's Catholic bishops issued a statement Thursday in support of a change in policy that will offer a discounted college tuition rate to resident high school students who are undocumented immigrants. 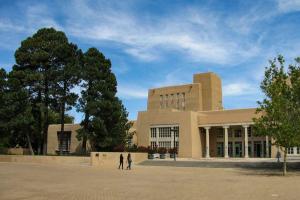 Albuquerque, N.M., (CNA) - "We are glad that these undocumented students, who were brought here through no fault of their own, will now have more opportunities to better their lives after they graduate from our high schools and eventually become productive members of our society," said the statement, which was co-signed by the state's four bishops.

"Today's action allows these students, as well as other Arizona high school graduates who have left the state, to join immigrant students who are in the DACA program and pay a much lower tuition rate that reflects the actual costs at our public universities," the bishops said.

Several states offer in-state tuition to undocumented students who graduated from a high school in the state.

The announcement came on the same day that Bishop Joe Vasquez of Austin, who chairs the United States Conference of Catholic Bishops' Committee on Migration, issued a statement condemning a newly-published Department of Health and Human Services and Department of Homeland Security rule that concerns the care and custody of immigrant children.

That new rule allows for families, including minors, to be detained for longer than the previous 20-day limit allowed under the Flores settlement.

Vasquez said the rule is "unlawful and inhumane" and will harm "countless children."

"This rule will have heartbreaking consequences for immigrant children " those whom Pope Francis has deemed 'the most vulnerable group' among migrants," said VĂˇsquez in the statement, which was published on the USCCB's website.

"It is an attempt by the Trump Administration to circumvent existing obligations and undermine critical protections for these children. This rule will jeopardize the well-being and humane treatment of immigrant children in federal custody and will result in children suffering long-lasting consequences of being held for prolonged periods in family detention."

The new rule will take effect 60 days after its publication.