The Diocese of Scranton has begun an investigation into allegations of misconduct on the part of the rector of the Basilica of the National Shrine of the Immaculate Conception in Washington, D.C. 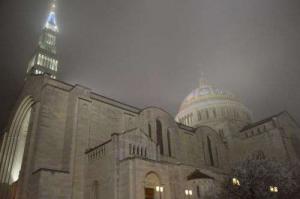 Washington D.C., (CNA) - "Bishop Joseph Bambera, Bishop of the Diocese of Scranton, has commenced the process of launching a full forensic investigation into the concerns that have been raised," about Msgr. Walter Rossi, the diocese told CNA Aug. 14.

"Approximately one year ago, concerns were raised in the public sector regarding Monsignor Walter Rossi, a priest who was incardinated in the Diocese of Scranton but who has served more than 20 years at the Basilica of the National Shrine of the Immaculate Conception in Washington, D.C."

"The Diocese of Scranton referred those initial concerns to the Archdiocese of Washington, which investigated certain specific allegations and determined them to be unfounded," the diocese added.

"Additional concerns have now surfaced, however, requiring a broadened investigation."

"Bishop Bambera has spoken with Archbishop Wilton Gregory and they have agreed that the Diocese of Scranton and Archdiocese of Washington will work jointly and cooperatively on undertaking a comprehensive investigation," the statement concluded.

Concerns were raised about Rossi to Archbishop Gregory Tuesday night, during a question-and-answer session at a Theology on Tap, held at the Public Bar Live in the Dupont area of Washington. The event was broadcast live on Facebook.

During that session, Gregory called for an independent, forensic investigation of some allegations against Rossi.

In the first question from the floor at the Aug. 13 event, Gregory was asked about Rossi, who has been the subject of media reports and public speculation in the last year.

"My question calls for accountability, which in the past you have committed to," a young man asked, before bringing up recent media reports alleging abuse or the cover-up of abuse on the part of Rossi.

"I am not claiming that these allegations have been technically proven," the questioner said, "but I am wondering why in that sort of situation he hasn't been removed from active ministry until an investigation can be completed?"

Gregory responded "In our society, people can be 'proven guilty' by innuendo or by common conversation."

"As far as I know, no one who has been a victim [of Rossi] has come forward and identified themselves and said specifically 'I was harmed.'"

A follow-up question noted that Rossi has been accused of directing young men to Fr. Matthew Reidlinger, a priest friend of Rossi's who is alleged to have sexually harassed them in phone calls and text messages. That accusation was made in 2013.

Gregory was then asked why Rossi remained in ministry at the Washington shrine; as the local archbishop, Gregory is the chairman of the board of trustees.
"It seems to me that the investigation has to come from his bishop, he's a priest of Scranton."

Acknowledging that Rossi is assigned to a Washington church, Gregory said that "the investigation has to begin with his bishop, that's just how things are done."

"Until that kind of investigation is done, a forensic one [with] outside investigators, I don't know how we can make a decision [on the suitability of Rossi to continue in ministry in Washington] until those kinds of investigations are completed."

The announcement from the Diocese of Scranton came in response to questions from CNA about whether Bambera would initiate the kind of investigation called for by Gregory.

The Archdiocese of Washington did not return CNA's calls for comment.

Attempts were also made to contact Rossi through the communications office at the Basilica of the National Shrine of the Immaculate Conception. A spokesperson for the shrine directed all inquiries to the Diocese of Scranton.
Beyond the allegations mentioned at the Aug. 13 Theology on Tap, additional accusations have also been leveled against Rossi.

In an interview in June, former papal nuncio Archbishop Carlo Maria Vigano alleged that the nunciature in Washington had received "documentation that states that Msgr. Rossi had sexually molested male students at the Catholic University of America."

Vigano also said that both the Vatican Secretary of State, Cardinal Pietro Parolin, and former Washington archbishop Cardinal Donald Wuerl were both "well aware of the situation," and that Rossi had previously been proposed for promotion to bishop and been blocked.

When he began his remarks, Gregory told the crowd of 350 young adults that he understood and shared the disaffection of local Catholics with the Church hierarchy in the wake of recent scandals which had left him "embarrassed."

"I know that this past year has been an extraordinarily painful year for Washington because of the revelation of behavior of two former archbishops."

"Theodore McCarrick, there are no words to explain the awful events that visited this local Church because of his behavior. And also Cardinal Wuerl, who while he was Bishop of Pittsburgh did many good things, but obviously there were things that he didn't do that I suspect now he is regretful of."

"I know Wuerl's regretful, but they too add to the sorrow that we experienced, and the embarrassment," Gregory said.

"There are no easy answers or simple solutions. All I can do as archbishop is to try to the best of my ability some sense of trust."

Earlier in the evening, Gregory introduced himself to the crowd by noting that he preferred to be up front in his dealings: "Disclosure is always better than discovery," he said.

Responding to a series of questions throughout the evening on the subject of the abuse crisis, Gregory praised the courage and witness of abuse survivors, pledging to stand with and behind them with "whatever resources we have."

The Diocese of Scranton has not indicated a timeline for its investigation of Rossi, or stated whether the priest's ministry will be limited while an investigation is underway.

This post has been updated following a clarification from the Archdiocese of Washinton Young Adult Ministry Team. It originally gave the estimated attendence at the Theology on Tap event as 200.