At fertility clinics, abandoned human embryos could number in the millions

The number of "abandoned" human embryos in the United States could number in the millions, and many fertility specialists are reticent to discuss the dilemma of what to do with frozen embryos, according to a recent NBC News report. 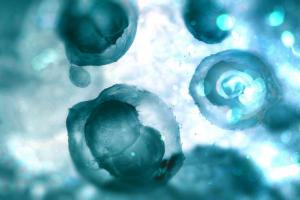 Denver, Colo., (CNA) - According to Christine Allen, a fertility doctor who runs a consultant business called Elite IVF, most fertility clinics fertilize far more eggs than they plan to use when performing in vitro fertilization, leading to the practice of indefinitely freezing surplus embryos- far more even than the process of IVF, which has a high failure rate, attempts to implant into a woman's uterus.

"You see [some women] having 40, 50 or 60 eggs retrieved in a cycle and the embryologist gets the orders from her doctor to inseminate all of them - and the question isn't asked if the patient even wants that many inseminated. Nobody's going to have 30 kids," Allen told NBC News.

Several fertility doctors told NBC News that many clinics consider embryos abandoned after patients stop paying storage fees and fail to respond to the clinic's attempts to contact them.

Approximately one-third of all the frozen embryos at a fertility clinic in Fort Myers have been discarded or abandoned, NBC News reported. Storage fees for frozen embryos typically run from $500 to $1,000 a year depending on the clinic.

Neither the Centers for Disease Control and Prevention nor the Society for Assisted Reproductive Technology require fertility clinics to report how many embryos have been abandoned at their clinics, NBC News says.

Though the embryos themselves take up very little space, the nitrogen tanks used to store them do. With modern techniques, frozen embryos could last as long as 100 years, doctors say.

Father Tad Pacholczyk, Director of Education at the National Catholic Bioethics Center, told NBC News that couples who have previously IVF undergone should consider setting up trust funds for their embryos in order to ensure that the storage fees will be paid indefinitely.

Pacholczyk has said in the past that for embryos already created and frozen, no other obvious moral options seem to exist other than keeping them that way.

"Creating a trust fund for the frozen embryo shows a couple is taking responsibility for what they created," Pacholczyk told NBC News.

"To me, the complexity of the situation about what to do with these excess embryos is a powerful reminder that when you cross moral lines, there's a price to be paid."

Although organizations have been set up to collect abandoned embryos for research purposes, Pacholczyk told CNA earlier this month that any research done with stem cells- even for commendable purposes, such as efforts to cure diseases- cannot involve the destruction of embryos, or the creation of embryos specifically for research.

[R]esearchers must use induced pluripotent stem cells, or other types of stem cells such as adult stem cells, rather than embryonic stem cells that have been destructively procured from human embryos," he explained.

Moreover, embryos whose parents do not sign the necessary paperwork to allow the embryos to be used for research remain "stuck."

The Catholic Church stresses that all human persons - including those in the embryonic state - have an invaluable human dignity.

In 1998, the U.S. bishops' conference published a document explaining that "the Church has clearly and unequivocally judged [IVF] to be immoral."
In the 2008 instruction Dignitatis personae, the Congregation for the Doctrine of the Faith noted that the typical uses for already frozen embryos- the treatment of diseases, treatment for infertility, and even "prenatal adoption"- all present ethical challenges and leave the embryos "susceptible to further offense and manipulation."

"The practice of multiple embryo transfer implies a purely utilitarian treatment of embryos," the congregation wrote.

"One is struck by the fact that, in any other area of medicine, ordinary professional ethics and the healthcare authorities themselves would never allow a medical procedure which involved such a high number of failures and fatalities...The desire for a child cannot justify the "production" of offspring, just as the desire not to have a child cannot justify the abandonment or destruction of a child once he or she has been conceived."

The Congregation also quoted a 1996 address by Pope St. John Paul II in which he made an "appeal to the conscience of the world's scientific authorities and in particular to doctors, that the production of human embryos be halted, taking into account that there seems to be no morally licit solution regarding the human destiny of the thousands and thousands of 'frozen' embryos which are and remain the subjects of essential rights and should therefore be protected by law as human persons."

Pope Francis has said that there is no outcome that can justify the use or destruction of embryos for scientific purposes - including research aimed at curing diseases.

"Some branches of research, in fact, utilize human embryos, inevitably causing their destruction. But we know that no ends, even noble in themselves, such as a predicted utility for science, for other human beings or for society, can justify the destruction of human embryos," he said during his general audience May 18.