Bishop Michael J. Bransfield, Bishop emeritus of Wheeling-Charleston, will no longer be allowed to participate in public Masses or live within his former diocese. He must "make personal amends" for the harm he brought to the diocese, Pope Francis announced in a communique released on Friday afternoon. 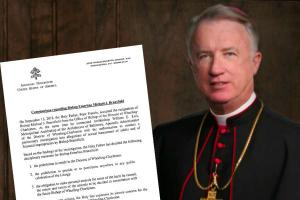 Wheeling, W.V., (CNA) - Bransfield is reported to have sexually harassed, assaulted, and coerced seminarians, priests, and other adults during his time as Bishop of Wheeling-Charleston. He was also found to have given large cash gifts to high-ranking Church leaders, using diocesan funds.

The July 19 Vatican communique, which was published Friday on the Diocese of Wheeling-Charleston's website, was sent from the Apostolic Nuncio of the United States, Archbishop Christophe Pierre.

Bransfield's resignation was accepted by Pope Francis on Sept. 13, 2018, five days after Bransfield reached the retirement age of 75.

When Pope Francis accepted Bransfield's resignation, he appointed Archbishop William E. Lori of Baltimore as the apostolic administrator of the diocese. He also authorized Lori to start an investigation into the allegations made against the retired bishop, which at the time were described as financial abuses and the sexual harassment of adults.

A hotline for the investigation that was set up in September received more than three dozen calls during its first two weeks.In March, Lori announced that he had restricted Bransfield's ministry in the Diocese of Wheeling-Charleston as well as in the Archdiocese of Baltimore, and that the Holy See would be conducting an additional evaluation of the investigation. That assessment was released on Friday.

The Holy See's communique expands that restriction, and adds the additional prohibition on living within the diocese. Further, the Vatican wrote that Bransfield has "the obligation to make personal amends for some of the harm he caused."

Per the release, "the nature and extent of the amends to be decided in consultation with the future Bishop of Wheeling-Charleston."

After the investigation, Archbishop Lori confirmed that investigators had established a pattern of sexual malfeasance, and serious financial misconduct by Bransfield throughout his time as bishop.

"The investigative report determined that during his tenure as Bishop of Wheeling-Charleston, Bishop Bransfield engaged in a pattern of excessive and inappropriate spending," Lori said, citing renovations to multiple residences and the misuse of Church funds "for personal benefit on such things as personal travel, dining, liquor, gifts and luxury items."

Some bishops who received cash gifts from Bransfield pledged to return them.