A Church historian at Philadelphia's Villanova University has said three U.S. bishops are "devout schismatics" who try to diminish the authority of Pope Francis. 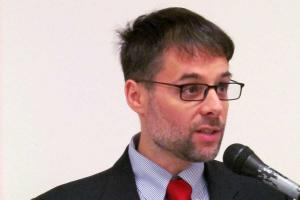 Denver, Colo., (CNA) - "They are devout in the sense that they publicly display their preference for a traditionalist Church and its devotions, such as the rosary. They are schismatics because they openly promote the undermining of the bishop of Rome among the Catholic faithful," Massimo Faggioli wrote in a July 16 essay for La Croix magazine.

The historian said the "schismatic instincts" of those bishops were manifested in August 2018, when they "sided with Archbishop Carlo Maria Vigano, the former papal nuncio to Washington who called on Francis to resign."

Vigano released on Aug. 25, 2018 a "testimony," which, among other things, accused Pope Francis of ignoring warnings about former cardinal Theodore McCarrick's sexual deviancy, and then raising McCarrick's status within the Vatican.

After the testimony was released, Strickland issued a statement calling Vigano's allegations "credible," and Cordileone said he could confirm that some of Vigano's statements were true.

Contrary to Faggioli's claim, however, Chaput did not endorse Vigano's allegations. A spokesman told reporters in August that Chaput "enjoyed working with Archbishop Vigano during his tenure as Apostolic Nuncio," adding that Chaput found Vigano's time at the nunciature "to be marked by integrity to the Church."

However, the spokesman said that Chaput could not comment "on Archbishop Vigano's recent testimonial as it is beyond his personal experience."

In July 19 comments to CNA, Faggioli said that he "did not state that the Archbishop called on Francis to resign or that he created a schism, only that he vouched for Vigano's integrity. That seems like siding with Archbishop Vigano especially in the context of his continued silence about Vigano's request for the resignation of the pope."

Faggioli added that "Vigano put pressure on the pope to resign. One would expect a bishop - and especially an archbishop metropolitan who has twice received the pallium, a sign of special unity with Christ and of communion with the Successor of Peter - to defend the pope's integrity and to say that no one has the right to ask the pope to resign."

Shortly after Pope Francis was elected in 2013, Chaput told radio personality Hugh Hewitt that the election had made him "extraordinarily happy, because quite honestly, he is the man I was hoping would be Pope eight years ago."

Two years later, Chaput hosted Pope Francis in Philadelphia for the 2015 World Meeting of Families. Reflecting in 2018 on that meeting, Chaput wrote that the pope's "time with us was filled with powerful public moments and deeply grace filled intimate gatherings hallmarked by an overarching spirit of mercy, compassion, and charity."

"[Pope Francis] has repeatedly challenged us to bear witness to Christ through concrete action "by serving the poor, by helping immigrants, by preserving families, and by protecting the sanctity of life. It's the kind of challenge we can and should answer with a hearty yes each day," Chaput added.

In his essay criticizing "devout schismatics," Faggioli wrote that "dissent against this pope has become radicalized with schismatic instincts because this kind of political devotion is more about a partisan ideology than about the Church. Catholicism was exposed to ideological manipulation by those who do not really care for the Gospel, but who are more interested in a particular conservative political culture."

Chaput, among those identified as a "devout schismatic," has frequently emphasized his unwillingness to align with a political party, and criticized partisanship within the Church.

In 2016 he criticized Catholics, especially politicians, who accept "the transfer of our real loyalties and convictions from the old Church of our baptism to the new 'Church' of our ambitions and appetites,' in order to achieve political or personal goals. he group of those who do so "cuts across...both major political parties," Chaput said.

The Church's canon law defines schism, the charge Faggioli makes against the three bishops, as "the refusal of submission to the Supreme Pontiff or of communion with the members of the Church subject to him."

Ed. note: This story was updated July 19 to include comments e-mailed to CNA by Faggioli.