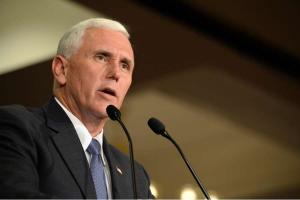 Washington D.C., (CNA) - "We're gathered here, 106 nations strong, because we believe in the freedom of conscienceâ€"the right of all people to live out their lives according to their deeply held religious beliefs," Vice President Pence told religious and civic leaders from around the world at the Second Annual Ministerial to Advance Religious Freedom in Washington, D.C.

The Ministerial was hosted by the U.S. State Department from July 15-19. Religious and civic leaders from all over the world, as well as over 100 foreign delegations, gathered to bring attention to global religious persecution and discuss strategies to promote and defend religious freedom.

Survivors of religious persecution were present and shared their stories; these victims have endured prison sentences, mob violence and state-sanctioned terror," Pence stated on Thursday, the last day of the Ministerial. For some others, they have been killed for their beliefs, he said.

Pence noted that "on a personal level, my faith in Jesus Christ has brought meaning and purpose to me and my family every day of my life."

The Vice President was baptized Catholic, but said has said that while in college, his faith became "real" when he "made a personal decision for Christ"; in a 1994 interview he identified as an "Evangelical-Catholic," began attending an Evangelical megachurch with his family and calls himself a "Christian."

Also on Thursday morning, Secretary of State Mike Pompeo delivered his keynote remarks at the Ministerial. He stated that "religious freedom isn't just a Christian concern, a Jewish concern, a Muslim concern, a Buddhist concern, a Hindu concern, or a humanist concern. It's all of our concern; it is everyone's concern."

In their remarks, Pompeo and Pence mentioned persecution of religious minorities in the Western Hemisphere in Cuba, Nicaragua, and Venezuela, as well as anti-Semitism in Europe, genocide against Christians and Yezidis in Iraq and Syria, and the persecution of religious minorities in Iran, China, and North Korea, as well as the "ethnic cleansing" against Rohingya Muslims in Burma.

"In Nicaragua," Pence said, the regime "condones thugs who repress and intimidate Catholic Church leaders for defending democracy and religious freedom." Meanwhile, in Venezuela, "dictator Nicolas Maduro is using so-called â€~anti-hate' laws to prosecute Catholic clergy who speak out against his brutal regime," he added.

Pence drew attention to the mass detention of more than one million Chinese Muslims and ethnic Uighurs in the Xinjiang province of China; they have endured brainwashing by Chinese authorities in what survivors have described as "a deliberate attempt by Beijing to strangle Uighur culture and stamp out the Muslim faith," Pence said.

The Chinese Communist Party has targeted Uighur Muslims as well as Christians, Tibetan Buddhists and Falun Gong practitioners in its brutal campaign of "sinicizaition" to forcibly bring religion under its control, Rep. Chris Smith (R-NJ) stated in his remarks at the Ministerial on Wednesday.

"Under sinicization, all religions and believers must comport with and aggressively promote communist ideologyâ€"or else," Smith said. The government has harassed, surveilled, detained and tortured believers, burning Bibles and crosses, destroying churches, and rewriting Bibles and religious texts, he said.

"Muslim-majority countries must protest these abuses even at the risk of endangering the benefits from China's Belt and Road infrastructure projects," Smith said.

Pence reaffirmed U.S. support for "people of faith in China" regardless of the outcome of U.S.-China trade negotiations. He also stated the administration's support for religious freedom in North Korea while talks continue on the country's denuclearization.

"If you're here today and you're a country which has defied the Chinese pressure to come here, we salute you and we thank you," Pompeo said.

The Secretary of State urged those in attendance to attend regional roundtables and conferences on religious freedom to be held in Albania, Columbia, Morocco, and the Vatican.

August 22 will be the International Day Commemorating the Victims of Acts of Violence Based on Religion or Belief, as proclaimed by the UN General Assembly and "thanks to Poland's efforts," Pompeo said.

Both Secretary Pompeo and Vice President Pence announced funding for victims of religious persecution and actions the U.S. has taken to punish human rights abusers.

This week, the U.S. sanctioned four military officials in Burma, including two high-ranking leaders, and also placed additional sanctions on two leaders of Iranian-backed militias in the Popular Mobilization Forces (PMF) in Iraq, Pence said. Iranian-backed militias are harassing Christians in the Ninewa Plain as they return home from the ISIS genocide, and have posed some of the greatest security threats in the region to Christian minorities.

Meanwhile, the State Department "trained nearly 12,000 employees on how to identify religious discrimination and persecution and how to work closely with faith leaders all across the world," Pompeo said. a 2016 law authored by Rep. Smith, the Frank R. Wolf International Religious Freedom Act, required training on international religious freedom for all foreign service officers.

In addition, the agency established an International Religious Freedom Fund for victims of persecution; the fund has helped with the medical bills of some of the survivors of the Easter Sunday bombings in Sri Lanka, which targeted churches and hotels on the holiest weekend of the year for Christians, Pompeo said.

In addition, over $340 million in U.S. assistance has supported "vulnerable religious and ethnic communities in Iraq, particularly those that ISIS had targeted for genocide," he said.