The Catholic Diocese of Pittsburgh is evaluating options to respond to severe financial strains, exacerbated in the last year by the sex abuse crisis, a diocesan official said Wednesday. 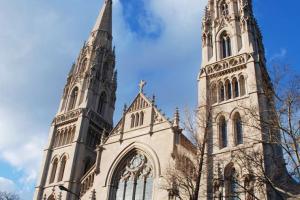 Pittsburgh, Pa., (CNA) - "The challenges that we're facing are similar to that of many other churches, I think, throughout the country," said Msgr. Ronald Lengwin, Vicar for Church Relations for the diocese.

He told CNA that already-existing financial struggles had been greatly compounded by the sex abuse crisis that broke last summer.

In August 2018, a Pennsylvania grand jury report was released, identifying more than 1,000 allegations of abuse at the hands of some 300 clergy members in six dioceses in the state, including 99 from Pittsburgh. It also found a pattern of efforts by Church authorities to ignore, obscure, or cover up allegations " either to protect accused priests or to spare the Church scandal.

Since that report was released, Mass attendance has dropped 9% and offertory donations have declined 11%, CBS Pittsburgh reported.

Lengwin told CNA that the decline in Mass attendance and collection money had been going on before the sex abuse scandal was unveiled. Ten years ago, he said, some 187,000 people attended Mass in the diocese each Sunday. By 2018, that number had dropped to about 120,000 ďż˝" a decline of more than 30%.

The abuse scandal has intensified problems that were already present for the local Church, including parishes that had been borrowing from the diocese to pay insurance premiums, creating an unstable financial situation.

When the diocese set up a survivors' compensation program to aid the healing of abuse victims, it expected to receive about 250 claims, based on the number of allegations that had already been received, and estimates constructed from talking to other dioceses.

"But now we're looking at 350-400 claims," Lengwin said. "We don't know what that final number will be, but we have reason to believe it will be significant."

The decline in offertory money, combined with the unexpectedly high number of victims' compensation filings, means that the diocese could be millions of dollars short in addressing survivors' claims and other diocesan expenses.

With limited resources, Catholic leaders are looking for solutions. Thirty-two employee positions have been eliminated. Bishop David Zubik has emphasized that responding to abuse victims remains a top priority.

"We're trying to identify additional money that exists," Lengwin said. The diocese has sold most of its parcels of property already, and a small building that previously served as a headquarters for the local Catholic newspaper is expected to be sold soon.

In addition, a court hearing will be held in coming weeks, as the diocese seeks permission to use money from an already-established foundation to fund payments of abuse claims.

The Diocese of Pittsburgh is working toward consolidating and merging a number of parishes, a process that was already underway before last summer.

CBS Pittsburgh reported that Bishop Zubik has also warned that "more than a few" diocesan schools could close, saying that each school must prove its financial stability in order to stay open.

"Even before abuse crisis last summer, we had engaged in a program to consolidate our schools," Lengwin said. "Now it's clear that won't be enough."