Analysis: The laity - the who and the how in sexual abuse reform

On Tuesday, the USCCB General Assembly in Baltimore gave over much of its morning session to hearing questions from the floor asking for clarity on proposals to increase transparency and accountability among its members 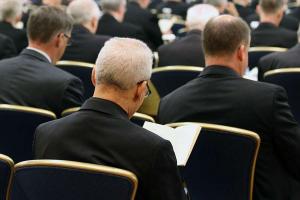 Baltimore, Md., (CNA) - Two major themes emerged from the interventions. The first was that several members desire to see a binding and clearly defined role for laity in the process of handling accusations against a bishop. The second was the need for - and lack of - a clear distinction between cases involving the sexual abuse of minors and those touching sexual misconduct more broadly.

Three documents related to abuse are under consideration by the bishops.

An "acknowledgement of episcopal commitments" seeks to establish a moral commitment by bishops to hold themselves to the same standards and measures as are currently applied to their priests and deacons.

A set of directives has been drafted to apply in the U.S. the new universal norms promulgated by Pope Francis in Vos estis lux mundi.

The third document lays out the powers available to diocesan bishops when it becomes necessary to limit the public ministry of their predecessor following scandal or accusations of misconduct.

Several bishops made calls to "institutionalize" the role of laity in the handling of accusations. Different suggestions included requiring a metropolitan bishop to establish a stable position for a lay person to receive all accusations, mandating that metropolitans employ laity to assess - not just investigate - claims against bishops, and insisting that the report of a layperson be included with a metropolitan's own conclusions in any submission to Rome.

Conference officials explained that all of these options are already open to any bishop charged with running an investigation, but what the USCCB cannot do, members were told to their seeming frustration, is curtail their own discretion given to them by the pope's norms.

At one level, the desire of bishops to entrench a role for lay men and women in the process of policing their own is understandable.

The McCarrick scandal continues to loom large in the minds of the faithful as Church authorities in Rome and the U.S. consider what (if any) information to make public about how he was able to sustain himself in the hierarchy. The recent release of a report into the allegations against former Wheeling-Charleston bishop Michael Bransfield, detailing substantial financial gifts to his brother bishops, has only underscored the crisis of credibility facing the hierarchy in the United States.

But simply "getting the lay people involved" is likely to prove at best an incomplete answer to the problems facing the bishops.

Invocations of "the laity" Tuesday morning came virtually unqualified, with little mention of particular areas of expertise or experience, though a lay person is not necessarily more qualified, per se, to evaluate an allegation against a bishop than anyone else. Other qualities, like independence and proven judgment, have yet to feature much in discussions.

The proposals for clearly defined and mandatory roles for lay people suggest an underlying discomfort among the bishops for the level of discretion the pope's recent reforms give an investigating metropolitan.

Having seen the criticism heaped on some bishops for their handling of particular cases, it might be forgivable if lurking under the calls for external accountability was a desire for the added security of a lay person '" any lay person '" to share the responsibility for tough decisions.

But such a mentality, even unspoken, would suggest the bishops remain concerned primarily with who should evaluate accusations against them, and not how they should be evaluated.

Towards the end of the session, a handful of questions emerged from the floor on the need to distinguish between sexual abuse of minors and other instances of sexual misconduct. Both are grave, some bishops noted, but they require different handling by people with different skillsets.

But what these differences are and how they should be applied to the messy reality of actual cases remains relatively undiscussed, much less answered so far.

Given the difficulty of parsing issues like consent in cases of clerical sexual contact, it is perhaps understandable that there is relatively little appetite to discuss such matters. But as bishops are learning through hard experience, if they do not move to set the criteria for assessing allegations of sexual abuse and misconduct '" especially concerning adults '" that criteria can be set for them after the fact when individual cases come to light and their judgement is assessed by an already cynical public. Moving to offer a clear consensus definition of sexual abuse vs sexual misconduct, and how to distinguish the two, could prove a more impactful contribution to transparency and accountability than reserving one or other role to a lay person.

Over the next few days in Baltimore, the bishops have a limited window to discuss the best path forward in recovering their own credibility. As they do so, they need to beware mistaking the means of lay involvement for an end in itself.

The true ends of justice and accountability can be served by a greater role for lay men and women, and by a real commitment to transparency. But it remains unclear how much real progress towards justice there can be until there is a full discussion and understanding of what justice looks like in different cases. Without that, talk of lay involvement may be little more than a definite means to an uncertain end.