After a story in the New York Post sparked new interest in the drama of a years-long legal dispute involving Katy Perry and the sisters of the Immaculate Heart of Mary, the Archdiocese of Los Angeles has reiterated their support for the care and well-being of the sisters. 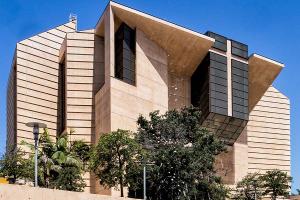 Los Angeles, Calif., (CNA) - "The main concern of the Archdiocese of Los Angeles is and always has been the care and well-being of all the IHM Sisters," the archdiocese said June 9.

"More than 10 years ago, as the members of the order declined to only five elderly Sisters, the Archbishop of Los Angeles undertook responsibility for their future care and well-being. Since then, the Archdiocese has continuously provided, on behalf of the IHM Institute, for all the living, medical and other costs for care of Sister Rita and all remaining IHM Sisters," the archdiocese added.

The archdiocese issued the statement in response to an interview that Sr. Rita Callahan, 81, gave to the New York Post, published June 8. Callahan, an IHM sister, told the New York Post that Perry had "blood on her hands" after another IHM sister, 89 year-old Sr. Catherine Rose Holzman, collapsed and died in a Los Angeles courtroom last year during ongoing legal proceedings over the sale of the sistersâ€ convent.

According to the interview Callahan gave to the New York Post, Holtzmanâ€ s last words were: "Katy Perry. Please stop."

The legal dispute is over the sistersâ€ former convent, which the remaining five, retired sisters vacated in 2011. According to the New York Post, the archdiocese "forced" the sisters to move. In their statement, the archdiocese said the sisters left the convent "because it could no longer accommodate their physical needs, and after the property became too costly for the retired Sisters to maintain."

According to the archdiocese, the IHM sisters agreed in 2014 to let the Archdiocese of Los Angeles sell their convent on their behalf, and with the agreement that the proceeds of any sale would go toward the care and well-being of the remaining IHM Sisters, who had all moved from the convent to retirement facilities.

"In 2015, the Archdiocese, on behalf of the IHM Institute, entered into an agreement with singer Katy Perry for Ms. Perry to purchase the property for $14.5 million," the archdiocese stated.

The archdiocese added that Perryâ€ s "all cash" offer, along with her plans to use the property as a family home and not for commercial purposes, seemed to be what was best for the sistersâ€ needs and appropriate for the propertyâ€ s "rich history."

At the same time, the IHM sisters, not wanting their property to go to Perry, tried to sell their convent to a businesswoman named Dana Hollister.

"We asked Dana to buy our property as we didnâ€ t want it to go to Katy Perry. Yes, we put the wheels in motion to sell our property," Callanan told the New York Post. "Was it legal? Probably not entirely."

That sale was eventually blocked by the archdiocese, after a long legal battle.

"The Archdiocese fully supported all of the Sisters throughout this process to ensure they were cared for during this lengthy legal battle," the archdiocese stated. "The Archdiocese has always sought to act in the best interest of all IHM Sisters, both to fulfill their request to sell the Instituteâ€ s property and to provide for their care."

The archdiocese said it will "continue to be in communication" with Perry about her "continued interest in the property."

"Regardless of any sale, the Archdiocese has and will continue to provide and care for all the IHM Sisters for the rest of their lives," the archdiocese said.