Several bishops and other Church leaders have said they will return money given to them by retired West Virginia Bishop Michael Bransfield, who is accused of serially sexually harassing or coercing seminarians and young priests, while misusing diocesan funds on a lavish lifestyle and five-figure "gifts" to Churchmen in leadership positions. 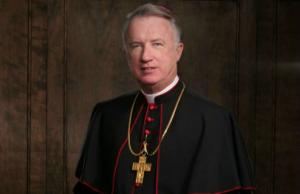 Baltimore, Md., (CNA) - The Washington Post reported June 7 that Cardinal Kevin Farrell, prefect of the Vatican Dicastery for Laity, Family, and Life, will return $29,000 to the Diocese of Wheeling-Charleston, after that amount was given to him by Bransfield.

Archbishop William Lori, apostolic administrator of Wheeling-Charleston and the bishop charged with overseeing an investigation into Bransfield, will return to the diocese $7,500 given to him by Bransfield.

Lori has faced criticism after removing from a draft report to the Vatican the names of those bishops who received large checks from Bransfield.

On Friday, Lori said that he should have left the names on the report, but removed them because he thought their inclusion would be a distraction, or imply that those who had received checks had been influenced by them.

"If I had to do it over again, especially at a time when we're trying to create greater transparency and accountability, the report would have included the names of those bishops who received gifts, including my own, with some notation that there was no evidence to suggest that those who received gifts reciprocated in any way that was inappropriate," Lori said.

A source close to Cardinal Donald Wuerl, emeritus Archbishop of Washington, told CNA that Wuerl would also return the gifts he had been given by Bransfield.

Archbishop Carlo Vigano, former apostolic nuncio to the U.S., told the Washington Post that the $6,000 he had received from Bransfield had been given to charity.

Bransfield's resignation was accepted by Pope Francis last September, eight days after he turned 75, the age at which diocesan bishops are required by canon law to submit a letter of resignation to the pope. Lori subsequently barred him from public ministry in both Wheeling-Charleston and Baltimore.

In a June 5 letter, Lori stated that accusations of sexual and financial misconduct by Bransfield had been determined to be "credible" by an independent investigation. Investigators discovered that Bransfield had managed to erode and evade oversight and policy controls by fostering "a culture of fear of retaliation and retribution" in the diocese.

Lori said that while there was no "conclusive evidence" of sexual misconduct with minors, the investigation '" led by five lay experts '" had found indications of consistent sexual misconduct and harassment by Bransfield against adults.

"The team uncovered a consistent pattern of sexual innuendo, and overt suggestive comments and actions toward those over whom the former bishop exercised authority," Lori said.

Lori also confirmed that investigators had established a pattern of serious financial misconduct by Bransfield throughout his tenure as bishop.

"The investigative report determined that during his tenure as Bishop of Wheeling-Charleston, Bishop Bransfield engaged in a pattern of excessive and inappropriate spending," Lori said, citing renovations to multiple residences and the misuse of Church funds "for personal benefit on such things as personal travel, dining, liquor, gifts and luxury items."