Peoria bishop 'overjoyed' that Venerable Sheen's body will be transferred

The Diocese of Peoria has confirmed that the Archdiocese of New York has "indicated their willingness" to cooperate with the transfer of Venerable Fulton Sheen's remains to Peoria, potentially clearing the way for the Illinois-born archbishop's beatification. 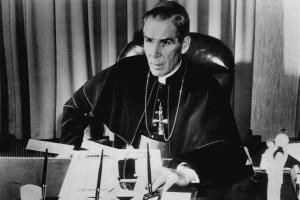 Sheens will had declared his wish to be buried in the Archdiocese of New York Calvary Cemetery. Soon after Sheen died, Cardinal Terence Cooke of New York asked Joan Sheen Cunningham, Sheen's niece and closest living relative, if his remains could be placed in the crypt of St. Patrick's Cathedral in New York City, and she consented.

However, Cunningham has since said that Sheen would have wanted to have been interred in Peoria if he knew that he would be considered for sainthood. In 2016, she filed a legal complaint seeking to have her uncle's remains moved to the Cathedral of St. Mary in Peoria.

The New York Court of Appeals denied the Archdiocese of New York's appeal to keep his remains there June 7. The appeals court had dismissed New York's previous appeal in May.

The appeals court first unanimously ruled that Sheen's remains be transferred to Peoria in March 2019. The Superior Court of New York had issued a similar ruling in June 2018.

The Peoria diocese opened the cause for Sheen's canonization in 2002, after the Archdiocese of New York said it would not explore the case. In 2012, Benedict XVI recognized the heroic virtues of the archbishop.

However, Bishop Daniel Jenky of Peoria suspended the beatification cause in September 2014 on the grounds that the Holy See expected Sheen's remains to be in the Peoria diocese.

The New York archdiocese, however, has previously said that Vatican officials have said the Peoria diocese can pursue Sheen's canonization regardless of whether his body is at rest there.

Sheen was born in Illinois in 1895, and was ordained a priest of the Diocese of Peoria at the age of 24. He was appointed auxiliary bishop of New York in 1951, and he remained there until his appointment as Bishop of Rochester in 1966. He retired in 1969 and moved back to New York City until his death in 1979.

An initial court ruling had sided with Cunningham, but a state appeals court overturned that ruling, saying it had failed to give sufficient attention to a sworn statement from a colleague of Archbishop Sheen, Monsignor Hilary C. Franco, a witness for the New York archdiocese.

Msgr. Franco had said that Sheen told him he wanted to be buried in New York and that Cardinal Cooke had offered him a space in the crypt of St. Patrick's Cathedral. The appeals court ordered "a full exploration" of the archbishop's desires.

"The Trustees of St. Patrick's and the Archdiocese believed that it was not simply their duty, but a solemn obligation, to seek to uphold Archbishop Sheen's last wishes, as directed in his Will, to be buried in New York '" a position held until recently by Joan Cunningham herself," Joseph Zwilling, spokesperson for the Archdiocese of New York, told CNA June 8.

"In light of the court's denial of further appeal, the Trustees of St. Patrick and the Archdiocese will work cooperatively with Mrs. Cunningham and the Diocese of Peoria to arrange for the respectful transfer of Archbishop Sheen's mortal remains."

Bishop Jenky thanked Patricia Gibson, the diocese's chancellor and attorney, for her work on the case, and asked for prayers for the advancement of the sainthood cause of Venerable Sheen.