Analysis: Bp. Bransfield, the USCCB, and the Holy Spirit

The U.S. bishops arrive in Baltimore next week for their second plenary meeting in the year of serious crisis that began last June. 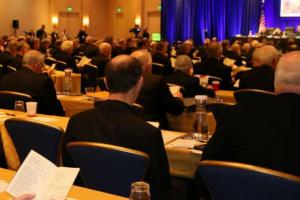 Washington D.C., (CNA) - They will meet, again, under the specter of another demoralizing scandal. This one, again, involves a well-connected bishop, a ledger of extravagant gifts, and allegations of abuse from priests and seminarians subject to the bishop's authority.

The Washington Post reported June 5 that a months-long ecclesiastical investigation of Bishop Michael Bransfield, formerly of Wheeling-Charleston, West Virginia, uncovered evidence that the bishop had a reputation for being sexually inappropriate with seminarians and young priests, that he may have had a substance-abuse problem, and that he used diocesan funds generated from its Texas oil fields to support a lifestyle of luxury, and to give $350,000 in cash gifts to Vatican officials, fellow bishops, and other clerics.

More troubling, the Post's report suggests that when seminarians and young priests raised concerns about Bransfield's behavior, they were met with indifference, from authorities unwilling to intervene.

Some Catholics have already noted that Bransfield's gift-giving habit likely demonstrates how Theodore McCarrick's ecclesial career prospered during his decades of sexual abuse.

Like Bransfield, the former cardinal is reputed to have given large cash gifts to brother bishops and to Vatican officials, which might have contributed to his apparent ability to escape the consequences of his actions, and to navigate curial back channels with ease.

In light of the Bransfield report, Catholics are now asking whether there is any evidence that an apparent culture of clubby loyalties cultivated through "personal gifts" has actually come to an end.

Some observers have asked whether bishops can ever really be expected to hold one another to accountability, if five-figure checks are exchanged between some of them with a certain degree of regularity.

It might be difficult, some Catholics note, to tell someone to change his ways after he has given you $29,000 to renovate your apartment.

Is this, those Catholics have asked, what Pope Francis means when he condemns clericalism?

In fact, some of those bishops have demonstrable track records of integrity. And bustarella culture - the customs of giving cash or checks to visiting bishops or dignitaries - is so common in the Church that it would be unreasonable to conclude that every person who has received gifts, even large gifts, from figures like Bransfield or McCarrick bears some personal culpability for their ecclesiastical careers. Indeed, some bishops maintain charity accounts with the financial gifts they're given, and use that money to help struggling families and others.

But what now seems clear is that in a culture in which large cash gifts are distributed with some regularity, the appearance of impropriety is everywhere, and the probability of cover-ups and corruption is quite high. Such a culture, many Catholics are likely to conclude, is, at the very least, systemically deficient at preventing a kind of laissez faire tolerance for malfeasance.

For that reason, the Bransfield report does further damage to the credibility of the U.S. bishops, at a moment when, for many practicing Catholics, their credit is already running quite low.

It is especially worth noting that the credibility of bishops is not suffering only among the usual crowd of doctrinal dissenters and social libertines. While it is clear that this crisis has been exploited by some for political or person gain, for profit, and to advance ideological agendas, U.S. bishops would be mistaken to underestimate the despondence the crisis has occasioned among their most ardent supporters, and their most orthodox parishioners.
It is faithful, practicing, engaged Catholics - chancery staffers and parish priests among them - who, at this moment, are struggling mightily to gauge, and come to terms with, a problem that now seems much larger in scale than they had initially envisioned.

The initial McCarrick scandal raised questions about a particular situation: "Who knew what, and when, about this man's sexual abuse?"

The Bransfield report forces much broader questions: "Are other bishops living like this? How many people knew and did nothing? How many bishops are buying silence with 'gifts? "

The breadth of those questions, for some Catholics, has led to a new level of discouragement.

Of course, Catholics - bishops, priests, religious, and laity alike - most likely are suffering from a kind of crisis fatigue. But the Bransfield report is a sign to most observers that the Church has not yet turned a corner. In fact, to many, the scandal itself is still unfolding.

Pragmatically, though, the U.S. bishops have made concrete progress in addressing the substantive issues that have emerged in the scandal, as has Pope Francis.

The bishops in Baltimore will vote on a set of guidelines to accompany the pope's Vos estis lux mundi.

The bishops will likely debate the degree to which lay review boards should be featured more prominently in the draft text, and some bishops are likely to call for a much more explicit call for their use by metropolitans in the investigation of bishops accused of misconduct or neglect.

But by most expert accounts, the norms of Vos estis lux mundi represent a manageable and practical approach to addressing the issue of episcopal misconduct and neglect.

The bishops will also vote on a document of episcopal standards - a kind of episcopal code of conduct - and on a set of guidelines for how they should treat bishops who have been removed from office because of misconduct or negligence.

The measures the bishops have developed this year, in an often rocky partnership with the Roman Curia and Pope Francis, are, despite the challenges in the process, widely considered to be good tools, and many experts have told CNA they expect they will help to manage and address the problems of episcopal misconduct and coverup.

But the neat efficiency of those measures is likely to be seen, by some Catholics, as a symbol of a broader problem.

Writing this week in National Review, Kevin Williamson observed that "conservatives believe ...that most problems are to be managed rather than solved, that we should aim at mitigation rather than transformation, that we are better positioned to assuage than to conquer, that things are what they are and must be dealt with on that basis."

The observation might well apply to the situation of the Church.

Bishops, very often, and especially when working through the episcopal conference, seem inclined mostly to manage problems, especially those tied up with the intractable reality of evil.

Bishops, at least contemporary American bishops, tend to address problems through new policies or processes, which are unlikely to have dramatic or immediately visible effect.

Their approach does have advantages. Few would dispute that the policies advanced after the abuse crisis of 2002 have fostered a cultural change in the U.S. Church on the issue of child and youth protection. Many argue that over time, they've made the Catholic Church one of the safest places for children in America. But they are wonky, technical, bureaucratic, and the cultural shift they foster takes time.

But angry and discouraged American Catholics have not spent the last year calling for policies. They've called for dramatic symbols of contrition and resolution for change. They've called for prophetic voices, and maligned their bishops for not seeming to measure up.

Catholics of all backgrounds, viewpoints, and perspectives have demanded a sign that things in the U.S. Church really will be different, and they don't feel they've been heard.

The issue is that the bishops are working toward reform, while most of the Church is calling for renewal.

Reform comes often through new disciplines, policies, processes, and agreements. Renewal rushes in like fire, bringing new energy and vitality, bringing new freedom and hope. Both are important, and both are needed now.

The U.S. bishops can't make a renewal happen. At least not in their committee meetings and floor debates. To win the trust of Catholics, it seems they would do well to acknowledge that.

If the bishops in Baltimore express that their efforts at reform are intended to address specific problems, and will have limited effectiveness, Catholics may be comforted by their candor. And if they express that for an ecclesial culture that seems fundamentally broken, the renewal that's needed can come only through the Holy Spirit, their humility might help them to reestablish bonds of solidarity with their flocks.

And if the bishops spend their time praying for the Holy Spirit to bring renewal to the Church, and inviting other Catholics to do the same, they might be surprised by the results.

Reform can gradually shift culture. Renewal can upend it. And the bishops, if they wish to be candid with U.S. Catholics, might consider admitting the limitations of their reforms, and then begging the Holy Spirit to renew the Church.

On Sunday, the Church will celebrate Pentecost.

In the year since last Pentecost, the Church has faced the McCarrick revelations, the Pennsylvania grand jury report, the specter of federal and state investigations, allegations of abuse or neglect on the part of more bishops and cardinals, police raids in chanceries, the Vigano letters, the disappointing November USCCB meeting, the Zanchetta scandal, the resignation of Cardinal Donald Wuerl, allegations of grave negligence on the part of USCCB president Daniel DiNardo, and now the Bransfield report.

There has not yet been any substantive release of information on McCarrick. There have not yet been answers to the straightforward questions about his finances, his allies, and his protectors.

As the bishops begin their meeting, there may be no more important plea on their lips than: "Come, Holy Spirit!"