Bishop Thomas Tobin of Providence responded Sunday to controversy that ensued from a tweet admonishing Catholics not attend or support "gay pride" festivities. 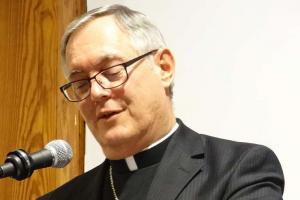 Providence, R.I., (CNA) - "The Catholic Church has respect and love for members of the gay community, as do I," the bishop wrote in a statement Sunday, adding that "individuals with same-sex attraction are beloved children of God and our brothers and sisters."

On Saturday, Tobin tweeted: "A reminder that Catholics should not support or attend LGBTQ 'Pride Month' events held in June," tweeted Tobin on Saturday, the first day of the month. "They promote a culture and encourage activities that are contrary to Catholic faith and morals. They are especially harmful for children."

Each year during June, cities around the world host LGBT "Pride" celebrations, which often include parades, parties, and concerts celebrating the gay rights movement and celebrating the LGBT lifestyle. June was chosen in memory of the Stonewall Riots in New York, which are considered a key event in the gay rights movement in the United States, and which took place from June 28-29, 1969.

Among those who responded negatively to Tobin's tweet were actress Mia Farrow, who accused Tobin of "pure ignorance & bigotry" and called him a "hate-filled hypocrite." She also linked Tobin's tweet to clerical child sexual abuse."Kids are far more in danger at a catholic church [sic] than at a gay pride gathering," added Farrow.

Actor Wilson Cruz, who played the character Rickie Vasquez on the short-lived series "My So-Called Life" and the character Angel in the play "RENT," responded with "You know what's proven to be actually harmful to children..? The Catholic Church."

Bishop Joseph Strickland of Tyler (TX) defended Tobin on Twitter, republishing the original tweet and adding "Thanks for speaking up Bishop Tobin....let us be mighty loving messengers of truth and light in Jesus Christ."

On Sunday, Strickland elaborated on his support, saying Tobin was "simply speaking for one truth of the deposit of faith."

"God made humans male & female," continued Strickland. "Certainly those who are confused about their identity need Christ's love & compassion, let's remember Christ's love is expressed when dies on the cross for the truth."

In a statement published to the Diocese of Providence website on Sunday, Tobin expressed regret that his tweet had "turned out to be so controversial in our community, and offensive to some, especially in the gay comunity." He did not apologize for or retract any of the content of his original statement.

"That certainly was not my intention, but I understand why a good number of individuals have taken offense," said Tobin, also acknowledging that he had received "widespread support" for his tweet.

While noting that he was not motivated by hatred, Tobin said that as a bishop, "my obligation before God is to lead the faithful entrusted to my care and to teach the faith, clearly and compassionately, even on very difficult and sensitive issues," said Tobin. "That is what I have always tried to do - on a variety of issues - and I will continue doing so as contemporary issues arise."

Tobin acknowledged that there was to be a rally in protest of his words on Sunday evening, which he said he hoped would be a "safe, positive and productive experience" for all attendees.

"As they gather I will be praying for a rebirth of mutual understanding and respect in our very diverse community," he added.