Contemporary America is "mission territory," and young Catholics must step up to respond to the twin crises of Church corruption and increasing religious disaffiliation, Auxiliary Bishop Robert E. Barron of Los Angeles said in a recent speech. 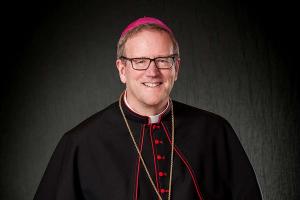 "Don't wait for other reformers to arise; this is your moment to meet this crucial moral challenge. And no pusillanimous people need apply," he said at the May 11 commencement for Thomas Aquinas College in Santa Paula, Calif., where the college's graduating class numbered 83.

Barron, citing Pope Francis, said that corruption is not far behind when the Church fails to go outward and instead turns in on itself.

For Barron, the Thomas Aquinas College campus reminded him of Chicago's Mundelein Seminary because of its "distinctive blend of natural and man-made beauty." He compared it to "something of a Catholic heaven on earth." It is a campus he said offers liturgy, prayer, fellowship, and "deep communion with the saints and geniuses of the Catholic tradition."

"Just as the students at Mundelein were not meant to stay on the grounds of the seminary, so you are not meant to stay at this lovely place," he added. "Rather, you are meant to go forth, carrying what you have received and cultivated here, in order to sanctify our suffering world."

In his remarks, Barron named two challenges that call forth "heroic moral excellence," namely corruption in the Church and "the massive attrition of our own Catholic people, especially the young."

"Wicked priests and clueless religious superiors are, sadly, nothing particularly new in the life of Godďż˝ s people," he said.

"Undermining the work of the Church in practically every way, the clerical sex abuse catastrophe has been the devilďż˝ s masterpiece," the bishop continued, acknowledging that many Catholics face the temptation to leave the Church.

"But it is my conviction that this is not the time to leave; this is the time to fight," said Barron.

He encouraged the new graduates to fight by entering the priesthood or religious life as well as to "fight by your very holiness of life, becoming the saint that God wants you to become."

The young should fight by "calling for real reform" and "insisting that the guilty be held accountable." He encouraged graduates to do a daily Holy Hour to purify the Church, to perform the corporal and spiritual works of mercy, to take part in the sacrifice of the Mass, and to evangelize. They should sanctify their family, their workplace, public life, and the realms of politics, sports and entertainment, he said.

For every one person who becomes Catholic, six leave the faith.

"Any way one looks at these statistics, one must conclude that we are hemorrhaging young people from religion in general and Catholicism in particular," the bishop said.

Disbelief in the teachings of Christianity is the principal reason for people leaving the faith. They find Christianity "intellectually untenable," Barron said.

However, he suggested that Thomas Aquinas College graduates are "specially qualified for the arduous task of engaging the army of skeptics who have wandered from the Church." The graduates' contemplation of great intellectuals is good in itself, but at this moment it should give rise to "active evangelization and compelling apologetics."

Barron drew on St. Thomas Aquinas' reflections on the virtue of magnanimity, "the quality of having a great soul," and the vice of pusillanimity, faintheartedness or fear of attempting moral excellence.

"It seems to me that the entire purpose of the programs here at Thomas Aquinas College is to produce magnanimous people, young women and men of great souls, capable of high moral achievement, willing and able to undertake arduous tasks for which they will rightly merit great honor," he said. "Thomas Aquinas College has no interest in giving rise to pusillanimous graduates, men and women with small souls, who would shrink from the difficult moral challenge of the present time."

He told the graduates they faced "arduous tasks" and "choppy seas," but he encouraged them that they had been prepared.

"Your four years here have given you great souls. Let them be unleashed!" his commencement address concluded. "God bless you all!"