A Catholic girls' high school has announced that its alumni magazine will publish notices of the same-sex legal unions of former students. The decision comes after a school alumnae group organized to advocate for a change to school policy. 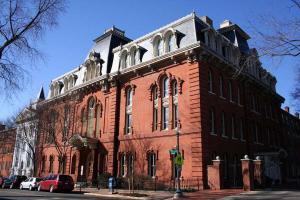 Washington D.C., (CNA) - Georgetown Visitation Preparatory School in Washington, DC, is run by the Salesian Sisters of the Order of the Visitation of Holy Mary. The school announced its policy change in an emailed letter sent May 3 to school students, families, and alumnae.

Sister Mary Berchmans VHM, superior of the monastery responsible for the school, and the school's former president, signed the email.

The letter was not signed by Dan Kerns, Head of School, nor by any other member of the Board of Directors. Kerns is due to retire from the school in July.

Berchmans' email said a decision to recognize the same-sex legal unions of alumnae had been reached by "school and Monastery leadership after much prayerful consideration and thoughtful dialogue."

Part of that dialogue appears to have taken place with a small group of pro-LGBT alumnae and activists.

Before the decision was made, alumnae calling themselves the Georgetown Visitation Alumnae for Equity established a private Facebook group in which they discussed efforts to encourage the school to recognize same-sex unions of alumnae.

In the Facebook group, one former student posted the text of an email she sent to Kerns and Berchmans, in which she described herself as a "proudly gay alumna" and complained that the school had declined to publish in its magazine the notice of a same-sex union filed by another alumna.

"I understand that recently a fellow alumna submitted a wedding announcement and was denied publication. It is my further understanding that the administration's rationale for the lack of inclusion is that you [the school] ďż˝~have an obligation as a Catholic school to take no public position that is in conflict with the sated teachings of the Church at this moment.'"

The former student noted that notice of her own "marriage and same sex partnering" was included in the alumnae notes section of the magaizine in the early 2000s.

A spokesperson for the school told CNA on May 15 that "Live Jesus" is an articulation of the Salesian spirituality and part of the daily life of the school community.

"This phrase is part of our Salesian charism and a deeply engrained part of who we are as a community of faith," the spokesperson said.

The alumna later posted to the Facebook group the text of a reply from Berchmans, who said that the school was working "towards a solution."

In her May email to the school community, Berchmans used similar language to the former student's letter, writing that she had been "reflect[ing] upon what it means to Live Jesus in relationship with our LGBTQ alumnae."

The religious sister also wrote that she had been praying over what she called the "contradiction" between the Church's perennial teachings on human sexuality and the Gospel imperative to love.

"Beginning with the fall issue of our alumnae magazine, we will publish news of our alumnae's same-sex unions, along with all updates our alums choose to share with their classmates."

There are divergent accounts of how the school's decision has been received among the Visitation community.

A member of the Facebook group posted earlier this month that "Sr. Mary Berchmans is struggling from the amount of negative pushback from members of the Visitation community" after Berchmans announced the decision. The same member noted that Berchmans might be required to "defend" her decision to the school's board of directors, and called for letters of support to be sent to her and the school.

The Washington Post reported May 13 that a Visitation spokesperson called responses to Berman's email "overwhelmingly and heartwarmingly positive."

The Post also reported that school officials had said there were "few complaints about the policy shift from students, parents and the school's alumnae."

Before the Washington Post's story was published, a participant in the Georgetown Visitation Alumnae for Equity Facebook group posted that a Post reporter was working on the story, was a friend of another group member, and urged members of the group to contact him.

---
One Visitation alumna told CNA that she only learned of the school's decision when her daughter, a current Visitation student, received the email from Berchmans.

"It was a remarkable way to find out," she said. "You don't expect your child to be coming home and telling you about these things when they are supposed to be at a school forming them in the faith."

The mother told CNA that many other parents objected to the decision but were concerned about confronting school administrators and faculty, noting that school officials seem to have already tacitly approved of retaining a teacher at the school who is widely known to be in a same-sex legal union.

A second parent with daughters at the school told CNA that within the school community there is pressure to conform and support "so-called LGBTQ values." She said many parents feel pressure to support the same-sex union of one teacher, even if they feel it is inapproproate in the context of the school's commitment to Catholic teaching.

"All the parents felt like we had to support this teachers 'marriage,' and we didn't really know how to deal with it," one parent said.

"You worry about soft discrimination against the children," another mother said. "A's become B's very quickly, and you do not want to have a reputation as one of the 'angry parents.'"

One parent also noted that the school holds an annual "diversity day" for which the students are assigned specific personas to assume, including homosexuality.

On May 15, the spokesperson for Visitation said that the school administration was "deeply troubled" by the concerns expressed by parents to CNA.

"It is offensive to us, it is not who were are at all." The spokes person told CNA that the school had an "open door policy" on the issue and "welcomed conversation."

"We have responded personally to every single individual who brought forth a concern."

The spokesperson also clarified that on "diversity day," students were encouraged to complete anonymously complete a survey about various aspects of their own identity and background.

The anonymous responses are redistributed to the students at random and they are asked as a body to stand up according to their randomly assigned answers to illustrate in an anonymous way the diversity of the school community.

"Its a way of helping people understand how diverse our community is without anyone having to come forward and expose a vulnerable part of themselves," the spokesperson explained.

"No one at any time is asked to embody a persona of being homosexual."

The same parents were also quick to insist that much of the school's religious education and other programs are faithful to Catholic teaching.

"My daughter was taught the Theology of the Body, sound pro-life teaching, exactly what you would want in a Catholic school," one mother said. "I think there is a minority among the faculty and staff that have gradually taken over parts of the school community and are just really committed to a very politically progressive agenda."

The Washington Post also reported May 13 that the Archdiocese of Washington said it had not been informed or consulted before Visitation's decision was made and the email was sent.

While the school is not directly affiliated with the archdiocese, the archdiocese is responsible for ensuring independent Catholic schools maintain their Catholic identity, and is charged with providing advice and guidance on matters related to Church teaching.

An email circulated by school spokesperson Caroline Handorf to the school community May 13 said that representatives from the archdiocese had been made aware of the decision.

"We have been in touch with several contacts in the Archdiocese, including Bishop Michael Fisher, to ensure that we are aligned as we move forward and they are assured of our continued commitment to our Catholic identity and to the teachings of the Church," Handorf wrote.

An archdiocesan spokesman told CNA May 14 that the archdiocese "was not made aware of the discussion on Catholic identity or the recent decision of the school to communicate the change for their alumni publication until after the letter announcing the decision was distributed to the wider Georgetown Visitation community."

The archdiocesan spokesman also told CNA that Bishop Fisher had not been contacted prior to the email's circulation.

On May 15, Handorf told CNA that "I can't speak for the archdiocese, but I can say we have been in touch with them and our goal is to work with them as we move forward and remain committed to our Catholic identity."

The Catechism of the Catholic Church teaches that "deep-seated homosexual tendencies" are "objectively disordered" and constitute a trial for those who experience them.

People who experience same-sex attraction must be accepted with respect, compassion, and sensitivity, the Church says, and "every sign of unjust discrimination in their regard should be avoided."

Successive popes have condemned the move towards civil recognition of same-sex unions by the state and expressed their concern that the concept undermines the natural law of the family and marriage, which is between a man and a woman.

Pope Francis has spoken about a state of "critical confusion at the moment" regarding marriage and gender in the world, observing that the word "marriage" can never be used to describe same-sex unions.

Speaking about the essential nature of marriage as between a man and a woman, Francis said in 2017 that "we cannot change it."

"This is the nature of things," the pope said, while observing that "we do not joke around with truth."

Georgetown Visitation was founded in 1799, and is the oldest Catholic high school for girls in the United States. Tuition is $30,100. Approximately 500 students are enrolled in the school.

This story was updated May 15 following responses recieved from a spokesperson for Georgetown Visitation.