American residents deserve permanent legal protection from deportation and a pathway to citizenship if they came to the U.S. as minors or are from countries facing emergencies, natural disasters and political oppression, the U.S. bishops have said, noting that many such people contribute to their communities and Catholic parishes. 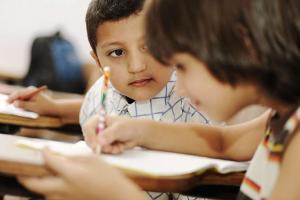 Washington D.C., (CNA) - These residents are "vital members of our community who are going to school, working to make our communities better and raising families," Bishop Joe S. VĂˇsquez of Austin, chair of the U.S. Conference of Catholic Bishops' Committee on Migration, said in an April 10 statement.

"We need a permanent legislative solution for those who have spent their lives contributing and living in the United States, the country they know as home."

Vasquez wrote two separate letters to the Senate in support of two bills: the Development Relief and Education for Alien Minors Act, known as the DREAM Act and numbered S. 874; and the Safe Environment from Countries Under Repression and Emergency Act, known as the SECURE Act and numbered S. 879.
The DREAM Act, sponsored by Sens. Linsey Graham, R-N. Carolina, and Richard Durbin, D-Ill., would protect "numerous immigrant youth" from deportation, especially the 700,000 who received Deferred Action for Childhood Arrivals status under the Obama Administration. It focuses on youth who entered the U.S. as minors, whom advocates characterize as "dreamers."
"It is both our moral duty and in our nation's best interest to protect these youth and allow them to reach their God-given potential," Vasquez said in one April 10 letter, adding that many of these youth know America "as their only home."
"My brother bishops and I believe in protecting the dignity of every human being, particularly that of our children," he added. "The Catholic bishops have long supported these immigrant youth and their families who are contributors to our economy, academic standouts in our universities, and leaders in our parishes. These youth have grown up in our country, some even choosing to put their lives on the line to serve in our armed forces. They truly exemplify the extraordinary contributions that immigrants can provide to our nation."
Eligible residents, including recipients of Deferred Action for Childhood Arrival protections, must meet several qualifications, including continuous U.S. residence for four years. They must pass a background check; demonstrate English proficiency; and seek post-secondary education, honorable military service, three years of U.S. employment, or otherwise prove hardship.
The DREAM Act was first proposed in 2001 but has never passed Congress.
The SECURE Act, sponsored by Sen. Chris Van Hollen, D-Md., would apply to residents with Temporary Protected Status or Deferred Enforced Departure status. It would create a pathway to lawful permanent status.
Temporary protected status protects from deportation and allows lawful work for nationals whose home country is unsafe due to natural disaster, political turmoil or other reason designated by law. About 320,000 residents who had TPS status have seen it canceled in recent years and depend on ongoing litigation to continue their legal residence. They are parents to over 273,000 children who are U.S. citizens.
"We support legislative efforts to fully integrate hard-working Dreamers and temporary protected status holders into the United States," Vasquez said
Deferred enforcement departures are granted by the U.S. president to individuals from designated countries on a temporary, discretionary basis.
Residents with either status are "business owners, professionals and community leaders," said Vasquez. "We know these individuals to be hardworking contributors to American communities, Catholic parishes, and our nation."
A legislative solution for these residents and their families is "critical for humanitarian and regional stability." Their future is "a family unity and human dignity issue," said Vasquez.
SECURE Act provisions would allow present or past TPS-eligible residents, or residents with deferred enforcement departure status extended beyond Sept. 28, 2016, to proceed with lawful permanent resident status if they meet qualifications like continuous presence in the U.S.; ability to pass a background check; and ability to meet all criminal and national security requirements for eligibility.
Vasquez added that Pope Francis exhorts Catholics to "act in solidarity with refugees, migrants, and all those seeking safety from the ravages of violence, environmental disasters, and despair."
He pledged the U.S. bishops' willingness to work with Congress "to reform our immigration system in a humane, just, and common-sense manner" and the Catholic Church's readiness to welcome eligible U.S. residents and their families into parishes and communities.
There are about 200,000 Salvadorans, 50,000 Haitians, 2,500 Nicaraguans and 1,000 Sudanese who have temporary protected status, the Washington Post reported earlier this year, though the Trump administration has declared that such status will expire for many of these people in upcoming months and years.

Additionally, the bishops have spoken on behalf of Liberians and Hondurans and have sought protected status for Venezuelans, among others.

The U.S. bishops have launched an online campaign dedicated to public education on immigration issues and advocacy of immigration and refugee legal reform.