It's taken 10 years but Heather Collins is now an American citizen. 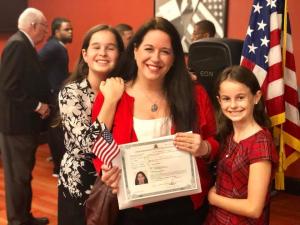 By Janet Morana, Executive Director, Priests for Life - At a Naturalization Oath Ceremony March 22 at a Department of Homeland Security office in Orlando, the Canadian-born wife, home-schooling mother, devout Catholic and artist swore her oath of allegiance to the United States.

"I'm just so thankful," the Titusville resident said. "I have always loved this beautiful country."

"Over this past decade," said her husband, Rob Collins, social media developer for Priests for Life, "we have submitted hundreds of documents, payed thousands of dollars and traveled cross country for the privilege of trying to become an American citizen.
I am so proud of Heather and I know how proud she is for this!"

It was in 2009, just after their second daughter was born and Heather's father died that she and her husband, Rob Collins, decided to embark on the process to legally immigrate to the U.S. and to pursue citizenship.

The journey was time-consuming and expensive '" "everything has a fee attached," Heather said '" but the end goal was worth it.

Rob's father was an American who never relinquished his citizenship when he married a Canadian and moved north. After gathering all the necessary documents - long form birth certificate, health insurance information, marriage certificate, immunization records, tax returns and other records '" and undergoing a background check, Rob was given an appointment at the U.S. Consulate in Calgary, Alberta '" 1,000 miles away from the Collins' home in Regina, Saskatchewan.

In February 2010, they packed up the girls and drove to Calgary. "We had to go to Calgary three or four times," Heather says, "but they treated Rob like gold. He was considered an American born abroad."

In August of that year, Heather and the girls, Mary Faustina, now 12, and Gianna Maria, now 10, were summoned to the U.S. Embassy in Montreal. They flew there and were subject to immunizations and other health tests. Rob applied to be their sponsor in the U.S., and for that he had to prove he had a home and a job in the U.S.

They went back to Regina and Rob started applying for jobs. His first job interview, near Atlanta, turned out, completely by coincidence, to be in the same neighborhood where his sister lived. In September 2011, he rented an apartment and took the job. The girls and his wife remained in Regina, maintaining a second household.

Two months later, Heather and her daughters received their temporary immigration packets, which were valid for six months and allowed them into the U.S. A month later, they got their green cards, valid for 10 years.

Then the countdown began: Heather had to live in the U.S. for three years before she could apply for citizenship. The process for the girls was shorter and simpler, since Rob already was a citizen of the U.S.

The girls received their U.S. passports in November 2015 and in 2017, Heather started her final push for citizenship. In February 2018, she was informed that she had been assigned to the Atlanta office, where she had to go to be fingerprinted and have an eye scan. She went home with a copy of the naturalization test booklet and started studying.

When the family moved to Titusville in May 2018, things hit a snag. She had filed a change of address but it didn't go through, and she was informed she had to take the citizenship test in January 2019 in Atlanta. Resigned to having to make the 500 mile trip, she started making phone calls in the hope of getting her application transferred to Orlando. It worked. She submitted another change of address and was instructed to go online every day to look for an opening for an appointment to go to the Orlando office and explain the situation.

Finally, test day arrived on Feb. 19, 2019.In studying for the test, she had to memorize the answers to 100 questions to be ready to answer 10on test day. Of the 10, she had to get six right. That proved no problem for Heather.

"You have to know your lawmakers," she said with a laugh. "We learned a lot as a family."

Candidates for citizenship also must demonstrate proficiency in English, though that requirement is waived for some applicants, based on age and length of residency in the U.S.

On Friday, March 22, Heather was one of 80 people from 30 countries reciting the Pledge of Allegiance and swearing loyalty to the United States. As her proud husband and daughters looked on, Heather found herself tearing up."It just struck me how important this was," she said.

Heather and her family traveled thousands of miles and spent thousands of dollars to get to today. Rob and her daughters beamed as she swore allegiance to the United States of America.

Heather's journey to citizenship was not easy nor was it inexpensive but this is what it takes to legally become an American citizen. Legal immigration has been a gift to our country and I welcome all those who, like Heather, come here intending to be productive and engaged in our society.

I understand there are some people fleeing dire and deadly circumstances and for them, there is a quicker path for legal entry. But in my opinion the thousands of people showing up at the southern border and demanding to be let in should take a lesson from Heather and begin their path to citizenship the way she did. It's only fair.

As for Heather, becoming an American citizen, "is a big deal for me. In Canada we were always so aware of what was going on in America. I'm so happy I'll be able to vote."