The attorney general of West Virginia has filed a lawsuit charging that the Diocese of Wheeling-Charleston and its former bishop knowingly employed sex abusers in roles that worked with children and failed to disclose their backgrounds to parents. 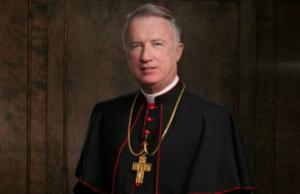 Charleston, W.Va., (CNA) - The lawsuit alleges that the diocese advertised a safe learning environment in its schools while employing personnel who had been convicted or credibly accused of sexual abuse.

It says the diocese and retired Bishop Michael Bransfield covered up potentially criminal behavior, failing to be transparent with parents while allowing abusers to work around children.

In a March 19 statement, the Diocese of Wheeling-Charleston said that it "strongly and unconditionally rejects" the assertion that it "is not wholly committed to the protection of children, as reflected in its rigorous Safe Environment Program, the foundation of which is a zero tolerance policy for any cleric, employee or volunteer credibly accused of abuse."

"The Program employs mandatory screening, background checks and training for all employees and volunteers who work with children," it said.

The complaint draws attention to the case of Fr. Victor Forbas, saying the diocese knew of a credible abuse allegation against the priest but still placed him in charge of a childrenďż˝ s camp, and later assigned him as a high school chaplain after undergoing treatment for further accusations. The priest eventually pled guilty to sexual abuse of children in Missouri and went to prison.

It also highlights claims that Fr. Patrick Condron admitted to sexually abusing a student but was assigned to a Catholic elementary school after receiving treatment, without parents being notified of his history.

The suit also says that the diocese failed to conduct thorough background checks in hiring employees, and when the diocese became aware of employeesďż˝ histories ďż˝" which included, in at least one case, a conviction for statutory rape ďż˝"  it failed to notify parents about them.

"Parents who pay and entrust the Wheeling-Charleston Diocese and its schools to educate and care for their children deserve full transparency," Attorney General Patrick Morrisey said in a March 19 statement.

"Our investigation reveals a serious need for the Diocese to enact policy changes that will better protect children, just as this lawsuit demonstrates our resolve to pursue every avenue to effectuate change as no one is above the law."

The Diocese of Wheeling-Charleston said some of the information in the lawsuit is based on the diocesan public disclosure of accusations of clerical abuse against minors from last November, as well as other information given to the attorney general by the diocese in recent months.

Some of the alleged misconduct described in the lawsuit took place over half a century ago, and some "are not accurately described," the diocese said, noting that in some cases, reports of alleged occurrences were not made until decades later.

The diocese added that the allegations do not fairly depict the overall contribution of Catholic schools and their employees "who work every day to deliver quality education in West Virginia."

Bishop Bransfield, who is named in the lawsuit, was restricted from ministry last week, following an investigation by Archbishop William Lori of Baltimore, at the request of Pope Francis last September. The pope had accepted Bransfield's resignation and asked Lori to look into allegations of sexual harassment of adults against the bishop.

On March 11, Lori announced that the results of that investigation have been sent to the Holy See, where a final decision about Bransfield will be made. Pending that decision, Lori said, restrictions are being placed on Bransfield's exercise of ministry.

Bransfield had led the Diocese of Wheeling-Charleston since 2005. During the 2012 criminal trial of two other priests in Philadelphia, he was accused of covering up sexual misconduct by other priests, as well as molesting a minor.

Two witnesses and a prosecutor alleged that Bishop Bransfield "may have known about sexual misconduct by [another priest] or abused minors himself," the Philadelphia Inquirer reported.

Bransfield denied these allegations, calling them "completely false," and the alleged victim later came forward to say that he was never abused by Bransfield.