Free World Class Education
FREE Catholic Classes
NARAL's Catholic Strategy has cost our country dearly and it will only get worse.

Catholic Kaine sold out to a slogan and a political party that chants such slogans as justice for all, rise together and women's rights, completely ignores the silent screams from half a million baby girls who are torn apart limb by limb. Tim Kaine ignores the reality that it is hard to teach a young man not to kill his neighbor when he can take his girlfriend down to the neighborhood Planned Parenthood and pay to have his child killed. 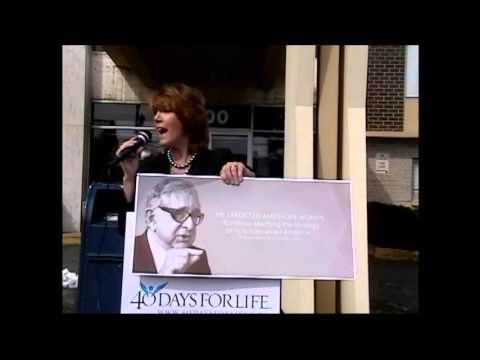 WASHINGTON,DC (Catholic Online) - (Note from the Editor in Chief, Deacon Keith Fournier: St. John Paul II, along with exposing the culture of death and calling for a new culture of life, wrote beautifully on the dignity, gifts and calling of women in his Apostolic Letter On the Dignity of Women. He was fond of a phrase, the "feminine genius". In his Letter to Women he wrote, "The life of the Church in the Third Millennium will certainly not be lacking in new and surprising manifestations of the feminine genius".

I have been in the trenches of the movement to restore recognition of the Right to Life for our youngest neighbors in the womb for decades, as a lawyer, an activist and a minister of the Church. During those years, one of the men who deeply influence my life was my friend, Dr. Bernard Nathanson (Bernie). Bernie and I spoke of many things. One of them was the need for prophetic powerful voices of Pro-Life women to rise up and lead the movement to restore the Right to life.

When I first met Terry Beatley, I immediately recognized that "feminine genius" to which St John Paul referred. Her passionate defense of life and courage is prophetic. Her work is vitally important. I also knew she was one of those powerful voices we discussed.

I am honored to introduce her to the readers of Catholic Online. I highly recommend her soon to be released book entitled "What if We've Been Wrong? Keeping America's Promise to America's "Abortion King"  to all of you. It is a beautiful testimony to Bernie Nathanson which will help to keep not only his vital story but his essential work alive for the next generation of leaders in this human rights struggle. I was honored to write an epilogue for the book and will review it for our readers upon its release.)

Answer: He fails to grasp the violent societal consequences by what has been dubbed "the most brilliant political strategy of all time" according to NARAL's co-founder and first medical director, Dr. Bernard Nathanson.  The doctor admitted to deceiving Americans, especially Catholic voters, and using a ploy to manipulate them to legislatively support a culture of death.

Tim Kaine is guilty of spreading a culture of violence by denying the Right to Life of children in the womb. He also contributes to hiding the Abortion industries' aims of destroying parental rights and exploiting women and children. Tim Kaine needs to connect the dots between Catholic support of legalized abortion and the fallout, public turmoil, violence and destruction of the family unit which it promotes.

In 1969, when Sen. Kaine was just eleven years old, a small cadre of unscrupulous and unprincipled pro-abortion activists operating as a political organization called the National Association for the Repeal of Abortion Laws (today known as NARAL Pro-Choice America) triumphed with an unimaginable, nearly unbelievable, marketing strategy - calling it the "Catholic Strategy."

Most likely, young Tim, who went to Mass nearly every Sunday, did not know a thing about it.  He was probably more interested in shooting his toy gun while playing cops and robbers with local boys in the neighborhood.

NARAL, on the other hand, was striving to overturn New York State's century old anti-abortion law which provided protection for unborn babies. NARAL knew its political victory would require enough Catholic voters to support pro-abortion candidates. There was a problem, though.  Too many New York Catholics had been taught to respect the dignity of all human life.

Dr. Nathanson, though, along with his junta of moral thugs, began their campaign to separate Catholic voters' religious and moral conviction from their legislative judgement. They even gave it a name: the Catholic Strategy.

Second, they would elevate the few Catholic candidates or legislators who were willing to modify the law.

Third, they promoted these candidates in the media, which in turn, made it appear that a major shift had happened in Catholic sentiment on the issue of abortion.

Fourth, they deployed what they called the Catholic "Straddle" - so commonly repeated today from candidates like Tim Kaine. Most Catholics - and Americans in general- don't even know it was a deceptive NARAL slogan which started in the late sixties to relieve Catholic voters of any guilt for supporting pro-abortion candidates. The "catholic straddle" pushes the morally incoherent notion that though abortion is personally abhorrent - every woman has the "right to choose".

Choose what? To kill an unborn child.

For one thousand nine hundred and seventy years, Catholics respected life from womb to natural death. According to Dr. Nathanson, though, NARAL used Catholics - and many pro-abortion Protestants - to unleash the assembly line slaughter of American children.

Catholic Kaine sold out to a slogan and a political party that chants "justice for all," "rise together" and "women's rights," - but then completely ignores the silent screams from half a million baby girls who are torn apart limb by limb.

Tim Kaine ignores the reality that it is hard to teach a young man not to kill his neighbor when he can take his girlfriend down to the neighborhood Planned Parenthood and pay to have his child killed.

Tim Kaine's support of the abortion industry also led to the destruction of parental rights. For example, it promotes judicial bypasses to young girls, allowing them to bypass their parents' knowledge or consent to an abortion surgery.

NARAL's Catholic Strategy has cost our country dearly - and it will only get worse.

Unlike Tim Kaine, Dr. Nathanson allowed science to speak to his conscience. Just a few months after the 1973 Roe v. Wade decision which Dr. Nathanson celebrated, he saw for first time his "other" patient inside the womb on a new technology called real-time ultrasound.

The Abortion King who had persuaded Planned Parenthood to enter the abortion trade and who trained their personnel, became pro-life and eventually repented for his crimes against humanity, his exploitation of women and his campaign of political lies.

No guilt. No shame.

-----
Terry Beatley is the founder and president of the Hosea Initiative, an organization dedicated to educating women about deception in the abortion industry. The Hosea Initiative was inspired by a promise Beatley made to the late Dr. Bernard Nathanson, America's former "abortion king" who deeply regretted co-founding NARAL and ultimately committed himself to pro-life advocacy. She is the author of a soon to be published boo on her life-changing experience with Dr. Bernard Nathanson entitled "What if We've Been Wrong? Keeping America's Promise to America's "Abortion King"