The Christmas Gift: Because Jesus is Born, We Can Be Born Again

Free World Class Education
FREE Catholic Classes
Merry Christmas! Celebrate, laugh, love and share the Good News.Receive the greatest gift and become a gift for others. Because He is born, we can all be born again.

On the day called Christ-Mass, the whole world pauses - at a manger, a crib, a creche. The Nativity of the Lord touches every man, woman and child. The world is presented with the Christian proclamation that the Word became flesh and dwelt among us. The whole world is invited to be begin anew. Love is born on Christmas Morn and the whole world can be Born Again in Him. 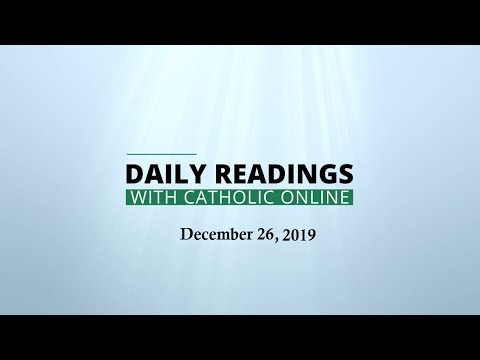 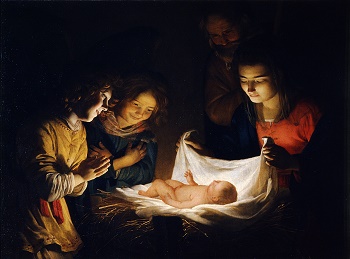 That beautiful Child was born in a manger so that the world can be born again in Him. He became like us, so that we can become like Him. As sons and daughters in the Son, we can live for eternity in an intimate communion of love in, through and with Him. That reality begins today for all who say Yes to the gift being offered. Merry Christmas

TYLER, TX (Catholic Online) - For many Christians, the current approach to Christmas seems to bother them. After all, with all of the commercialism, some say we can miss the meaning and the message of this day. And, I suppose that this is a real possibility. But, in an age which has all but forgotten God, the mere fact that we still give gifts to one another on the day the Christian Church proclaims that the Messiah of the entire world was born reminds me of the tender Mercy of the God who still loves the world so much that He sent His Son.

And, the fact that every effort to stop the mention of the name of Jesus Christ in referring to the holiday or somehow curtail the use of the greeting "Merry Christmas" is met with fierce opposition, gives me hope for the future. The whole world still pauses at the Christmas creche and ponders the meaning of the mystery, for good reason.

The whole world is offered the gift of being born again, of becoming children of God.As the beloved disciple John wrote in the Gospel which bears his name, "to all who received him, who believed in his name, he gave power to become children of God;Â  who were born, not of blood nor of the will of the flesh nor of the will of man, but of God." There is always a new beginning.

There is a loving God, a Father, who is always doing the most loving thing for His sons and daughters. Even those experiences which seemed so painful, and even devastating while we were going through them, all take on new light when we look back in the light of real, living faith. I am inÂ  my sixties now and I can freely say "Thank you God" for it all.Â Â Â Â

Things grow simpler as I grow older. I think that is one of the many graces of aging, it clears away the clutter. The older I get the more I love Christmas, the real Christmas, the Feast of Love Incarnate, in all of its implications and promise. I also rejoice to be alive in this new missionary age of the Christian Church. I draw encouragement from the fact that in an age which seems to have lost the gift of faith, and along with it the ability to perceive mystery, the Feast of the Nativity of the Lord Jesus still captures such attention and evokes such a response.Â

But it does - precisely because of what it truly means; because He is born, we can all be born again.

What Augustine called the restless heart beats in every chest and opens all men and women to eternity. The hunger and thirst so evident among the men and women of this moment discloses a pattern for our evangelistic work in this new missionary age. We are not called to wag our fingers but to open our arms.

We should have as a driving passion of our life that all men and women receive the greatest gift, the child born in the manger. This year I am again deeply moved by the astonishing fact that the Second Person of the Blessed Trinity, the Word through whom the entire universe was made, chose to come among us as a child, a baby.

The Almighty God became vulnerable, even dependent in a sense, revealing the depth of His love in what Pope St. Leo called the condescension of compassion:

I spent precious time in prayer on Christmas Eve morning. I was drawn to some of the memories I forgot I had so close to my heart, the birth of each of our five grown children. One paramount experience came from the recesses of those memories I did not know I still had. It gripped me in the place which the Bible calls the heart, the seat of decision and emotion.

I remember being stunned by how new they were. I marveled at their new little fingers, the newness and tenderness of their skin, and the crystal clarity of color in those wondrous eyes! I recalled the experience of love so evident in their vulnerability. It came back to me, and I wept. I recalled the words of Jesus about becoming children:

Every Christmas we are reminded that we can begin again and again and again. The creche where heaven came to earth is a promise to every man, woman and child. The Gospels proclaimed at the Vigil and the Midnight Mass of Christmas root the Nativity of the Lord, in the family history and lineage of David and tell the story of the Birth of the Savior for a good reason.

They remind us that all of the aspirations, hopes, prophecies and promises of the Old Testament are fulfilled in the birth of this Child, the One named Jesus; born of the Virgin whose name was Mary. The Mass of Christmas day uses the Gospel of St. John to unpack the deep mystery in these words:

"In the beginning was the Word and the Word was with God and the Word was God. He was in the beginning with God; all things were made through Him and without Him was not anything made that was made. In Him was life, and the life was the light of men. The light shines in the darkness and the darkness has not overcome it,.. AND THE WORD BECAME FLESH AND DWELT AMONG US." (John 1)

Johns' Gospel contains the mature reflection of the early Church on the significance of what we celebrate on Christmas.Â  The words rendered in English dwelt among us can be literally translated - He pitched His tent among us. The God of the whole universe who dwelt in inaccessible light, whom no man had ever seen and lived, became a man. He became a vulnerable baby. He became one of us, and made His home with us. He continues to live with us as we live our life in Him.

St. Paul, writing to the Christians in Corinth told them that in Jesus the Christ, God has given us all His greatest YES: "As God is faithful, our word to you is not yes and no. For the Son of God, Jesus Christ, who was proclaimed to you by us, Silvanus and Timothy and me, was not yes and no, but YES has been in him. For however many are the promises of God, their Yes is in him; therefore, the Amen from us also goes through him to God for glory." (2 Corinthians 1:18-20)

The Eternal Word entered time and opened it up to eternity.

The YES of God is now given to the whole world in this newborn King. Love is born on Christmas Morn and in Him the world can begin again. God is more than an idea; more than the summit of all the aspirations of the human heart. He is more than a first mover who got it all started and remains distant. God can be known and wants to be in communion with us. He gives Himself to us. He became a child and invites us to do the same; to be born again.Â

God is love, wrote the beloved Apostle John. (1 John 4:7-9) Love gives Himself away to the beloved and the beloved is transformed.Â

God so loved the world He created out of love - that when it became separated from His Love through sin, He did not stop loving. The all - powerful God who made both heaven and earth became a vulnerable baby and chose to give Himself to His creation in order to create it anew. He sent the Incarnate Word, His Son, through whom He made the universe, as a helpless, dependent and vulnerable child.

He became like us, so that we can become like Him. As sons and daughters in the Son, we can live for eternity in an intimate communion of love in, through and with Him. That reality begins today for all who say Yes to the gift being offered. The separation between the entire human race and the One who fashioned us for Himself has now been bridged. This Child whom we adore is our Redeemer, Our Savior, and Our Deliverer. He is the first born of a new creation. We are born again in Him.

On the day called Christ-Mass, the whole world pauses - at a manger, a crib, a creche. The Nativity of the Lord touches every man, woman and child. The world is presented with the Christian proclamation that the Word became flesh and dwelt among us. The whole world is invited to be begin anew. Love is born on Christmas Morn and the whole world can be Born Again in Him.

Let me conclude with words of invitation from one of the early Fathers of the Church:

"What came about in bodily form in Mary, the fullness of the godhead shining through Christ in the Blessed Virgin, takes place in a similar way in every soul that has been made pure. The Lord does not come in bodily form, for we no longer know Christ according to the flesh, but He dwells in us spiritually and the Father takes up His abode with Him, the Gospel tells us. In this way the child Jesus is born in each of us." (St. Gregory of Nyssa)

Merry Christmas! Celebrate, laugh, love and share the Good News.Receive the greatest gift and become a gift for others. Because He is born, we can be born again.

Deacon Keith A. Fournier is the Editor of Catholic Online, Chaplain of Your Catholic Voice Foundation and Dean of the Catholic Online School. He currently serves as General Legal Counsel and Director of Deacon Formation for the Diocese of Tyler, Texas, which is under the pastoral oversight of Bishop Joseph Strickland. The Deacon also serves as the Dean of Catholic Identity at Bishop Gorman Catholic School in Tyler.Â