Ordinariate of the Chair of St Peter, Catholics nurtured in the Anglican tradition, receives its First Bishop

Free World Class Education
FREE Catholic Classes
The Ordinariate is a key ecumenical venture for the Catholic Church and a concrete example of this unity in diversity. 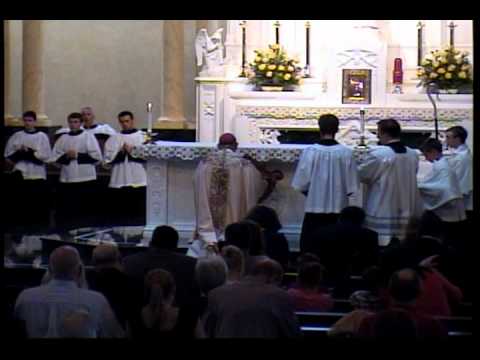 HOUSTON, TEXAS (Catholic Online) - I have committed my life and ministry to responding to the prayer of Jesus, as recorded in the 17th chapter of John's Gospel - "May they be One". In keeping with that life commitment I have written extensively about what is referred to as "the Ordinariate"',

On January 18, 2011, I wrote of the ordination to the Catholic priesthood of three former Anglican Bishops in London's Westminster Cathedral. Those priestly ordinations became the building blocks of this movement now called the Ordinariate. Those priests became the living stones, to borrow inspired language from the letter penned by the Apostle Peter in his explanation of the relational nature of the Church given to the early Christians.

The emergence of the Ordinariates is but one dynamic part of the overall movement toward restoring Christian unity in this Third Christian Millennium. It was unleashed by the prophetic action of Pope Emeritus Benedict XVI when he issued an Apostolic Constitution entitled Anglicanorum Coetibus (On Groups of Anglicans) on November 4, 2009. Those priestly ordinations also led to the establishment of the first Personal Ordinariate called Our Lady of Walsingham.

This Ordinariate movement is often not even known to exist by many Roman Catholics. In my travels for ministry, I often mention it in talks. However, I have found that most Catholics in the pews are sadly, unaware of its existence, let alone its implications. The ordinariate movement has spread across continents.

I also hope that the Personal Ordinariates become missionary platoons for a new missionary age of the Catholic Church. Their members, while maintaining their Anglican patrimony and embracing full communion, are now playing a prophetic role. They show us in this urgent hour that there can be real unity in orthodoxy (right doctrine) and orthopraxy (right practice) within a legitimate Christian diversity.

On January 12, 2012, the Personal Ordinariate of the Chair of St Peter was established for the United States of America. I wrote extensively about it, expressing my enthusiasm for its potential. However, my greatest joy in the birthing of this movement became profoundly personal later that year. Let me explain.

My closest friend, Randolph Sly, was then an Archbishop of the Charismatic Episcopal Church, an office he had held for many years. He and his wife Sandy, after a long period of discernment, had acknowledged their hunger for unity. They chose to come into the full communion with the Catholic Church.

In an inspiring act of sincere and living faith, then Archbishop Randy laid aside his office. He and his beloved wife also laid aside the security which had been a part of their life together. There was no expectation of ministerial ordination. Randy Sly and I had worked together in ecumenical ministry for years.

Along with my friend Father James Kauffmann, I had the privilege of catechizing Randy and his wife Sandy in the Catholic faith. I later served as a Deacon at the Mass of their reception into the full communion of the Catholic Church. Randy's love for Jesus Christ and his hunger for the fullness of Christian faith was, and continues to be, a great inspiration to me personally.

As he progressed in his life as a Catholic, and after he had lived as a Catholic layman in ministry, the sense of a call continued in his heart. In a sincere effort to discern whether there was a specific vocational call -  Randy Sly submitted his name for consideration for priestly ordination after the Personal Ordinariate of the Chair of St Peter was erected in the United States. He was accepted.

I had the privilege of vesting him when he received the first order as a Deacon. I was also present at his priestly ordination on June 23, 2012. It was a moving and prophetic Liturgy. I grew even more convinced during that ordination service that the prayer of Jesus, recorded in the seventeenth chapter of John's Gospel, "May They Be One!" is being answered in our day. It is happening in many different ways, and the Ordinariates are one.

I remember weeping like a baby throughout that liturgy. I couldn't hold back the tears. I offered them them to the Lord, in gratitude for His fidelity to this good  man who had sacrificed so much to live in the heart of the Catholic Church. They were also tears of joy - for the Church I love. I knew she would be richly enhanced by his priestly ministry.

Finally, they were tears of brotherly affection and celebration. I had the privilege of being Father Randy's friend and helper on he and his wife's journey home to the full communion of the Catholic Church. I acted as a road-sign as they made the way, being pulled along by the Splendor of Truth and responding to the invitations of grace.

Father Randy has served since the day of his ordination as a Catholic Priest of the Ordinariate of the Chair of St Peter. He has done so with true holiness and an infectious love for the Lord. Many will attest to the beauty of his priesthood. I am one. I always sensed he had a priestly soul and I was thrilled when the vocation was discerned by the Church.

The Ordinariate explains its special identity in the Catholic Church on its web site in these words "The Personal Ordinariate of the Chair of St. Peter is equivalent to a diocese for Roman Catholics who were nurtured in the Anglican tradition. The Ordinariate was created by the Vatican on Jan. 1, 2012."

In discussing its role as a part of the whole Catholic Church, the explanation continues, "Members of the Ordinariate are fully Roman Catholic, while retaining elements of Anglican heritage in their celebration of liturgy and in the hospitality and ministries of their Catholic communities.  Based in Houston, Texas, the Ordinariate has more than 40 Roman Catholic parishes and communities across the United States and Canada."

On November 24, 2015. Pope Francis announced the appointment of the first Bishop of the Ordinariate of the Chair of St Peter, Rev. Msgr. Steven J. Lopes. The full press release can be found here. In that release there is an explanation of the historic movement toward recovering the full communion of the Church manifested by the Ordinariates:

"Pope Benedict's vision for Christian unity and the concrete ways that Pope Francis is implementing that vision demonstrate that unity in faith allows for a vibrant diversity in the expression of that faith. The Ordinariate is a key ecumenical venture for the Catholic Church and a concrete example of this unity in diversity."

The prayer of Jesus is being answered - the Holy Spirit is truly at work.  May We Be One, so the world may believe!

Deacon Keith A. Fournier is Founder and Chairman of Common Good Foundation and Common Good Alliance. A married Roman Catholic Deacon of the Diocese of Richmond, Virginia, he and his wife Laurine have five grown children and seven grandchildren, He is a constitutional lawyer and public policy advocate who served as the first and founding Executive Director of the American Center for Law and Justice in the nineteen nineties. He has long been active at the intersection of faith, values and culture.He currently serves as Special Counsel to Liberty Counsel.