In light of the upcoming Clint Eastwood movie "American Sniper," which is based on the autobiography of the late Navy SEAL sniper Chris Kyle, I'm republishing a February 2013 interview I did with noted priest-author-theologian Father John Trigilio Jr., president of the Confraternity of Catholic Clergy.- Matt C. Abbott 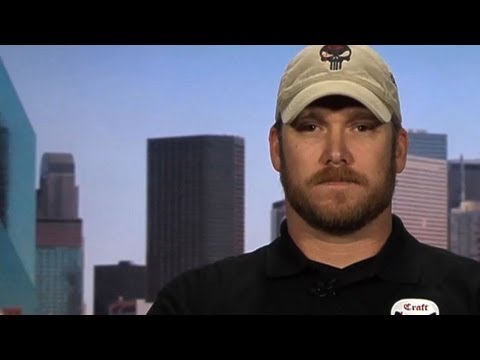 CHICAGO,IL (Catholic Online) - (Note from the Editor in Chief: We offer this guest opinion with full knowledge that there will be disagreement among some of our readers as to the analysis offered. Our publishing the interview does not necessarily indicate agreement with the analysis. We would also welcome alternative analysis which is as intelligently and sincerely written as that which is offered by Father John Trigilio in this interview. We live in a serious time of crisis which calls for a serious analysis of such moral issues moving forward.)

Matt C. Abbott: In light of the upcoming Clint Eastwood movie "American Sniper," which is based on the autobiography of the late Navy SEAL sniper Chris Kyle - and is the subject of a Dec. 22 Catholic Online news story  - I'm republishing a February 2013 interview I did with noted priest-author-theologian Father John Trigilio Jr., president of the Confraternity of Catholic Clergy. The interview first appeared at RenewAmerica.com shortly after Kyle's death.

Father John Trigilio: Former U.S. Navy SEAL Chris Kyle was tragically murdered. He, however, did not murder anyone even though he killed (confirmed) 160 people during his military service. Those targets were valid military objectives. Morally speaking, Kyle was like any other sailor, soldier, airman, or marine in that they officially defend and protect our nation from all enemies, foreign and domestic.

Unjust aggressors, particularly those classified as combatants, can be either military or civilian. They are legitimate targets, whether it be a drone or sniper, one soldier or a platoon. Military snipers are not hit-men as in the case of the mob. Snipers are not seeking revenge; they are doing their duty as members of the armed forces defending their nation. What distinguishes them from other soldiers is that the sniper has one particular target, whereas the rest of the troops have a broader objective, usually the capture of a particular location or a disabling of a military installation.

The natural moral law and the just war doctrine make it clear that all military personnel are obligated to distinguish combatants from non-combatants. Formerly, the distinction was between military and civilian. The former are valid targets; the latter are exempt. Since modern times and guerrilla warfare tactics, civilians have armed themselves in many places; and when dealing with terrorists like al Qaeda, anyone of either gender and any age who bears a weapon (gun or explosive) is now a legitimate target.

Deadly force is not always the proper solution and should be a last resort; however, when a known person who is guilty of unjust deaths, murders, tortures and other atrocities and most likely will continue, or worse, escalate the violence with others, then they become a target for a sniper.

Chris Kyle was an American hero. While we do not rejoice that 160 people were killed, we are grateful that 160 unjust aggressors and enemies of our country were neutralized. Military and police are required to use proportionate force in repelling or stopping the enemy. That means, if possible, enemy troops should be able to surrender, or if they refuse, better to non-lethally wound than to kill. Obviously, in heat of battle, that may not always be possible. Snipers have very precise targets while the average soldier is concerned with any and all combatant (armed) enemies, whether in uniform or not.

Count Claus von Stauffenberg, who attempted to assassinate Adolf Hitler, was doing precisely the same thing as Chris Kyle in that both sought to eliminate a specific target in order to save many more lives. John of Saxony developed criteria for tyrannicide, whereby those in the military may assassinate a true tyrant or terrorist (e.g., Hitler, Stalin, bin Laden, etc.) Like the state executioner who implements capital punishment, it is generally held that they are not culpable of unjust killing, whereas the judge and/or jury who impose the death penalty might be if the decision was not morally determined. Police or military snipers must be authorized by legitimate authority and their targets must be specific. The moral criteria upon which a target is chosen falls upon the superior(s) who select(s) the person to the sniper for his mission.

It is sad irony that Chris Kyle was killed not by enemy combatants, but by a mentally-disturbed fellow countryman. Not friendly fire, so to speak, but Kyle was doing what he had been doing since leaving the Navy, i.e., helping veterans who showed signs of battle-fatigue (Delayed Stress Syndrome). Here he was trying to help his assailant and instead became an innocent victim of senseless violence. He deserves a hero's funeral and to be given full honors.

Not every soldier can be a sniper. Besides the training and ability needed, one must also have the stamina and strength to kill someone by name as most in the military, when in battle, know the enemy only by uniform. Snipers, therefore, are an extraordinary element of a just war; the overwhelming majority of troops will be the ordinary means. Saddam Hussein was able to be captured; Osama bin Laden was not. Circumstances and situations change with fluidity during operations of war or counter-terrorism.

Former Navy SEAL Kyle saved many lives by eliminating those who would have inflicted far more innocent and unjust injuries and casualties.

Matt C. Abbott is a Catholic commentator with a Bachelor of Arts degree in Communication, Media and Theatre from Northeastern Illinois University. He has been interviewed on MSNBC, NPR and WLS-TV in Chicago, and has been quoted in The New York Times and the Chicago Tribune. He can be reached at mattcabbott@gmail.com.