The Canonizations, the Council and the Hermeneutic of Continuity

Free World Class Education
FREE Catholic Classes
By canonizing the one who convened of the Second Vatican Council and one of its most important contributors, Pope Francis sent a signal of continuity.

A hermeneutic is a lens through which we view or interpret something of importance. In discussing the Second Vatican Council much has been made about the difference between those who view that Council and its teaching through either a hermeneutic of continuity, seeing proper reform in light of that continuity, or a hermeneutic of rupture. In other words, was the Council a break with past teaching, something entirely new, or was it a continuation, a freshening, of the trajectory of the truth as taught by the Church from its beginnings? 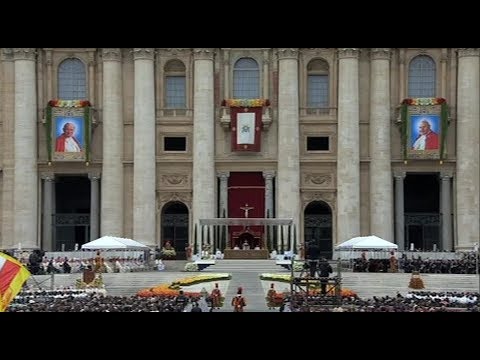 The event was profoundly important on so many levels. One of those levels concerns what it affirmed. By canonizing the one who convened of the Second Vatican Council and one of its most important contributors, Pope Francis sent a signal of continuity.

He also affirmed that the gift of the Second Vatican Council, as well as its promise of authentic renewal, have both only just begun to be understood, unpacked and implemented.

Of course, that means the real Second Vatican Council - and not the misinterpretations which often coast along under the guise of phrases, such as the spirit of the Council - used by some with agendas quite at odds with the Council, to confuse the faithful.

We need to be cautious when we hear such phrases. Let me give one example.

In 2012, I attended a forum where a theology Professor gave an address on Vatican II to a group of Deacons. It was meant to be a tribute, in light of the Councils' fiftieth anniversary, to the importance of the Council.

Many of his thoughts were insightful and well presented. However, in the question and answer session which followed his talk, something emerged which points to the serious challenge faced by the Catholic Church as she engages both her mission of the New Evangelization (ad intra) as well as her task of leading a new missionary age (ad extra).

I use the Latin terms for "from within" (ad intra) and "from without" (ad extra) intentionally. Such phrases often accompany theological discourse and debate. The question and answer session following the talk was no exception.  What became clear was that terms - and what one means by them - really do matter.

The term "New Evangelization" was coined by St. John Paul II and embraced as a foundation for the pastoral work of Pope Benedict XVI. Now, under Francis, it has become one of the primary pastoral initiatives of the whole Church.

It refers, among other things, to the evangelistic and catechetical work so desperately needed within the whole Catholic Church.

It acknowledges the fact that many people in the pews need to encounter the Risen Lord Jesus Christ. They then need to hear the fullness of the Gospel as taught authentically and authoritatively by the teaching office (the magisterium) of the Catholic Church. Finally, they need to embrace that teaching in a way which is reflected in a unity of life.

Sadly, we must acknowledge that there are sacramentalized Catholics who have not been evangelized. Further, there are Catholics who do not really know what their own Church teaches. Much of our catechesis - instruction in the faith- since the Second Vatican Council - has been inadequate.

Thus, the Catholic Church has committed its resources to reawakening the faithful through an encounter with the Risen Jesus Christ. Further, the Church seeks to re-evangelize and re-catechize the faithful so that that they can consciously choose to live their lives as Catholic Christians in the heart of the Church for the sake of the world into which they have been sent on mission.

I regularly use the phrase "New Missionary Age" to refer to the unchangeable task of the Catholic Church, through her members, to bring the whole world into a saving knowledge of Jesus Christ. That is to lead to incorporation into the Church, which is His Body.

The Declaration of the Congregation for the Doctrine of the Faith issued in 2000 and entitled "Dominus Iesus: On the Unicity and Salvific Universality of Jesus Christ and the Church"
stated this with simple clarity. Here is just one sentence:

It must therefore be firmly believed as a truth of Catholic faith that the universal salvific will of the One and Triune God is offered and accomplished once for all in the mystery of the incarnation, death, and resurrection of the Son of God.

The Prefect of that Congregation, the author of this document, was Joseph Cardinal Ratzinger. He is now Pope Emeritus Benedict XVI. His continual reminders to the faithful of the missionary vocation of the Church "ad extra" was a hallmark of his papal Magisterium. It has continued under the service of his friend and beloved successor, Francis.

The speaker and I had an interesting discussion concerning the importance of that letter and what it really says. We strongly disagreed.I want to zero in on another term he used, this one was an Italian word.

The speaker enthusiastically used the Italian term "aggiornamento" when referring the Second Vatican Council. The word was used by St. John XXIII as he charged the Council Fathers in their important work.

Loosely translated, the word means to bring something up to date. We would both agree on that as one of the tasks of the Council. .

However, as to what that term means as it relates to the teaching of that Council in the light of the two millennia of the Church history - and its relationship to the teachings of past Councils - now that is where our discussion revealed a strong disagreement.

It also led to a lively discussion and debate.

This all relates to another theological term, "hermeneutic". A hermeneutic is a lens through which we view or interpret something of importance. In discussing the Second Vatican Council much has been made about the difference between those who view that Council and its teaching through either a hermeneutic of continuity, seeing proper reform in light of that continuity, or a hermeneutic of rupture.

In other words, was the Council a break with past teaching, something entirely new, or was it a continuation, a freshening, of the trajectory of the truth as taught by the Church from its beginnings?

Clearly, on many issues related to this hermeneutic the speaker and I held very different positions. It became even more clear as specific" hot button" issues began to be discussed in that forum.

There is one final word which came up in that encounter. This one a French word, ressourcement. It means a return to the sources. I told my colleague that I believed that the Second Vatican Council, as properly understood, should also be seen as a return to the sources - the Scriptures, the Patristic writings (writings of the early Church fathers) and past Councils - in order to update the trajectory of truth.

I offered an opinion that the task of a contemporary Catholic theologian is beautifully explained in a passage from Matthew's Gospel, "Therefore every scribe who has been trained for the kingdom of heaven is like a householder who brings out of his treasure what is new and what is old."   (Matt. 13:52)

Well, my colleague and I had a punchy discussion. He views himself as a "progressive" and apparently viewed me, his interlocutor, as what he called a "traditionalist".

I told him I prefer the noun Catholic without any descriptive labels. I am not a traditionalist though I do love the Tradition. I added that if he wanted to use adjectives, he could just call me a dynamically orthodox, happy to be Catholic, Catholic.

I thought of the speaker months later when I read comments given by then Archbishop Gerhard Ludwig Müller, the Prefect of the Congregation for the Doctrine of the Faith.

He was appointed by Pope Emeritus Benedict XVI to this important post, to the chagrin of some traditionalists and the disappointment of some self styled progressivists. His appointment proved to be one more confirmation of the wisdom of this Pope.

Pope Francis not only continued him in this position but made him a Cardinal in February of 2014.

The Cardinal gave some insightful remarks  upon the presentation of Volume VII of the German edition of Joseph Ratzinger's Opera Omnia, a systematic theological collection of the works the now Pope Emeritus Benedict XVI has written on the meaning of the Second Vatican Council.

I hope my colleague has read this address. The Prefect suggested an interesting connection between some "progressivists" and some "traditionalists".

Rather than just give my own interpretation of his remarks, I offer a quote from Gianna Valente's article on the presentation in the November 30, 2012 edition of La Stampa entitled "The custodian of faith on the "heretical interpretations" of the Council" to conclude:

During his presentation, the head of the doctrinal dicastery, clearly stated that the only orthodox interpretation of the Second Vatican Council is that which sees it as an opportunity for reform and renewal, in continuity with the one subject-Church which the Lord has given us.

Müller sees this as the only hermeneutics that respects "the indissoluble unity between the Holy Scriptures, the complete and integral Tradition and the Magisterium, which finds its highest expression in the Council, presided over by St. Peter's Successor, as visible head of the Church."

Archbishop Müller contrasted this "singular orthodox interpretation" with a "heretical interpretation" which he identified with "the hermeneutics of a split, both on the progressivist front and the traditionalist front."

According to Müller, what they both share in common is a rejection of the Council: "progressivists want to leave it behind them, as if it were just a phase that should be abandoned in order to move towards a different Church; traditionalists do not want to move towards such a Church, as if it represented the winter of the Catholica."