Pope Francis and the Role of Women in the Church

It is in dialogue with God, enlightened by prayer, that the Christian woman continually searches to answer the Lord's call, in the reality of her situation. This is a prayer that is always supported by the maternal presence of Mary. She, who cared for her divine Son, who propitiated his first miracle at the wedding at Cana, who was present on Calvary and at the Pentecost, shows you the road to take to deepen the meaning and role of women in society and to be fully faithful to the Lord Jesus Christ and to your mission in the world.- Pope Francis 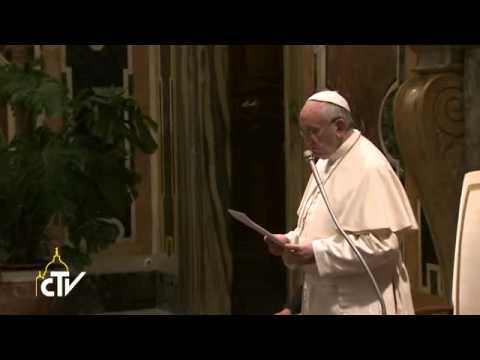 CHICAGO,IL (Catholic Online) - "I too have considered the indispensable contribution of women in society . I have rejoiced in seeing many women sharing some pastoral responsibility with priests in accompanying people, families and groups, as in theological reflection, and I have expressed my hope that greater room can be made for a more capillary and incisive female presence in the Church.

"If in the world of work and in the public sphere a more incisive contribution by the female gender is important, then this contribution also remains indispensable within the domain of the family, which for Christians is not simply a private space, but rather that 'domestic Church' whose health and prosperity is a condition for the health and prosperity of the Church of society itself. At this point it is natural to ask: How is it possible for women to increase their effective presence in many contexts within the public sphere, in the world of work and in places where the most important decisions are made, and at the same time maintaining their presence and preferential and entirely special attention in and for the family? Here it is the field of discernment that, aside from reflection on the reality of women in society, presupposes assiduous and persistent prayer.

"It is in dialogue with God, enlightened by prayer, that the Christian woman continually searches to answer the Lord's call, in the reality of her situation. This is a prayer that is always supported by the maternal presence of Mary. She, who cared for her divine Son, who propitiated his first miracle at the wedding at Cana, who was present on Calvary and at the Pentecost, shows you the road to take to deepen the meaning and role of women in society and to be fully faithful to the Lord Jesus Christ and to your mission in the world."

Catholic convert Dawn Eden, author of My Peace I Give You: Healing Sexual Wounds with the Help of the Saints, wrote in an email:

"I read and reread the pope's comments and don't see anything different than what he has already said about the Church's need for a 'theology of the woman' and about the need for women to have a stronger presence in the Church without being clericalized. Francis' use of the word 'incisive' to describe the kind of presence he wants women to have is really no different from the kind of presence he wants every Catholic to have. It is of a piece with his saying at World Youth Day, 'I want the noise to go out, I want the Church to go out onto the streets, I want us to resist everything worldly, everything static, everything comfortable, everything to do with clericalism, everything that might make us closed in on ourselves.'

Although Francis' tone is characteristically direct, the desire he expresses for vibrant and courageous lay engagement in the Church's mission is really not that different from what the Church has been saying about the New Evangelization since Paul VI called for it in 1975, when he wrote, 'Modern man listens more willingly to witnesses than to teachers, and if he does listen to teachers, it is because they are witnesses'.... It is therefore primarily by her conduct and by her life that the Church will evangelize the world, in other words, by her living witness of fidelity to the Lord Jesus-the witness of poverty and detachment, of freedom in the face of the powers of this world, in short, the witness of sanctity."

Monica Migliorino Miller, founder and director of Citizens for a Pro-Life Society  and associate professor of theology at Madonna University in Michigan, wrote in an email:

The pope certainly knows, beginning with Mary, the Mother of God, that women have been absolutely essential to the covenant of salvation; and while they may not be ordained priests, who image to the Church the love of Christ the Bridegroom to His people, women are the sign of the Church herself. It is important that Catholics begin to understand that role of women more deeply. This is what I have done in my own published works: Sexuality and Authority in the Catholic Church and The Authority of Women in the Catholic Church. As a woman theologian, the pope may benefit from these contributions as he seeks to articulate that new theology of women.

"Until Pope Francis becomes more specific as to how he would go about wanting women to take on a role that is 'more capillary and incisive' in the Church, we can only assume that he understands fully the great contributions women have already made in the history of the Church.  We know there are feminist movements within the Church that lobby for gaining more power for women-equal to that of the hierarchy-and push for the ordination of women. That will never happen.

"Mother Teresa . is quoted as saying: 'I don't think Our Lord has chosen a woman to be a priest because nobody could have been a better priest than Our Lady, and yet, she remained only the handmaid of the Lord.' Is the pope referring to some plan to expand more power to women, or is he planning more areas of service for women? We can only speculate until his blueprint is on the table."

Also on the topic of women in the Church, Helen M. Alvaré, associate professor of law at George Mason University, wrote in the introduction to the 2012 book Breaking Through: Catholic Women Speak for Themselves (which she edited for Our Sunday Visitor):

".Vast numbers of people have made up their minds about all sorts of things pertaining to the Catholic Church without reading or listening to actual Catholic sources. This is ridiculously true when the subject turns to women in the Catholic Church. Observers can't seem to decide whether Catholic women are mouthpieces for a celibate male hierarchy, unthinkingly clinging to home and hearth, or card-carrying feminists who, if they knew what was good for them, would leave the Church, shaking its ancient dust off their sneakers, or pumps, or whatever-the-hell shoes they felt like wearing that day.

"On the positive side, the amount of ink devoted to Catholic women indicates that we are doing something possibly fascinating and likely countercultural. Peggy Noonan, writing about the avalanche of press attention to the death of Pope John Paul II, observed a similar phenomenon. Everyone, she wrote, seemed to feel entitled to express an opinion about Pope John Paul, as if he were some kind of public property. She found this reassuring, confirming the Catholic Church's claim and call to be 'catholic'/universal. Apparently the public-even if only dimly-perceives this.

"The same is apparently true regarding the Catholic woman. Maybe it's because our Church still boasts thousands of women who take vows of poverty, chastity, and obedience-and like it. Maybe it's our long (pre-feminist) tradition of women running major institutions such as universities, hospitals, and social services-and doing it without a lot of blather about 'striking blows' for women's equality. Their focus has rather been in the nature of 'servant leadership' and serving the least among us.

Maybe it's because one is just as likely to see a Catholic woman praying at a nuclear-test site or a prison as at an abortion facility, or to see her working at a university as in her home or her own business. Undoubtedly it is due in part to so many Catholic women's refusals to buckle under the reigning ideology that the sexual revolution-particularly its divorcing of sex from babies-is an unmitigated good, or even the sine qua non of women's equality. This, in particular, seems to drive a lot of people crazy.."
-----
Matt C. Abbott is a Catholic journalist with a Bachelor of Arts degree in Communication, Media and Theatre from Northeastern Illinois University. He has been interviewed on MSNBC, NPR and WLS-TV in Chicago, and has been quoted in The New York Times and the Chicago Tribune. He can be reached at mattcabbott@gmail.com.