The world needs a new evangelization! The people of our city, our nation and our continent are waiting for the encounter with Jesus Christ who makes all things new. In every age, Jesus draws near to offer his salvation to all people. He calls: "Behold, I stand at the door and knock!" 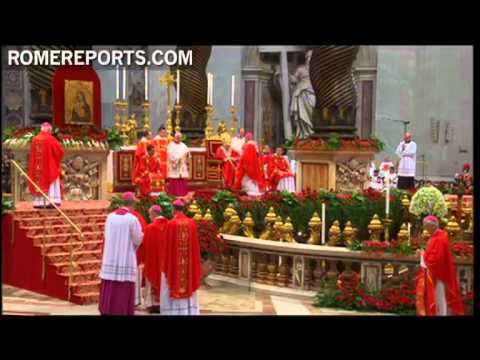 P>LOS ANGELES, CA. (Catholic Online) - Readers of Catholic Online know the admiration I have for the Archbishop of Los Angeles, California, Jose H. Gomez. I have followed his service to the Lord and the Church for years, long before he assumed the Office in Los Angeles. I  refer to him as a "New Evangelization" Bishop. He has a deep and infectious love for the Lord Jesus Christ which is expressed in his pastoral warmth, clear teaching, dynamic orthodoxy and courage in standing firm for the truth.

The Archbishop is a man of genuine prayer who possesses a deep love for the Liturgy. This flows directly from his vibrant relationship of communion with the Lord and his priestly soul. His insights on the Revisions to the Roman Missal were among the finest offered last year. I wrote about them in an article entitled We Become What We Pray: Archbishop Gomez and the Revised Roman Missal Through his excellent teaching, the Archbishop helped many to understand the importance of these revisions when they were still generating controversy.

The fruit of the Revisions is now evident everywhere. The water level of our Liturgical worship has deepened and the beauty and uniqueness of the Eucharistic Liturgy has been re-secured. Good Bishops like Archbishop Gomez are gifts for the whole church. His instruction on the meaning of the Revisions helped thousands beyond his Diocese to seize the moment as an invitation to recover our Catholic identity and respond to the call to a deeper experience of the beauty of liturgical worship.

His teaching on the complex and often charged questions arising out of immigration also revealed a wisdom which is desperately needed in the United States. I wrote an article entitled Archbishop Gomez Addresses Immigration with Prophetic Insight and Clarity.  I called particular attention to his vital insight into how we must approach all public policy issues first, last and all in between, as Catholics, and not with limiting political labels. The Archbishop did a brilliant job of presenting the Social teaching of the Church and placing immigration within the context of the New Evangelization.

Archbishop Gomez is also a passionate advocate for the poor. He teaches the authentic Social Doctrine of the Catholic Church. His 2011 address to the Napa Institute entitled "Immigration and the "Next America": Perspectives from Our History"  should be read by anyone who seeks to inform their political, cultural, social and economic participation in fulfilling our obligation to faithful citizenship, informed by the truth as taught by the Catholic Church.

This Bishop of the New Evangelization has just issued his first pastoral letter since assuming responsibility for the faithful of the Archdiocese of the Angels, Los Angeles, California. He released it on the Feast of the Guardian Angels, October 2, 2012. He begins  with this enthusiastic proclamation:

"The world needs a new evangelization! The people of our city, our nation and our continent are waiting for the encounter with Jesus Christ who makes all things new. In every age, Jesus draws near to offer his salvation to all people. He calls: "Behold, I stand at the door and knock!" Jesus invites men and women to follow him and seek the Kingdom of God. He calls them to live as God's children in his family, the Catholic Church."

In this letter, Archbishop José H. Gomez has called the Archdiocese of Los Angeles to lead a "new evangelization" of the Americas. He writes, "The men and women of our time need someone to show them the way to Jesus. .They need someone to help open up the door of faith for them. They are waiting for us," he writes in "Witness to the New World of Faith."

The 5,000-word letter was issued to coincide with the start of the "Year of Faith" declared by Pope Benedict XVI. Archbishop Gomez is in Rome where he is taking part in a month-long meeting of the world's bishops called by Pope Benedict to discuss the Church's mission in a time of growing secularism and indifference to religion.

Archbishop Gomez was one of 35 persons selected personally by the Pope to serve as a full member of the Synod of Bishops on "New Evangelization for the Transmission of the Christian Faith," currently underway at the Vatican. In his new letter, the Archbishop acknowledges that many people today "are losing their awareness of God's presence in the world and in their lives."

"Our world will return to God only by way of witnesses," he writes, "by way of men and women who testify by the example of their lives that Jesus Christ is real and that his Gospel is the path to true happiness."  He  calls on Los Angeles Catholics to use this Year of Faith as "a time of interior renewal and spiritual preparation for a new Christian witness to our city and our continent."

Archbishop Gomez outlines five pastoral priorities for the Year of Faith and the years that follow. These include: education in the faith, promoting priestly and religious vocations, fostering Catholic identity and diversity, promoting a "culture of life," and strengthening marriage and the family in the face of "widespread cultural confusion."

He writes: "This Year of Faith should be a time in which we examine every area of pastoral life in our great Archdiocese. . We need to ask ourselves: Is our work leading men and women to Jesus Christ and his Church? Is the Christian faith spreading and is knowledge of the faith deepening through our programs and ministries?"

Archbishop Gomez's Letter to the more than five million Catholic faithful in the Archdiocese of Los Angeles (Los Angeles, Ventura and Santa Barbara Counties), like his other letters mentioned above, deserves to be circulated well beyond his current assignment, Los Angeles. It is just too good and must be shared.

In the first centuries of the Church, the letters of Bishops were "circulated" among the faithful. In fact, that is where the term "encyclical" comes from. Archbishop Gomez has urged Catholics to use the Year of Faith as a time to renew their love for Jesus Christ; to delve more deeply into prayer and Scripture; and to study and internalize the teachings of the Catholic Church. His letter deserves to be circulated.

He expresses his conviction it is an encounter with the Risen Jesus Christ which will prepare Catholics to embark on a "new Christian witness to our city and our continent" - and he is absolutely correct. He invokes the example of "America's first missionaries," Franciscan friars like Blessed Junipero Serra, who established the California Missions. We are living in a new missionary age and his analogy is spot on.

Archbishop Gomez encourages Catholics to rediscover their zeal for and commitment to the missionary work of spreading the Gospel to every corner of the archdiocese and world. The Archbishop writes "Our world will return to God only by way of witnesses, by way of men and women who testify by the example of their lives that Jesus Christ is real and that his Gospel is the path to true happiness."

The Archbishop has established a new Archdiocesan Office of the New Evangelization, "responsible for establishing and coordinating our initiatives to spread the Gospel and to increase Catholics' knowledge and love of their faith." He also announced that the Archdiocesan Office of Justice and Peace for Los Angeles would now be known as the Office of Life, Justice and Peace, "to include within its mission the work of defending innocent life against the threats of abortion and euthanasia."

Archbishop Gomez's Pastoral Letter was published in the Oct. 12 edition of The Tidings, the newspaper of the Archdiocese of Los Angeles. It is available online here along with excellent resources for the Year of Faith and other New Evangelization efforts. It will soon be available in E-book format. It can be downloaded in PDF Format here. Prayerfully read it, read it again, and then give it away and live it!