Seeds of the Ordinariate, Part Two: St. Therese Little Flower Parish, the Best of Both Worlds 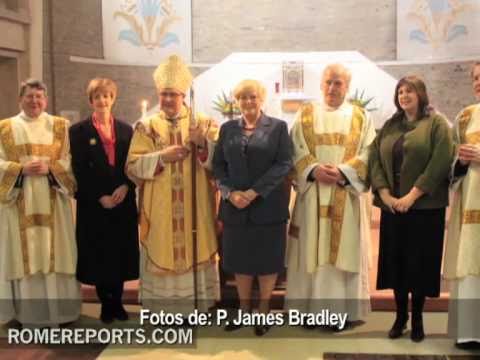 WASHINGTON, DC (Catholic Online) - St. Therese Little Flower Parish is an amazing parish in the Blue Hills area of urban Kansas City, MO. Founded in 1925, the same year their patron saint was canonized, its stone edifice symbolized a sense of permanence in the neighborhood that has endured a great deal of change.

When I lived in the KC area, I remember driving by this building many times, impressed by the strength and simplicity of the architecture. On one particular occasion, I was even more impacted by the smiling faces of the people I saw leaving after Mass. It was a lasting image. The congregation is culturally diverse and I remembered thinking about the old lyric - "red and yellow, black and white; they are precious in His sight."

St. Therese parish describes themselves as a small Roman Catholic Church with a big heart. "We are a very faith-filled, diverse, spirit-led community that is small enough to be a very intimate and close knit family, yet large enough to accomplish the task of serving our brothers and sisters in the community who are less fortunate than we are."

The parish does more than just talk about diversity; they live it. Their 9:15am service, for example, has its roots in an African-American spirituality, filled with exuberance, excitement and some gospel music. Then, at 11:15am, they offer an Anglican Use Mass using the Book of Divine Worship, an approved Roman Rite adapted from the Anglican Book of Common Prayer.

The current pastoral administrator of the parish is Father Ernie Davis, a former Episcopal priest who converted and entered the Catholic priesthood through the Pastoral Provision in 2002. His background in Anglicanism forms the basis for the rest of the story.

It was June, 2008 when a small group of Anglicans and Episcopalians contacted Fr. Ernie, interested in becoming Catholic. They came to St. Therese knowing that, with 15 years' experience as an Episcopal priest, he would understand their situation and be able to assist them in their journey to full communion.

On Christ the King Sunday in 2008, the group was received into the Catholic Church. The following Sunday - the First Sunday of Advent - with the approval of Bishop Finn, the diocesan bishop, and Archbishop Myers, head of the Pastoral Provision in the U.S., the first Anglican Use Mass was celebrated at the parish.

I first met Fr. Ernie in the early 90's when we had lunch together in Independence, MO - two from the Episcopal Church, Fr. Ernie with another ECUSA priest and two of us from the CEC. The one thing we all seemed to have in common in those days is that we were on a journey and God was in charge.

I left the greater Kansas City area in 1998 and lost track of Fr. Ernie until my own conversion in 2006. At that time, I heard of the work he was doing and re-connected with him, updating him on my personal pilgrimage into the Church.

Since that time he has also kept me on his distribution list for news regarding St. Therese and other developments. Through his emails it was clear that Fr. Ernie is truly enthusiastic about the upcoming Ordinariate. In fact, just ten months ago, he and the parishioners at St. Therese hosted the "Becoming One" Conference for Anglicans interested in knowing more about the anticipated Ordinariate.

Approximately 80 people, nearly half of them rectors from Anglican denominations, attended the conference. In addition to local attendees, conferees came from Iowa, Nebraska, Kansas, Arkansas, Illinois and Missouri.

The purpose of the conference was to discuss the Ordinariate and learn more about the invitation from the Holy Father initiated through the 2009 Vatican document, "Anglicanorum Coetibus." Fr. Chris Phillips, a pastoral provision Catholic Priest since 1983, Bishop David Moyer of the Traditional Anglican Church and Bishop Finn of the Diocese of Kansas City-St. Joseph were among those present.

In a recent article written for the new blog PraytheMass.org, Fr. Ernie talked about the challenges that will be faced by those entering the Ordinariate. For those seeking to enter the Church, he cautions that they must not enter as "Anglicans in exile" but embrace their new Catholicity while incorporating their patrimony.

He writes, "I am trying to imagine how those Anglicans who have asked for unity must be feeling right now. If I can remember correctly, as an Episcopalian, I imagined unity with Rome as a kind of covering Rome would throw over the Anglican Communion, offering legitimacy, blessing, collegiality, and support for the Anglo-Catholic interpretation of Anglicanism, without being intrusive.

He also exhorts Catholics to be patient and understanding with these new converts as they enter, recognizing the sacrifices being made.

"I hope my fellow Catholics will not be dismissive of such reactions. I think it is absolutely necessary for Anglicans to wrestle with real issues and express the emotions related to them. (Blessed John Henry) Newman's entry into the Catholic Church did not happen in one day. Nor did he just think himself through the process, although thinking was absolutely necessary. Newman helps us realize that we reason not only mentally, but physically, emotionally and socially as well. If we try to shut down the process and demand instant gratitude for a gracious offer, then we demean those for whom this is almost a life and death issue involving one's core identity.

"To be helpful to our Anglican sisters and brothers, Catholics should recognize that Anglicans are faced with huge sacrifices. To take up Rome's offer, Anglicans are asked to trust the unfamiliar, to put more of a premium on hope than on their past, to be able to state with conviction they believe all the Catholic Church teaches, and to define themselves more as a people who are for something than against something.

"To become Catholic they will have to give up participating in the sacraments until they are prepared to make professions of faith as Catholics, and for Anglicans in irregular marriages, to forego the sacraments and enter the Catholic annulment process for a ruling on the status of their marriages.

"Anglican clergy, especially the TAC clergy who may not have seminary educations, are being asked to give up their ministries for what may be an extended period.

"If they are married, petitions still have to go to Rome and the Ordinariate will have to demonstrate that there is a need for their ministry. Some Anglicans may know right now, intuitively, that they are ready to cross the bridge. But I imagine that for most, especially here in the U.S., it will take some time.

"As Anglicanorum Coetibus states, the Holy Spirit moved groups of Anglicans to petition for unity. The Holy Spirit is the principle of unity, establishing the Church as a communion. The Holy Spirit has brought us this far, and he will certainly carry us further."

Any article about St. Therese Little Flower parish cannot be written without highlighting the other heroic ways in which this church has always cared for those in need spiritually, emotionally and physically. The following information from their website highlights some of these accomplishments.

"In the mid-'70s, when the quality of housing in Blue Hills was on the decline, the church established one of the city's first (some say the first) community-based nonprofit organization set up to distribute federal neighborhood-improvement funds.

"Saint Therese continues to attract the attention of the greater Kansas City community.  The July 14th, 2009 edition of the Kansas City Star newspaper's Sunday Magazine insert featured our church as the the cover story.  The lengthy, seven-page article (with several large color photographs) provided an insight into our history, diversity, and community involvement.  In a separate commentary, the editor of the magazine wrote that reading the cover story moved her to want to attend a Mass at Saint Therese, even though she's not Catholic."

Truly a parish for all seasons of the Church, St. Therese has been used as another seed for the Ordinariate.