Toilet from over 2 MILLENNIUM AGO found in Jerusalem

Archaeologists in Israel have uncovered a private toilet that dates to seventh century B.C.E. Due to the era at which the toilet is believed to have been from, this is considered a marvelous discovery. Such an amenity at this time would have been a rare luxury. The fixture was found in the Armon Hanatziv neighborhood of Jerusalem, according to the Times of Israel. 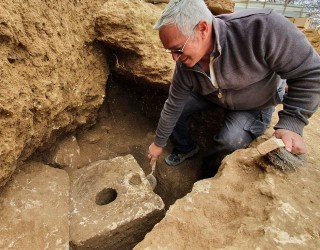 LOS ANGELES, CA (Catholic Online) - A cubicle was also found surrounding the toilet, as well as a deep septic tank. Both were carved out of limestone bedrock, and the bathroom measured 5-feet by 6.5-feet.
Though the septic tank and the cubicle room were carved from limestone, researchers remain unsure as to whether the toilet was too or came from a finer stone.
"A private toilet cubicle was very rare in antiquity, and to date, only a few have been found, mostly in the City of David," says Yaakov Billig, who directed the dig for the Israel Antiquities Authority (IAA), in a statement. "Only the rich could afford toilets. In fact, a thousand years later, the Mishnah and the Talmud discuss the various criteria that define a rich person, and Rabbi Yossi [suggests that] to be rich is [to have] a toilet near his table.'"
Inside the toilet lay 30 to 40 bowls, possibly vessels to hold aromatic oils or incense as early air fresheners.
However, this isn't the first toilet discovered in Jerusalem. Another was located in 2016. But this newly identified toilet was not connected to a larger system, according to the Smithsonian Magazine.
"The team will present its findings at the conference 'Innovations in the Archaeology of Jerusalem and Its Surroundings,' which is scheduled to take place Wednesday and Thursday both in Jerusalem and online," writes the magazine.