Amid protests, Iraqi archbishop calls for 'equal rights and dignity' for Christians 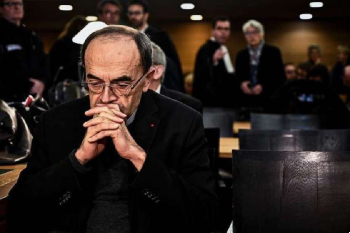 Archbishop Bashar Warda of the Chaldean Catholic Archdiocese of Erbil made the call as months of large-scale protests against Iraqi government corruption and perceived Iranian influence continue in the country - one protest last week in Baghdad was estimated to be around 200,000 strong.

Warda said on Tuesday that younger Iraqis are a major part of the anti-corruption protests.

"The corruption is at its high. There are no jobs, no security, the future is not there," Warda said in a meeting Jan. 28 with Rep. Jeff Fortenberry (R-Neb.). CNA was granted exclusive access to the meeting, held in Washington, D.C.

"So young people, they see that there is no light at the end of the tunnel, so they said 'okay, enough is enough, and we need reform,'" he said.

The protesters, Warda told CNA on Thursday, "want a respectful relationship with all the international community respecting the sovereignty of Iraq in all its levels, political, social, religious, everything.

"So the protests are, in a way, protesting for a better Iraq, not just for one community in that sense," he said, "a better Iraq which has a place for everyone, respecting the diversity and the richness of the Iraqi nation as such."

The archbishop addressed the United Nations Security Council in December, saying that the protests were a rejection of the post-2003 government, particularly its "sectarian-based constitution."

Christians, he said, had been welcomed into the protests, a sign of growing demand for a "genuine, multi-religious Iraq" built on a constitution that did not reflect Sharia law, but respected religious freedom.

Pope Francis met with Iraq's president Barham Salih on Saturday to discuss the need for stability in the country's future, as well as the importance of Christians to maintaining the "social fabric" of Iraq.

The Church, Warda said, supports this call for "change" and he encouraged citizens, especially the youth of Iraq, to show solidarity and push for a unified Iraq where Christians can enjoy equal rights and dignity.

The archbishop this week also reiterated his call for early elections, a request that has been echoed by Iraq's president and other political leaders.

"It reflects the needs and the demands of the young people, everyone, to make an actual change and to fight and to make the needed reform, to fight corruption, to provide jobs and better life," Warda told CNA on Thursday.

The delay in nominating a prime minister reveals a "blocked road," he said."You need an early election to bring new faces new blood, to the political process."

Another critical development, he said, must be the integration of Christians and other ethnic and religious minorities into the national security and police forces.

In the wake of the ISIS genocide, security for displaced Christians returning to their homes in Northern Iraq has been a primary concern. Christians in the area have reported harassment and violence at the hands of local militia groups. There have been allegations of Iranian influence of these militias to gain influence in the area through proxy conflicts.

If the local towns are policed by local residents, it would do much to re-establish order in the region once ravaged by ISIS and sectarian conflict, Archbishop Warda said.

"It's important to integrate all the people of Iraq into the army, into the police force, train them, especially in areas like the Nineveh Plain where they have so many young people ready and willing to protect and defend their villages," he said.

During the Tuesday meeting, Rep. Fortenberry said that such integration "would help rid the country of the shadowy militia quasi-military movement that is causing such instability."

Fortenberry successfully worked to include language in a budget bill passed by Congress last year, that the Secretary of State work with the Iraqi government to make sure that security forces "reflect the ethno-sectarian makeup of the areas in which they operate by integrating local populations into such forces."

USAID has also been working to ensure U.S. humanitarian assistance reaches ISIS genocide victims in Iraq, telling CNA last summer that around $367 million had been provided by the agency and the State Department under Vice President Mike Pence's initiative.

In September, USAID awarded $6.8 million to Catholic Relief Services, which partnered with the Archdiocese of Erbil to provide housing assistance for displaced families.

"In some ways, it's turning an aircraft carrier around in a canal," USAID administrator Mark Green told CNA last summer of the process of helping the genocide victims rebuild.

This week, Archbishop Warda said that the USAID money was starting to make a difference in the region.