Pope Francis prays for Iraqi people after 45 killed in protests

Pope Francis said Sunday that he was grieved to hear of the deadly violence against protesters in Iraq and expressed his closeness to the entire Iraqi people. 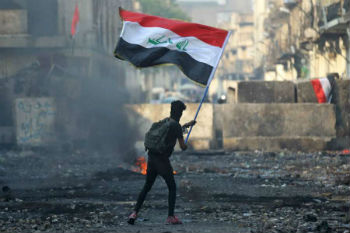 Iraqis protesting in the streets of Baghdad

Vatican City, (CNA) - Pope Francis said Sunday that he was grieved to hear of the deadly violence against protesters in Iraq and expressed his closeness to the entire Iraqi people.

"I am following the situation in Iraq with concern. I learned with grief that the protests in recent days have received a harsh reaction, which has caused dozens of victims. I pray for the dead and the wounded," Pope Francis said in his Angelus address Dec. 1.

"I am close to their families and to the entire Iraqi people, invoking from God peace and concord," the pope said.

Iraqi security forces shot and killed at least 45 protesters on Nov. 28, according to Reuters. The Prime Minister of Iraq Adel Abdul-Mahdi announced the following day that he would submit his resignation to parliament.

At least 400 people have died since anti-government protests began across Iraq in October. The Associated Press reports that Iraqi security forces have used live fire, tear gas and sound bombs against the thousands of Iraqis protesting in the streets of Baghdad.

Iraqi priest Fr. Salar Kajo from Tellesqof in the Nineveh Plains told CNA that people in Iraq are protesting because they have lived for years without human dignity.

"We are suffering from the corruption of the government, and also the division between the people. They divided us into Shia groups and Sunni groups and Christian groups. We are not feeling that we have a country, a nation," Kajo said Nov. 25.

"These protests are to tell to the world that we are not like this: We love each other and we do not want to be divided just because of Iran and just because of some political persons or political party," he said. "We want to live in full dignity of every human person."

Fr. Kajo's parish, St. George in Tellesqof, was burned by the Islamic State in 2014. He said that his church has now been rebuilt, but fewer than half of the families in his parish have returned to their homes, and until now the security situation has remained unstable.

The priest said that he wishes he could join the young people who are protesting to show his solidarity, but he is not permitted to go to the protests by the Kurdistan region.

Chaldean Catholic Archbishop Bashar Warda of Erbil, Iraq told CNA on Nov. 25 that the Church is in solidarity with the protest movement in Iraq: