We Must Pray for Peace - Before it's too Late

Free World Class Education
FREE Catholic Classes
A war against Iran would be swift and brutal with unknown consequences for the world.

The United States is moving closer to war with Iran as that nation escalates tensions in the region. However, a war would be a disaster not only for Iran, but for the entire world. As Catholics, we have a duty to pray for peace in the face of war. 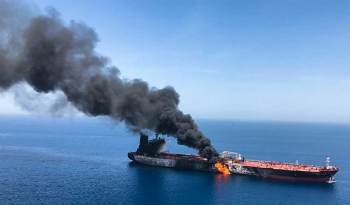 A tanker blazes after an alleged attack by Iranian or Iranian-backed forces.

LOS ANGELES, CA (California Network) - In 1979, Islamic conservatives staged a revolution in Iran which overthrew the Shah, and installed a religious government based on Shia Islam. Since then, Iran has faced political, economic, and at times, military threats from Israel, the West, and its neighbors including Iraq and Saudi Arabia. In response, Iran has embarked on a program to develop a nuclear weapon, which is believed will protect the nation from foreign-induced regime change.

However, in addition to pursuit of a nuclear ambition, Iran is a known sponsor of terrorism, and this fact, combined with a nuclear capability, is concerning to the world. Tremendous efforts have been made to compel Iran to abandon its nuclear ambitions. Some of those efforts have been so generous, they have provoked criticism. President Trump has gone so far as to withdraw from a treaty with Iran and has reimposed maximum pressure on Iran via sanctions.

Suffering from sanctions, but still sponsoring terrorists and conflicts across the Middle East, Iran has resumed its nuclear program. And in an effort to compel the world to ease sanctions, Iran has allegedly embarked on an escalating program of violent action. Actions to-date include the mining of tanker ships in the Gulf, the boarding and seizure of multiple ships, the shootdown of surveillance drones in the Gulf and nearby Yemen, and most recently, a strike against Saudi oil refineries.

The recent strike has succeeded in reducing Saudi oil output by as much as 50 percent for several days.

With each attack, it becomes more likely that Iran will be implicated beyond doubt, and that the United States and others will retaliate with counterstrikes.

Any American strike will be devastating to Iran. It's likely to be measured and proportional, but however large or small, Iran will not be able to resist the attack. And any attempt to strike back will result in ever-harsher retaliation. Ultimately, Iran's military will be rendered helpless.

However, the consequences would not likely end there. Measures taken by Iran will not only disrupt global markets, but they will increase tensions around the world. Hezbollah, for example, could be unleashed on Israel. Other terrorists could be unleashed on the United States or elsewhere.

The death toll could be enormous, and Iran could still develop a nuclear weapon for itself.

Unfortunately, given the nature of conflict and the personalities of those involved, disaster is more likely than peace. So, what are we to do as Christians?

Despair is tempting, but this is not what Christians are called to suffer. Instead, we are called to use the power of our votes, our voices, and our prayers to call for peace. We may call upon Jesus, Mary, and all the saints to intercede for peace. It has happened before, and it can happen again, such is the power of prayer.

For the moment, we are fortunate that President Trump has elected to follow a peaceful path, even if it means Iran may get away with inflicting some damage from time to time. The cost of occasional repairs are much lower than the costs of war. And in time, Iran could be persuaded to stop its own belligerence.

As Iran retreats from the brink of war, the rest of the world can too, thus reopening the lines of communication and the chances for a peaceful settlement.

What all nations want is peace and security. But the path to these is humility and restraint. As we arrive at a moment of danger, let us pray that cooler heads prevail, and that God moves the hearts of all towards everlasting peace and love.