An Iraqi church damaged and defaced by the Islamic State in 2014 was rededicated Thursday for the parish's celebration of the Feast of the Assumption of Mary. 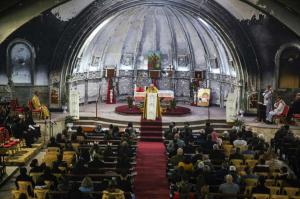 Qaraqosh, Iraq, (CNA) - The Syriac Catholic Church of Mar Behnam and Mart Sarah in the Iraqi city of Qaraqosh welcomed Archbishop Petros Mouche of Mosul, priests, and the local Catholic community to celebrate the solemnity.

Archbishop Mouche rededicated the church's altar, which had been burned by the Islamic State. After renonvations and rebuilding, the interior of the church, once charred black by fire, has been painted white.

Five years ago on the August Feast of the Transfiguration, the Islamic State devastated the city of Qaraqosh in Iraq's Nineveh Plains causing Christians to flee the region.

Now the Christian population in the city has been reduced to half of what it was. About 26,000 Christians have returned to Qaraqosh, Jahola explained.

During their occupation, the Islamic State desecrated the churches in Qaraqosh, in some cases writing battle instructions on church walls. St. George's Syrian Catholic Church was turned into a bomb factory and used as storage for supplies of deadly chemicals to make powerful explosives. The church of the Immaculate Conception was used as an indoor shooting range with mannequins as targets, according to Aid to the Church in Need.

The Church of Mar Behnam and Mart Sarah was charred black and its bell tower was demolished. "But we never stopped imagining how beautiful our church would be, once fixed," Fr. Jahola said.

Christmas Mass was celebrated in the church in Dec. 2018 during the church's reconstruction. The bell tower was rebuilt in 2019.

"We started the reconstruction project even before the liberation of the city, in the Nineveh Plains, when we were refugees," he said. "We have worked to rebuild houses and communities as believers, because this is the sense of belonging both to a parish and to a community."

ISIS was driven from Mosul in 2017, and the last remaining town of the original caliphate in Syria fell earlier this year. However many Christians who fled the ISIS onslaught in 2014 have not returned to their homes in Mosul and the Nineveh region.

Although the territorial ISIS caliphate is gone, security threats to Christians and Yazidis in the region remain. There are up to 15,000 ISIS fighters estimated to have remained in Iraq, according to the U.S. Commission on International Religious Freedom (USCIRF).

Christianity has been present in the Nineveh plain in Iraq - between Mosul and Iraqi Kurdistan â€" since the first century.

"What we have learned from the Gospel, from the Lord, is to be instruments of peace, and also to live peace," Fr. Jahola said.

"We try in every way to realize it here, where the majority is Muslim, where there is still someone who still bears hatred. We truly believe in this, in forgiveness and in leaving the past behind to continue towards the future," he said.