Pro-life advocates in Argentina have called for the acquittal of Dr. Leandro RodrĂ­guez Lastra, whose trial started May 13 in Rio Negro Province in Argentina for refusing to perform an abortion. 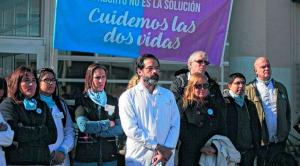 Buenos Aires, Argentina, (CNA) - RodrĂ­guez is the head of the department of gynecology at the Pedro Moguillansky Hospital in Cipoletti. In May 2017, he treated a 19 year old woman who was suffering severe pain due to ingesting misoprostol, a drug administered by an abortion group.

The doctor confirmed that the woman was almost 23 weeks pregnant and the baby weighed more than 1 lb. 2 oz., so in conjunction with the medical team and the hospital board, he decided not to terminate  the pregnancy.

RodrĂ­guez stabilized the patient and when the baby reached 35 weeks gestation, labor was induced. Days later, the baby was adopted and will soon be two years old.

However, RodrĂ­guez and Dr. Yamila Custillo, who also refused to perform an abortion, were cited by RĂ­o Negro legislator Marta Milesi, an advocate for the protocol of non-punishable abortion, which the province had adopted in the case of rape, which the woman alleged.

Custilla was dropped from the complaint in May 2018. But the case against RodrĂ­guez continued since the professional had allegedly stopped an abortion in progress.

Organizations including CitizenGo Argentina, Lawyers for Life, Doctors for Life, the March for Life, Medical Students for Life and Independent Federal Women delivered on May 14 more than 50,000 digital signatures calling for the acquittal of the doctor to Judge  Ălvaro Meynet and Governor Alberto Wereltineck.

"It is obvious that the accusation made by provincial representative Marta Milesi, who is an abortion activist, seeks to intimidate doctors into doing abortions, even when these pregnancies are advanced," the letter they delivered states.

"Dr. RodrĂ­guez Lastra fulfilled his duty and the Hippocratic Oath as a doctor, committed to the defense and care of life. We  hope that justice will be done," they concluded.

On Twitter, the hashtags #SalvarVidasNoEsDelito (Saving lives is not a crime) and #JusticiaParaRodriguezLastra (Justice for Rodriguez Lastra) were trending.

"We repudiate this persecution of a doctor who did his job: he saved both lives. Because of an illegitimate complaint, today there's an absurd trial. The only thing they want is to intimidate and impose their ideology," wrote Twitter user Ana Marmona.

Dr. Fernando Secin of Doctors for Life said "We are very  concerned about the persecution that we doctors are receiving." "We're seeing a justice system acting in concert with politics, instead of going after all those people like the La Revuelta (The Revolt) group that is illegally distributing medications and illegally practicing medicine."

Since the trial began, different groups have come to the RĂ­o Negro Court with banners expressing their opposition to the trial of RodrĂ­guez.

This article was originally published by CNA's Spanish-language partner, ACI Prensa. It has been translated and adapted by CNA.