They were founded three decades ago in southern Sudan, and named the Sisters of the Blessed Virgin Mary. But in a region dramatically affected by the South Sudanese civil war, they are usually known by the bright color of their habits. To most who know them, they are the "Blue Sisters." 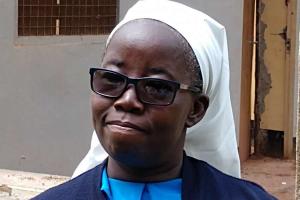 Juba, South Sudan, (CNA) - In the South Sudanese Diocese of Tombura Yambio, Bishop Edward Hiiboro Kussala has tasked them with providing permanent assistance to the many women, including young girls and teenagers, who have been raped, abused or abandoned amid the violent conflicts that have plagued the region for years.

"There is a major stigma that falls over these mostly young women who are victims of the violence of war," said Sister Ester, local superior for the small community of the four "Blue Sisters" who help with the recovery of some 100 women in a facility in the town of Yambio, next to the diocesan chancery.

"The sisters are an incredible blessing," Bishop Hiiboro Kussala told CNA. "They were founded by my predecessor, Bishop Joseph Abangite Gasi upon the request of the Sudanese bishops, who realized that a community of African sisters was sorely needed."

According to Sister Ester, the women living at the shelter vary in age and with regard to their level of trauma.

"Several of them remain still in a state of shock, barely aware of their reality," she said. "Our ministry is to help them to recover from the consequences of the terrible suffering they have endured, through love, patience, prayer and therapy."

The sisters help some women cope with AIDS, and others to raise their children, many of whom were conceived in rape. According to Sister Ester, "the connection with their children, surprisingly, is a significant part of the healing process, and not part of the trauma, as some tend to believe."

Internal violence has been endemic to Sudan since it gained independence from Great Britain in 1956. At around that time, the Muslim, Arab-influenced north of the country launched an Islamization campaign against the mostly Christian south, leading to decades of fighting.

In 2011, South Sudan became an independent country, but in in December 2013, President Salva Kiir Mayardit accused his former deputy Riek Macho of attempting a coup, unleashing a civil war that Pope Francis himself has tried to stop by inviting both leaders to a recent spiritual retreat at the Vatican. The conflict has generated more than 1.5 million displaced people.

Although the civil war has significantly abated in this part of South Sudan, the shelter still welcomes abused women everyday. So the Blue Sisters have embarked on an ambitious project to expand their facility and improve their service.

"Thanks to the significant financial help of the Sudan Relief Fund, we are a few months away from finishing a brand new facility, where the sisters, our experts and  volunteers will be able to provide the best treatment possible to our women," Sister Ester told CNA.

"Our goal is to gradually integrate these women into society with the adequate spiritual and mental stability, and with a clear plan for their future," she also said

The "Blue Sisters," who only go by their religious names, and whose motto is "With Mary, we bring Christ to the World" were originally organized and directed by Italian Comboni Missionary Sisters, but a decade ago, their community became its own, African-led, institute of diocesan right.