As most Catholic churches remain closed across Sri Lanka, following the Easter bombings that claimed more than 250 lives, one parish in a small eastern village celebrated the ordination of a new priest on Tuesday. 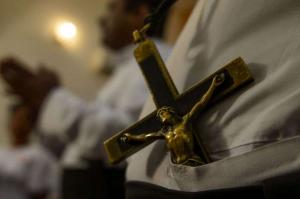 Thannamunai, Sri Lanka, (CNA) - Father Norton Johnson told the Associated Press that it is likely the first public Mass held in the country since eight suicide bombers attacked two Catholic churches, a protestant church, three hotels, a residence, and a zoo on April 21.

All public Masses have been cancelled since the Easter Sunday attacks, with authorities continuing to search for those behind organizing the violence.

However, invitations for the priestly ordination in the village of Thannamunai had already been issued, so the Mass went ahead as planned, with increased security measures. Instead of a few thousand participants, several hundred attended.

"People wanted to celebrate Mass, they wanted to participate in this, but they '" even myself '" were afraid," Johnson told the AP. "However, security personnel gave us good protection."

The Mass comes at a time when the police have advised caution over potential future attacks, government officials have increased restrictions, and Catholic leaders have temporarily closed churches. A televised Mass was held in the private residential chapel of Cardinal Malcolm Ranjith, the archbishop of Colombo, last Sunday.

According to the AP, authorities had urged extra vigilance, as the church is located on the edge of a Muslim community, near where Zahran Hashim '" believed to be one of the masterminds and suicide bombers behind the Easter attacks '" had preached calls for jihad.

Johnson said fear is seen among both Christians and Muslims communities, and stressed that there needs to be unity.

"In every religion, every race, there are extremists. They do certain things. But we can't blame one community for these problems," he told the AP. "The Muslim community, they are afraid, and they are sorry about this incident. And what I can say is we are with them."

Hashim was a leader of the militant jihadist group the National Thowheed Jamaath, which is believed to have organized the attacks on Easter. The government banned the NTJ on Saturday, allowing authorities to confiscate its property and assets. The government also issued an emergency law restricting face-covering veils.

Although the involvement of the Islamic State is not confirmed, images were released shortly after the attack of the alleged bombers declaring loyalty to Abu Bakr Al-Baghdadi, the leader of ISIS.

A video was released on April 29 by Al-Baghdadi, only the second televised appearance of the leader to be released since he declared the creation of a caliphate in 2014. In the video, the leader praised the attack in Sri Lanka, claiming it to be revenge for the defeat of ISIS in the Syrian town of Baghouz.

With more than 100 people already arrested, police are looking for some 150 additional people believed to have ties to ISIS, according to the BBC.