One week after the Sri Lanka Easter bombings, authorities continue to seek those responsible for the violence, while enacting new security measures throughout the country. 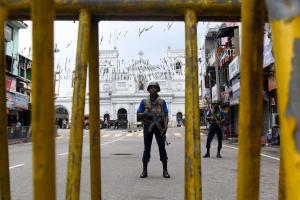 Colombo, Sri Lanka, (CNA) - With police urging caution over potential future attacks, Catholic leaders have temporarily closed all of the nation's churches, and the government has enacted an emergency law to restrict face-covering veils.

On Sunday, Cardinal Malcolm Ranjith, the archbishop of Colombo, highlighted the difficulty of this current time during a televised Mass at a private chapel in his residence.

"This is a time our hearts are tested by the great destruction that took place last Sunday," said Ranjith, according to the Associated Press. "This is a time questions such as, does God truly love us, does he have compassion toward us, can arise in human hearts."

Rivalry among these politicians is believed to be a factor in the mismanagement of relevant information that could have helped prevent the eight bombings, occurring at two Catholic churches, a protestant church, three hotels, a residence, and a zoo on Easter Sunday. More than 250 people were killed in the attacks.

Accusations of failure to act on warnings of the attacks also led to the resignation of the chief of police and defense minister.

Later on Sunday, the president used an emergency law to ban all face coverings that hinder identification. This restriction had been proposed last week, but it was supposed to be delayed until further consultation with Muslim clerics. It went into effect on Monday, receiving push back from Islamic leaders.

Hilmy Ahmed, vice-president of the Sri Lanka Muslim Council, told the BBC that the decision was pointless, as the local Muslim community had already told women not to wear face veils for security reasons.

"We strongly criticise the decision. We will not accept the authorities interfering with the religion without consulting the religious leadership," said Ahmed.

On the previous day, the government also banned the militant jihadist group the National Thowheed Jamaath, which is believed to have organized the attacks on Easter. The group is thought to have ties to the Islamic State. The government's ban allows authorities to confiscate NTJ property and assets.

Although the involvement of Islamic State is not confirmed, images were released shortly after the attack of the alleged bombers declaring loyalty to Abu Bakr Al-Baghdadi, the leader of ISIS.

A video was released on April 29 by Al-Baghdadi, only the second televised appearance of the leader to be released since he declared the creation of a caliphate in 2014. In the video, the leader praised the attack in Sri Lanka, claiming it to be revenge for the defeat of ISIS in the Syrian town of Baghouz.

With more than 100 people already arrested, police are looking for some 150 additional people with ties to ISIS, according to the BBC.

A violent skirmish broke out during a police raid on a militant safe house near Sainthamaruthu on Friday. Following an exchange of gunfire between the police and terrorists, three men detonated suicide bombs, killing 15 people, including six children and three women.

In addition to a variety of explosive material found at the safe house, the police discovered the family members of Zahran Hashim, an radical Islamist preacher who has been identified as one of the leaders of the Easter violence.

Abdul Cader Fathima Kadiyar, Hashim's wife, was discovered at the location, along with their four-year-old daughter. Both have been hospitalized. Hashim's father and two brothers may have also been killed during the skirmish, but authorities have not confirmed this, according to the Washington Post.

During the televised Mass over the weekend, Cardinal Ranjith emphasized the dignity of every person and the love God has for them. He stressed that killing in the name of God is unacceptable and challenged his listeners to create a culture of encounter.

"In the name of God, let us extend our hands to others," said the cardinal, according to Eleven Myanmar. "We as a nation must learn to appreciate differences and love each other."