Archbishop Petros Mouche heads the Syriac-Catholic Archdiocese of Mosul, Iraqâ€ s second-largest city, which was captured by ISIS in the summer of 2014. 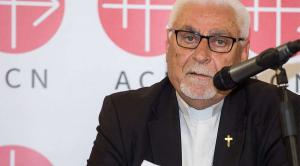 Mosul, Iraq,  (CNA) -  Today, with ISIS ousted from Mosul and the Nineveh Plains, Christian communities are slowly coming back to life. Thousands of Iraqi faithful, having spent upwards of three years in exile in Kurdistan, have resettled in their former homes, villages and towns.

In an interview with Aid to the Church in Need, Archbishop Mouche â€" who also oversees the Syriac-Catholic Church in Kirkuk and Kurdistan â€" takes stock of the situation:

"The positive change that has occurred in our region â€" no one can deny it. Things may not yet be at the required level, but there are very clear and concrete signs of progress. But no credit goes to the state: credit belongs to the faith-based and humanitarian organizations that rushed in to support us.

"However, we still lack the funds to complete the reconstruction of all the homes that were very badly damaged or completely destroyed; we are waiting and hoping that governments, like those of the United Kingdom and Hungary, will step in and help us on this front.

"As for the creation of jobs, there are very few initiatives; we have made many requests to several American, British, French and even Saudi Arabian companies to launch some major projects in the region, so that our people can survive and especially our young people can find work â€" but we are still waiting. The Iraqi government has made many promises, but few projects have been implemented. Our confidence in the state is low. We are convinced that, offered the right opportunities, many of our people would return to Qaraqosh â€" if they could live there in peace and stability.

"The problems will not end as long as greed prevails; when only the strong prevail and the rights of the poor are crushed; as long as the state is still weak and the law is not applied. But our hope is in God and we pray that ISIS will never return. For their safety and overall well-being, Christians depend on the rule of law and the integrity of government â€" that is what can guarantee safety for us and the Church.

"There is not one specific and well-known party with plans to attack Christians; however, whoever has ambitions to grab our land loses the sense of citizenship and does not respect the rights of others. Such parties donâ€ t even feel comfortable with our survival and ongoing presence.

"There are many goodwill visits by official delegations and many good words are spoken â€" but nothing happens. Good intentions are not enough. On the part of some, there is not sufficient respect for our rights; and Christians do not use violence to defend themselves, but appeal to mutual respect. But if that is not answered in kind, more and more Christians will emigrate. This hurts all of us, who love this land, our history, our civilization and our heritage.

"The Church as a whole â€" its bishops, pastors and laity â€" is sparing no effort to claim the rights of its people and to secure an area where we can live in dignity and peace. Church leaders do their best to instill confidence and hope in our people, but without forcing anyone to return, stay or be displaced. That decision each family must make for itself, the decision that guarantees its dignity, its future, especially the future of the children.

"Here is my message to the Christians who have left Qaraqosh, wherever they may be â€" still in Iraq, or whether they are already in foreign lands:

"Qaraqosh is the mother who has fed you the love of God, the love of the Church and the love of the land; it will remain your mother despite her sadness at your absence; the city is your heart that is still attached to you and its eyes are watching all your steps. It is happy when you are happy, and it is worried about your destiny when you are not happy. Its doors remain open to you. At every moment Qaraqosh is ready to embrace you again â€" Qaraqosh asks that you remain faithful to the pure milk that it gave you!"
Since 2014, Aid to the Church in Need has been on the forefront of supporting Iraqi Christians with projects totaling more than $40M, including humanitarian aid for faithful who fled to Kurdistan to escape ISIS, the repair and rebuilding of Christian homes on the Nineveh Plains, and, currently, the reconstruction and repair of Church infrastructure in northern Iraq.