Indian bishop accused of rape could face charges this week

The bishop accused of serially raping a nun could face criminal charges this week, as Indian police say they will ask a court to charge him with rape, evidence tampering, and menacing his accuser. 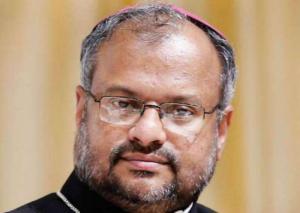 Jalandhar, India, (CNA) - In June 2018, a member of the Missionaries of Jesus religious congregation accused Bishop Franco Mulakkal of Jalandharr of sexually assaulting her 13 times between 2014 and 2016.  In a 72-page complaint to police, filed June 29, the nun alleged that the bishop sexually abused her more than a dozen times over two years.

The bishop maintains his innocence. He was arrested Sept. 21, 2018 amid protests calling for a police investigation of the allegation. He was subsequently released on bail.

Police in the Indian state of Kerala now say they have enough evidence to formally charge Mulakkal, and that they will file a charging document in criminal court this week, the Wall Street Journal reported April 8.

A judge will determine whether the bishop will face formal criminal charges.

"After our extensive investigation we have come to a conclusion that what the nun alleged seems to be truthful," police inspector general Vijay Sakhare told the Wall Street Journal.

"We have strong evidence to get the bishop prosecuted."

Mulakkal, 55, was temporarily removed from the administration of his diocese shortly before he was arrested. The bishop claims that the nun accused him of rape as retaliation, because he had ordered an investigation into a claim that she was having an affair with a relative.

On Oct. 22, 2018, Fr. Kuriakose Kattuthara, a key police witness in the case, was found dead in his room. The priest's family alleged foul play.

Mulakkal was ordered by police investigators last year to turn over to them a laptop believed to contain evidence in the case, but Indian officials have not yet reported whether the bishop turned over the computer as ordered.

Police are expected to file a charge petition in court on Tuesday, the Wall Street Journal reported.