Rebuilding broken hearts: A Syrian sister's prayer for her country

As the people of Syria work to rebuild the cities, hospitals, homes, and schools that were destroyed through years of conflict, they also face a more difficult task, according to one Syrian Catholic sister: repairing broken hearts. 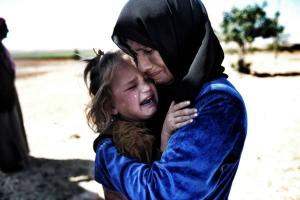 Aleppo, Syria, (CNA/EWTN News) -"It is easy to rebuild a house, but it is difficult to rebuild a broken soul," said Sister Annie Demerjian, of the Community of Jesus and Mary.

The Syrian sister, who has remained in Aleppo throughout the nearly 8-year Syrian Civil War, told CNA that there is a great need for psychological healing from the trauma and anguish her people have suffered during the conflict.

"It is very hard to lose someone, harder when the death [is] not in a normal way -- either by killing or by bombs or persecution," Demerjian said.

Many Syrians are coping with such a loss. In addition to violence at the hands of ISIS, more than 400,000 people have died since the Syrian Civil War broke out in March 2011, according to estimates. At least 28,226 of these casualties were children, according to the Syrian Network for Human Rights.

"The war has robbed children of their childhood and innocence and killed the brightness in their eyes; they have been spectators and unwilling actors in a hell they did not create," Sister Demerjian shared at a prayer vigil sponsored to Aid to the Church in Need last fall.

Demerjian cited a statistic from UNICEF that an estimated 3.7 million Syrian children have been born since the Syrian Civil War began. "Born and raised during this time, they know only of destruction, violence and death," she said.

She particularly noted the pain of children who have lost one or both parents.

"It is very hard to keep this great wound, you know. I ask the Lord to heal the wounds in their hearts and to make them accept with a heart of forgiveness."

Children have been impacted in other ways as well. Syria has the lowest school attendance rates in the world after tens of thousands of teachers fled the country and one in three schools closed due to damage.

Hospitals have also become military targets during the civil war. More than 300 healthcare facilities in Syria have been attacked and at least 768 medical professionals killed in the conflict, according to Physicians for Human Rights.

"For years, priests and sisters have lived this nightmare alongside our people...There were many long nights without electricity, which meant working and praying by candlelight, often under heavy shelling. It meant hearing of all the deaths, and waiting and wondering who would be next," Sister Demerjian said.

While the Islamic Stateďż˝ s territorial caliphate has collapsed, an estimated 20,000 to 30,000 ISIS fighters still remain in Iraq and Syria today, according to a recently released report by the Center for Strategic and International Studies. And with government forces focusing on the few remaining rebel-held territories in the country, the civil war in Syria may be winding down, but it is unclear whether the nation will find peace in the postwar era.

Sister Demerjian requested prayers for those directly involved with the conflict. "I want to pray for every person who carries arms, who has killed other people, that the Lord will enlighten their mind and their hearts to see the truth, to see that life is a gift from the Lord and only He has the right to take it," she said.

Many Christians are coping with a sense of loss, not only from those who have died, but also from the loss of community due to emigration, she said. According to the U.N., more than 11 million Syrians have fled their homes.

"Many Christians emigrated to the West, while those without means and connections fled to Lebanon, Jordan, and Turkey. The Christian population in Syria has fallen from 1.4 million in 2011 to an estimated 450,000," Demerjian said.

However, the sister said that she is encouraged by the great faith she finds in the Catholics who have chosen to remain.

"Anytime we ask the faithful how they are coping their answer is: 'Thanks be to God.' This is a sure sign of the hope and trust they have in the Lord Jesus, who is crucified with us and who will not leave our side."