A Nigerian priest who was kidnapped on Christmas Eve recalled his experience after Mass this week, saying prayer is what saved him. 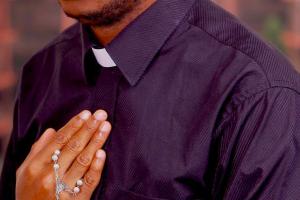 Abuja, Nigeria, (CNA/EWTN News) - Father Cajetan Apeh, a recently ordained priest assigned to St. Theresa's Parish in Anam, was kidnapped along with the church's pastor on Dec. 24. The two priests were ambushed while returning from gathering supplies in preparation for the visit of Cardinal Francis Arinze on Christmas Day.

According to Vanguard Nigeria, Apeh described the four-day ordeal to the congregation after Mass on January 1, the Solemnity of Mary, Mother of God. The Mass took place at St. Joseph's Church in Enugu Ezike.

Apeh said the priests, who initially thought it to be robbery, were abducted by four Fulani herdsmen with AK 47s and left to survive with very little food and water.

"After searching and taking all our possessions, including some loafs of bread, they led us into the bush where two of us were given half a loaf of the wheat bread they took from us for four days before our release to our superior, who drove from Enugu to Anam on the instruction of the herdsmen," he said, according to Vanguard Nigeria.

He said they were not permitted to talk and we given only one sachet of water to share per day, and were not provided with adequate clothing to keep warm in the bitter cold.

By December 26, Apeh said, the health condition of the parish pastor had worsened. Because the herdsmen would not let him take necessary medication, his blood pressure was high and he was feeling weak.

Apeh said the kidnappers had tried to hold the priests for ransom and were communicating with their superiors.

"They asked us our bank account numbers and we told them that we had no personal bank accounts, that everything belonged to the church. They asked if I was married, I said no, because I am a Catholic priest."

Several authorities in Anambra, including the Police Mobile Force and Federal Special Anti-robbery Squad, had been involved with a massive search for the priests. As a result of the joint operations, the abductors were forced to release the two men on Dec. 27. Abeh said prayer was a major factor in their release, Vanguard Nigeria reported.

"Due to your prayers and those of others throughout the world, we were released to our superior who travelled to Anam from Enugu, unaccompanied by any policeman or security agent."