What happened to the Catholic Knights Hospitaller?

Free World Class Education
FREE Catholic Classes
From fighting alongside the Knights Templar to care for the poor, these knights still serve the Pope.

Catholic Online School has a great course on the Knights Templar, which you can take here. However, several students have asked about another great order of Catholic knights, the Knights Hospitaller. What happened to these noble soldiers? 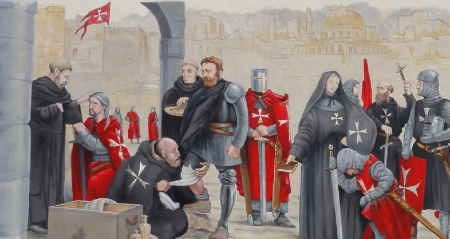 LOS ANGELES, CA (California Network) - The Knights Hospitaller still exist, but in a different form and with a different name. Today, they are known as the Knights of Malta. Although they no longer serve their ancient military purpose, they remain in service to the Catholic faith and the poor.

The Knights Hospitaller were founded in 1099 by the Blessed Gerard de Martigues, a lay member of the Benedictine Order. Gerard founded the order as the "Order of Knights of the Hospital of Saint John of Jerusalem." He was inspired by the success of the First Crusade (1096-1099), and served as the first grand master of the order.

In the early 7th century a hospital was built in Jerusalem to serve Christian pilgrims. The hospital stood for four centuries before it was destroyed by Islamic forces in 1009. It was soon rebuilt and the Order of St. Benedict cared for the pilgrims, as well as the sick and dying. After the First Crusade, Gerard asked the Pope for permission to form an order of monastic knights. This was granted along with land and money. Soon, the order began escorting pilgrims through the Holy Land and it became a significant military force. The Knights Hospitaller were simultaneously a charitable order and a military formation.

The Knights Hospitaller fought alongside the Knights Templar in the Crusades, and the order continued to flourish until the fall of the Kingdom of Jerusalem in 1291. After this, the knights found themselves confined to Cyprus and several smaller islands such as Rhodes and Malta.

In 1312, the Knights Templar were dissolved by Pope Clement V, and much of their wealth and property was transferred to the Hospitallers. By this time, the knights were known as the Knights of St. John, and the Knights of Rhodes. On Rhodes they were forced to remilitarize and fight Barbary pirates and Islamic attempts at invasion. Rhodes would eventually be conquered by the Ottomans.

In 1530, Pope Clement VII granted the knights a permanent headquarters on the island of Malta. From there they continued to fight against the Islamic forces attempting to conquer and pirate the Mediterranean. In 1565, they defeated an Ottoman attempt to conquer the island.

By the 17th century, the Knights Hospitaller found themselves facing a crisis. The loss of the holy Land and the decline of the Islamic threat in the Mediterranean, along with the Protestant Reformation led to a decline in support. Less and less money was sent from mainland Europe, and Malta was too barren to support the order. Some knights hired themselves out as mercenaries. A few became rich and took wives, inviting scandal. Some even resorted to piracy themselves, attacking Muslim ships.

The order and its island languished until Napoleon Bonaparte easily took the island in 1798 as part of his expedition to Egypt. The knights were dispersed, traveling as far as Russia to find sanctuary. By the 19th century, the order was greatly diminished and found very little support outside of Russia and Sweden. However, the leaders of the order refused to give up their claim on Malta.

In 1834, the order found sanctuary in Rome and charitable work became its primary work once more. The order was active in both World Wars, providing care for the sick and wounded and charity for the poor and suffering.

Today, the order is a lay organization. It provides humanitarian assistance to those in need and assists with international relations. The order is Catholic and venerates Our Lady of Philermos as its patroness. Although the order has no territory, it is considered a sovereign entity. The knights have diplomatic relations with 112 states, signs treaties, and even offers a passport, coins, and stamps.

The order is remarkably large, employing more than 120,000 people as workers and volunteers in more than 120 countries. Until the 1990s, the order's leadership had to be of noble birth, but now any person can rise through the ranks by election. The order now has an annual budget of more than 1.5 billion euros and is funded by European governments and private donations.

To learn about the counterpart of the Knights of Malta, take the FREE, exciting course, The Knights Templar with 'Certificate of Completion' at Catholic Online School!