Pope Francis called for peace and negotiations as the world slips closer to nuclear conflict than it has in decades. Rumors are circulating on social media sites such as Twitter, suggesting the United States is now on DEFCON 2, to match Russia's alert status. 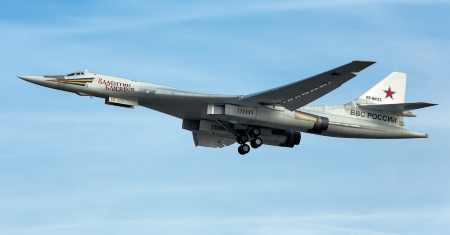 A Tupolev 160 "Blackjack" bomber, the Russian answer to the American B-1 bomber. The Tu-160 is capable of launching nuclear weapons, and is part of the formidable Russian nuclear arsenal.

LOS ANGELES, CA (California Netwok) - The war in Ukraine was supposed to be over by now, but it continues five days after it began. Reports indicate Ukrainian resistance is stronger than expected, and Russian forces are running low on critical supplies including fuel and food.

Despite the difficulties faced by Russian forces, most experts believe it is only a matter of time before the Russians wear down Ukrainian resistance.

In response to Russia's invasion, most of the world's countries have imposed sanctions on Russia. And NATO is reinforcing its member nations in Eastern Europe. In response, President Vladimir Putin ordered Russian nuclear forces to go on high alert, which is in turn, prompting a similar response by the United States and allies.

According to some rumors, the United States is at DEFCON 2, which means American forces are ready for full-scale war in as little as six hours' time. DEFCON refers to "defense condition," and there are five levels with 5 being peacetime footing, and 1 being a war footing. The United States has only been at DEFCON 2 twice in history, the first time during the Cuban Missile Crisis, and the second time on the eve of Desert Storm in Iraq.

But is the United States really at DEFCON 2? It's unlikely. DEFCON 3 is much more realistic. In either case, the military does not disclose the current DEFCON level. It might be possible to guess correctly by comparing information on the positions of U.S. military forces. For example, whether or not bombers presumably armed with nuclear bombs are parked with engines running, or airborne, or if ships and submarines are putting to sea on short notice.

So far, there is no solid evidence of this. Although Russian nuclear forces are on high alert, there is little likelihood that nuclear weapons will be used, even in a tactical manner, because their employment is unnecessary for Russia to win the conflict.

The real danger from this development is that of miscalculation. An accident or a mistake is now more likely to trigger a dramatic, automatic response, instead of a deliberate decision made by cooler heads. Still, it's humans who make the decision to launch these weapons, and it's pretty unlikely that anyone would order their use, even in defeat.

While the nuclear matter gets all the attention, there are more mundane and serious problems that confront the world. First, there is the matter of the Chernobyl site, which is near Kyiv, the capital of Ukraine. The site is now occupied by Russian forces, and it is unclear if the site is secure. There was an initial report of a spike in radiation levels, but this has not been confirmed by other sources.

Of greatest danger is the effect of the conventional warfare which is producing more wartime casualties in Europe than anything seen since WWII.

To end the bloodshed, Pope Francis has appealed for peace and offered to broker talks between the two sides.

Both Russia and Ukraine are also engaged in talks today in Belorussia, however it is unlikely those talks will succeed. Meanwhile, in the very same country, elite Russian troops and armored divisions stand ready to invade Ukraine on another front. When the attack goes in, it will likely crush the Ukrainian defenses in the capital.

The war in Ukraine is likely to end in days, at most. Russia will win the war, but the insurgency that follows will be bloody. Meanwhile, the rest of the world will need to ponder what has happened here and seek to find better ways to avoid it happening again.