A researcher from the United States Holocaust Memorial Museum told CNA that she hopes the recent opening of the Pius XII archives in the Vatican will give historians a fuller, more transparent image of the wartime pope. 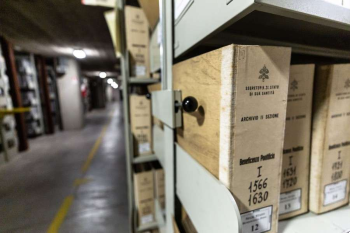 Washington D.C., (CNA) - A researcher from the United States Holocaust Memorial Museum told CNA that she hopes the recent opening of the Pius XII archives in the Vatican will give historians a fuller, more transparent image of the wartime pope.

Dr. Suzanne Brown-Fleming, the museum's director of international academic programs, has been unable to travel to Rome to view the archives due to the COVID-19 outbreak, but told CNA that she hopes to make the trip in April.

Brown-Fleming spoke to CNA Thursday about what she expects to find in the archives.

The Vatican officially opened the archives, which cover Venerable Pius XII's entire pontificate March 1939 through October 1958 on March 2. It is the first time scholars have been granted access to the  approximately 16 million documents they contain.

Pius XII remains a disputed figure, with some historians criticising him for not making a more explicit denunciation of Hitler and the Nazis, and others pointing to Mit brennender Sorge, his 1937 encyclical to the Church in Germany, and the limits imposed on him by the Lateran Treaty.

After examining the documents in the archives, Brown-Fleming said that historians will "definitely have a more fair reading of [Pius XII]."

"I think that on both sides of the argument there has been picking and choosing as to 'let's show this document and interpret it this way and ignore these five documents,' and his critics have done the same," she said. "So I'm not sure either side has been completely fair, because there's been no access to the full documentation."

Brown-Fleming thinks that the public opinion will likely end up "somewhere between the two polar opposites that we're seeing now," but that this will not happen until the archives have been fully studied.

"But it will be a fair and transparent reading," she said.

Pius XII died in 1958, his cause for canonization was opened in November 1965, by Pope (now Saint) Paul VI during the final session of the Second Vatican Council. On December 19, 2009, Pope Benedict XVI declared him "Venerable," meaning the Church has determined that he led a life of heroic virtue.

A practicing Catholic, Brown-Fleming told CNA that she hopes she is able to find documentary proof that the Church and individual Catholics in Europe invoked the tenets of their faith and tried to save their Jewish neighbors.

"Did they respond in a uniform 'love thy neighbor' way, or did they parse in their minds? I think it's going to be very interesting to know," she said.

A big question, and one that Brown-Fleming hopes will be answered by the archives, concerns Pius XII's actions in September 1943, when Rome's Jewish population was rounded up and deported.

"There's a big question around whether Pius XII gave orders to have Roman Jews hidden. Many Jews were hidden including on Vatican grounds," she said. "Did he order that? Did he know about it and say, okay, 'this is not a good idea because it puts Vatican property in danger'? Did he say, 'yes, please do this and save who you can'?"

"We know that Jews were rescued by Catholic families in Italy and in France," said Brown-Fleming. She told CNA that she was hopeful her time in the archives will reveal the motivations behind why these families chose to risk their lives to save people: "Was it because of messaging from the pope or was it spontaneous?"

Another question Brown-Fleming wants the archives to answer is what Pius XII knew in the post-war era, when a Vatican "ratline" enabled many former Nazis to escape to South America.

"In the Cold War period, many Nazis escaped to South America with the help of the Vatican lower level officials," she said. "But how much did the Pope know about this? That's a very big question." She is also hoping to find information about Pius XII's personal attitude towards the Jewish people, which is "something that's very hard to discern in public messaging."

Once she is granted permission to travel to Italy and examine the archives, Brown-Fleming intends on starting her research in the Vatican Apostolic Archive. She explained that there are four reading rooms in the archive, and that the first room is dedicated to indices. She says the plan is to look for certain keywords in the indices.

Once those keywords are found, Brown-Fleming will request the entire folder. She hopes that, similar to the 2003 opening of Pius XI's archives, the United States Holocaust Museum would be given permission to reproduce the some of the contents of the archives and keep them in Washington.

Regardless of what is found, Brown-Fleming said she is glad that there will finally be answers about the legacy of Pius XII, and she is confident that whatever is uncovered will be a positive move for the Church.

The archives will "kind of settle those questions" regarding Pius XII and the actions of the Church during World War II, "even if the answers aren't always good. And I don't think they always will be, because we're talking about human beings and even a pope makes mistakes."