The new chairman of the German bishops' conference has said that calling for the ordination of women could be a conclusion of the two-year "synodal way" being undertaken by the Church in Germany. Bishop Georg Batzing of Limburg said in a radio interview Monday for International Women's Day that such a conclusion would require Roman approval. 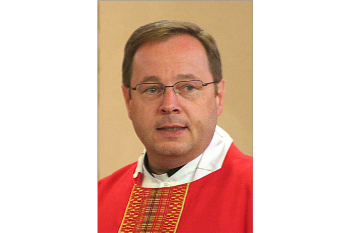 Berlin, Germany, (CNA) - The new chairman of the German bishops' conference has said that calling for the ordination of women could be a conclusion of the two-year "synodal way" being undertaken by the Church in Germany. Bishop Georg Batzing of Limburg said in a radio interview Monday for International Women's Day that such a conclusion would require Roman approval.

In an interview with WDR5 March 9, Bishop Batzing answered questions on the role and future of women in the Church. He said that if the "synodal way" calls for the ordination of women to the diaconate, Rome would have to grant an indult to allow German bishops to begin ordaining women. In that event, he said, it would be important that the synodal assembly call for the change with "a very strong voice."

Batzing said that if bishops and laity united to present a "strong appearance," Rome would be more likely to respond positively.

Speaking after his election last week, he said that the role of women "is the most pressing question we have concerning the future" of Church. "That is where the Church really has a backlog. We won't be able to wait. Women must be given equal rights," the bishop said on the ARD morning program.

Batzing also said that Pope Francis "did not take a position" on the possibility of ordaining women to the deaconate, which last year's Synod on the Amazon recommended for further consideration, and that the subject was open for further discussion.

The bishop's Monday interview coincided with International Women's Day. In Germany, the day was marked by demonstrations outside Catholic churches and cathedrals by organizations calling for "equal" participation for women in the life of the Church through sacramental ordination to all ranks of the clergy. In Cologne, and estimated 700 protestors, led by the group Maria 2.0, protested the Church's teaching on the reservation of priestly ordination to men alone and called for an end to clerical celibacy.

The two year "binding synodal process" is being conducted by the German bishops in partnership with the Central Committee of German Catholics (ZdK). Its first full assembly convened in January and its working groups are preparing proposals for reform on matters of Church teaching and discipline on marriage, ordination, clerical celibacy, and sexual ethics.

Batzing has said he "fully supports the synodal way," calling it "at the center of our considerations" for the Church in Germany."

At the conclusion of the process, different proposals will be put to the synodal assembly for a vote, with bishops and lay people participating equally. The ZdK leadership have called for the Church to ordain women and to bless same-sex unions.

Batzing was elected chairman of the German bishops' conference on March 3, replacing Cardinal Reinhard Marx of Munich and Freising, who declined to seek reelection, citing his desire to spend more time in his diocese and allow a younger generation of bishops to lead the Church in Germany.

In the past, Batzing has endorsed positions calling for a revision of Church discipline on the Eucharist, but insisted that any deviation from universal practice requires Roman approval.

In September, 2019, Batzing co-chaired an ecumenical working group of Catholic and Protestant theologians which produced a document, titled "Together at the Lord's Table," which concluded that "mutual participation in the celebration of the Lord's Supper / Eucharist is theologically justified."

At the time of the document's release, Batzing noted that he had joined the group late in the process and initially asked himself "whether [he] can agree to this or not."

"But I have to say, the theological justification in this basic paper is so clear to me that I did not want to and could not escape."

In the Catholic Church, only baptized Catholics in a state of grace are permitted to receive Communion. The Code of Canon Law outlines very narrow circumstances in which non-Catholics may be admitted to Communion. While bishops in several northern European countries have repeatedly called for Eucharistic intercommunion, this has been rejected by Rome.

Acknowledging this at the time of the report's release, Batzing said that his own certainty on the issue did not mean he was free to alter sacramental discipline.

"However, this does not mean that I am a bishop alone, but the theological discussion must now be raised to the level of a teaching reception, i.e. an acceptance by the Magisterium of the Catholic Church. And this process is pending," he said.